Offering #4 from La Venta is perhaps the most dramatic assemblage of Olmec small stone figures yet discovered. As found in situ (in the original place and arrangement that the Olmec people left them), the group consisted of seventeen stone figurines arranged in front of a flat row of six slender jade celts, all securely set upright in a base of sand. Only fragments remained of one figure, but the surviving sculptures illustrate a striking, enigmatic scene: A single figure stands with its back to the celts (see granite figure in diagram left), while four figures appear to process in front of this figure, apparently walking toward a fifth figure that faces them (see opposing figure in diagram). The ten remaining figures gather in a close semi-circle, facing the celts as if watching the procession.

The material and style of this group of figures represents the artistic culmination of Olmec small stone carving. After focusing most of their efforts on making large stone sculptures during the Early Formative period (2000–1000 B.C.E.), the Olmec of the Middle Formative period began to produce these much smaller, portable stone sculptures as well.

The stone used to produce many of these sculptures also indicates the importance of Offering #4. While one unusual figure in Offering #4 is made of now-rough, eroded granite, and the fragmentary figure (likely its companion, also standing with back to the celts—not shown) was badly decomposed schistose—both victims of La Venta’s highly acidic soils—the remaining 21 sculptures are made of greenstone, a material that Mesoamericans valued above all others. Greenstone includes all green and bluish-green stones, with the most highly coveted form being jadeite, the American form of jade. Thirteen of the figures are composed of greenish serpentine, while two figures and all six of the celts are jade.

The figures all take the typically Olmec style often referred to as the “baby-face,” with an elongated head and a face with a down-turned mouth, puffy almond-shaped eyes, a triangular nose with drilled nostrils, and long, narrow ears with drilled holes in the lobes. The figures also all have nearly flat, slender bodies and take the classic pose of standing baby-face figures, with slightly bent knees and legs apart in a V, and arms held stiffly out to each side, with slightly bent elbows. The six celts, meanwhile, are especially thin and narrow, clearly decorative objects rather than utilitarian axes or adzes.

Taken all together, the figures and celts of Offering #4 are similar in style, but their individualized features reveal that no single artist or workshop produced all of the sculptures; in other words, the Olmec did not create these sculptures as one group, expressly for this offering, but assembled this scene by repurposing and even recycling other small stone sculptures. While the figures all take the classic baby-face style, they vary in color and details. Their heights and proportions vary, as do specific facial features such as the mouths; some have open, empty mouths, while others display a bare gum ridge, and still others have detailed teeth. Several figures were also already worn and broken, with missing hands, arms, or feet, when this offering was assembled. Other figures show evidence of reworking; for example, while some have deeply carved and well-modeled chest features and loincloths, others have only rudimentary, incised chests and loincloths that contrast with the original fine carving of the figure. The drilled ear holes, open poses, and elongated heads also strongly suggest that the figures may once have worn ornaments, clothing, headdresses, or possibly even wigs—and their dress could have changed for different occasions. The six celts, meanwhile, may have assumed their final, thin forms for the scene portrayed in Offering #4, but four of the celts illustrate the remains of incised imagery on one side, revealing that they had previous incarnations as parts of other objects. Placing a mirror next to one celt shows that it once formed half of a jade object incised with the image of an Olmec supernatural; another celt illustrates incomplete geometric shapes. The last two incised celts reveal their secrets when placed side-by-side; together, they illustrate the image of a richly attired, prone man with his head facing forward—a well-known Olmec image called “the flying Olmec”—and show that the two celts were once part of a larger object.

The meaning of the scene portrayed in Offering #4 has long been a mystery, although most scholars concur that it represents some sort of important mythological or historic event. Some have speculated that the scene might portray a group of priests involved in an important ritual or procession to honor a visiting dignitary, or that perhaps it is a gathering to prepare a human sacrifice. Recent research has established that the row of celts forming the backdrop of the scene likely represent stelae—upright standing stones that are often covered in relief sculpture—and that the scene therefore takes place at an important site. Other studies have revealed that two of the figures–the second figure in the procession and one figure in the on-looking crowd—have chest and groin features suggesting that they are female.

The female in the procession is one of the two jade figures, and it is the most stylized figure of Offering #4, with an especially large head and a very light blue-green color. The other jade figure is the figure facing the procession—a larger, finely carved male figure of bright green jadeite that wears a prominent incised loincloth. If the jade material was particularly significant, these two figures might be interpreted as the main actors of the event, with the remaining figures of the procession perhaps acting as attendants, and the granite figure facing the crowd (and possibly the now-disintegrated schistose figure) acting as priest or important witness. If so, Offering #4 might represent a meeting of two dignitaries, the establishing of an important alliance, or, if the jade figure in the procession is in fact female, even the marriage of two people of high status—all types of scenes that also appear to be recorded in Olmec relief sculpture (see below). Line drawing by author of La Venta Stela 5. In this scene, two high-status male figures meet (1 and 3). The central figure (1) has his arm hooked around the arm of an elderly, high-status woman (2), possibly supporting her. What appears to be a pregnant, high-status female spirit or ancestor reaches down from the sky above and offers a celt to the group below (4).

Whatever the meaning behind Offering #4, the Olmec clearly assembled the objects into this scene as an important offering, since before the figures were placed into position, they were covered in red cinnabar and hematite pigment—a treatment reserved for high-status offerings and burials. The Olmec also completely buried the scene in specially cleaned, pure white sand immediately after they placed the figures and celts into position, then covered the mound of sand with clean fill, and finally constructed a large platform on top. Offering #4 and the event that it commemorates apparently lingered long in Olmec collective memory as well. According to the original excavation reports, about 100 years after the original deposit, a later generation dug a small, precisely oriented oval pit down through four layers of platform flooring, through the fill, and into the white sand of the deposit. However, they dug just down to the tops of the celts and the figurines’ heads, as if to check and verify that the scene was undisturbed—and then immediately reburied them once again. 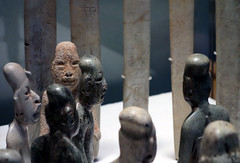 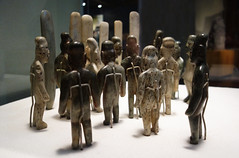 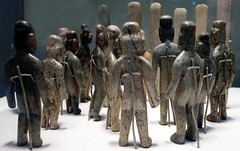