Francisco Pizarro and the conquest of Peru

In the early sixteenth century, the Inka Empire was in a state of turmoil due to a succession dispute between half-brothers Atahualpa and Huascar. They shared the same father, the penultimate Inka ruler Huayna Capac, who had died suddenly in 1527 without choosing an heir to the throne. Atahualpa, based in the northern Inka city of Quito, was in the process of consolidating the northern reaches of the empire in modern-day Ecuador and Colombia while Huascar commandeered Cuzco in the south. The half-brothers instigated a civil war that rocked the empire’s foundations to its core. Atahualpa and his powerful army ultimately managed to defeat Huascar and ascend to the throne.

It was at this very same time, however, that Spanish conquistador Francisco Pizarro arrived on South American soil. With news of white-skinned strangers arriving in the northern highland city of Cajamarca, Atahualpa traveled northward to greet the new arrivals in November of 1532. Atahualpa arrived in Cajamarca with a large retinue of attendants and soldiers. While the initial encounter between the Inka and the conquistador was an amicable one, tensions flared after the Spanish friar and translator Vicente de Valverde handed Atahualpa a breviary (liturgical book) to ascertain his receptiveness to Christianity, a religion about which the Inkas, of course, had no knowledge whatsoever. 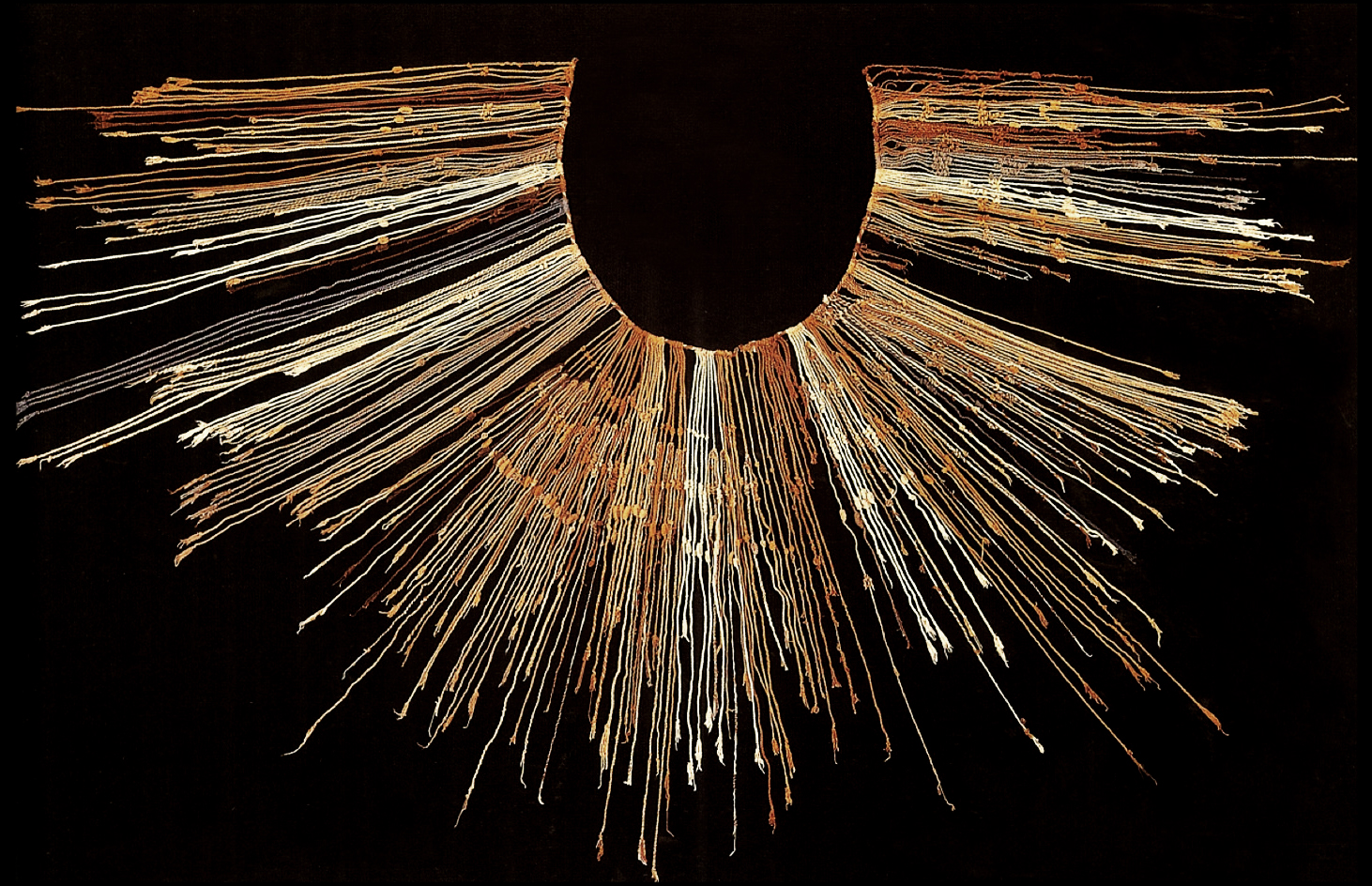 Since the quipu served as the primary system of communication in the Inka empire, Atahualpa had no concept of a “book” in the European sense of the term. According to the chroniclers of the Spanish conquest, Atahualpa threw the book to the ground. This perceived act of disrespect—of throwing the sacred book, and by extension, the word of God—to the ground provided the conquistadors with justification for ambushing the city and taking Atahualpa as their captive.

This pivotal moment in the Spanish conquest reveals the fundamental cross-cultural misunderstandings that took place during the early years of the Spanish invasion. While a number of translators facilitated dialogues between Spanish conquistadors and Quechua-speaking Inkas, their radically different world views and ways of life often defied simple linguistic translation. In his attempt to negotiate with Pizarro, Atahualpa promised to fill up a room measuring twenty-two feet long, seventeen feet wide, and eight feet high with gold and silver as ransom in exchange for his freedom. He agreed that the room would be filled entirely with gold, and then with silver twice over, all within the span of two months.  The indigenous chronicler Felipe Guaman Poma de Ayala (ca. 1535–after 1616) illustrated this scene in his El primer nueva corónica i buen gobierno (The First New Chronicle and Good Government), a 1,189-page manuscript written to King Philip III (1578–1621) in protest of Spanish colonial rule. Despite Atahualpa’s miraculous success in coordinating donations of precious metals, he was publicly garroted (strangled) in 1533 on trumped up charges of idolatry and for the murder of Huascar. Pizarro’s army invaded the Inka capital of Cuzco on November 15, 1533, thus solidifying the Spanish triumph over the Inka empire. In some ways, the Spanish victory was inevitable. Inka stone and wooden weaponry were no match for Spanish metal armor, swords, and harquebuses (a type of proto-musket).

Pizarro and his army also capitalized on the deep political fractures within the Inka empire caused by the succession battle and received ample support from Atahualpa’s detractors. Nevertheless, Inka resistance delayed the full consolidation of Spanish colonial rule in the Andes until the execution of Tupac Amaru, the last ruler of the Neo-Inka state, a semi-autonomous faction that ruled from 1535 until 1572 in the secluded tropical outpost of Vilcabamba.

The effects of the Spanish conquest

The Spanish conquest of the Inka Empire brought about fundamental changes to the Andean social, political, and cultural landscape. The dismantling of Tawantinsuyu (the Quechua term for the Inka Empire) resulted in the irrevocable loss of Inka self-governance and the implantation of Spanish colonial rule. Spaniards quickly established themselves throughout the newly conquered region, often in pre-Hispanic urban centers. The former subjects of the Inka empire were forcibly resettled into indigenous settlements known as reducciones, while Spaniards settled in cities throughout Andean South America inhabited primarily by Spanish and criollo (Latin American-born Spaniards) residents. High tribute quotas were imposed on indigenous peoples that required participation in laborious public works projects and the mining of precious metals on a rotational basis. Inka religion became the target of Spanish missionaries, who associated it with idolatry and devil-worship based on a profound misunderstanding of Inka religious practice. Spanish colonial rule, which lasted from 1534 into the 1820s exerted a profound and destructive impact on the lives of Peru’s indigenous inhabitants. However, the conquest and colonization of the Andes did not result in the complete eradication of indigenous peoples or indigenous practices. The visual arts of the colonial Andes stand as a testament to the resilience of native peoples in the post-conquest world. Native Andeans continued to express themselves artistically alongside and in collaboration with Spanish, mestizo, criollo, Asian, and African-descended peoples. Pre-Columbian artistic traditions cultivated over the course of several millennia entered into dynamic contact with imported European models to produce stunning and culturally complex works of art.

Establishment of the Viceroyalty of Peru and its artistic centers The Viceroyalty of Peru was established in 1542 and encompassed part or all of modern-day Venezuela, Panama, Colombia, Ecuador, Peru, Bolivia, Chile, Paraguay, Uruguay, and Argentina, and even some of Brazil, making it the largest viceroyalty in the Spanish Americas. By the eighteenth century, however, the Peruvian viceroyalty dramatically reduced in size with the establishment of the Viceroyalty of New Granada in 1717 and the Viceroyalty of Río de la Plata in 1776. At its height, the Viceroyalty of Peru was a burgeoning administrative district and hotbed of artistic activity. The coastal city of Lima, founded in 1535 by Pizarro, was assigned the capital of the viceroyalty for its accessibility and proximity to crucial trade routes—Cuzco’s high altitude and relative isolation was deemed an obstacle to Spanish political and economic interests. Artistic centers emerged throughout the viceroyalty’s major cities, including Lima, Cuzco, and Arequipa in present-day Peru, Quito in present-day Ecuador, and La Paz and Potosí in present-day Bolivia. The new artistic and architectural traditions that emerged under Spanish rule played a critical role in ensuring that the viceroyalty’s inhabitants were devout Catholics and loyal subjects of the Spanish crown.

At the same time that the visual arts reflected Spanish colonial interests, however, they also held the power to challenge and subvert them. The visual traditions borne out of colonialism are often layered with multiple registers of meaning that transmitted different messages depending on the cultural identity of the viewer. The arts of colonial Peru are neither fully pre-Columbian nor fully European, but a dynamic combination of both.

Peru: Kingdoms of the Sun and the Moon (Montreal: Montreal Museum of Fine Arts, 2012)

Cite this page as: Dr. Ananda Cohen-Aponte, "Introduction to the Viceroyalty of Peru," in Smarthistory, October 16, 2020, accessed June 25, 2022, https://smarthistory.org/viceroyalty-peru/.