The woman in white stands facing us, her long hair loose, framing her face. Her expression is blank, her surroundings indistinct; posed before some sort of pallid curtain, she appears almost as an immobile prop on a stage.

Symphony in White, No. 1: The White Girl epitomizes James Abbott McNeill Whistler’s departure from the established norms of the era, and was perhaps his most reviled work. When he submitted it to the 1863 Paris Salon, the jury rejected the painting and the artist instead showed The White Girl at Napoleon III’s exhibition of snubbed artwork, the Salon des Refusés. Though it certainly defied many time-honored artistic conventions and earned much derision from critics, The White Girl does show some echoes of older standards. After all, its creator had studied under Marc-Charles Gabriel Gleyre in Paris, learning to paint in the academic manner – thus it is unsurprising that in the representation of his mistress, Joanna Hiffernan, Whistler opts for the customary full-scale society portrait format, and reproduces her features in a seemingly realistic and honest fashion. 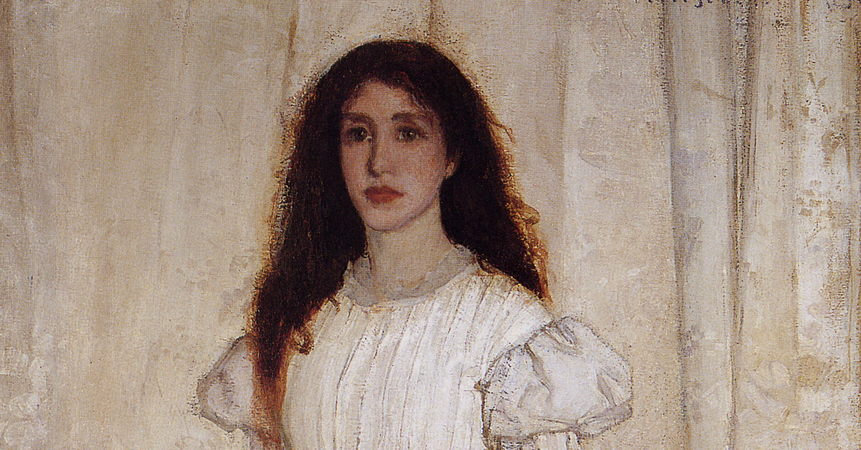 The ways in which Whistler follows his own rules, however, far outnumber the few examples of accord, and they include the painting’s flattened and abstracted forms, distorted perspective, limited color palette, and penchant for decorative patterning. Though an intimate portrait, The White Girl is contrived and reveals no overarching mood or the personality of its sitter. While many of Whistler’s stylistic innovations are unique to the artist, he associated himself with other artists – such as Édouard Manet and Gustave Courbet, who also defied the traditions of academicism. The influence of Théophile Gautier is also apparent; in the 1830s, Gautier stated that art need not contain any moral message or describe any narrative, as art making is an end in and of itself – Whistler accepted this credo, “art for art’s sake,” wholeheartedly. In this light, The White Girl is less a faithful portrait painting and more an experimentation in color, pattern, and texture. 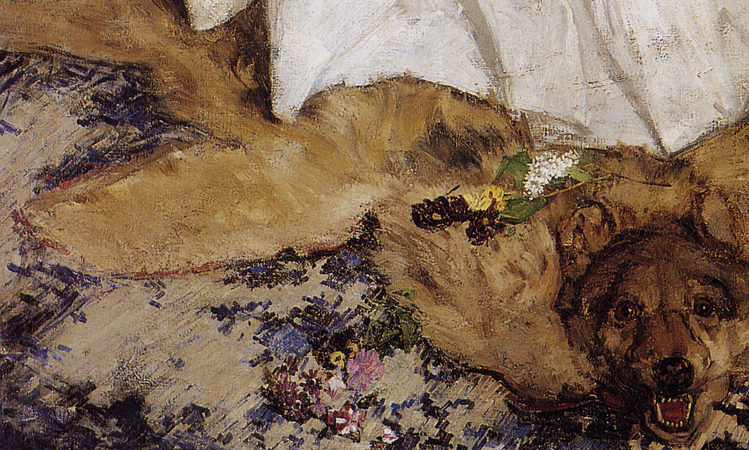 Whistler produced many portraits of similar format in the next decades, and continued to fine-tune his style and technique. In paintings such as Harmony in Gray and Green: Cecily Alexander (1872-74) and Arrangement in Flesh Color and Black: Portrait of Théodore Duret (1883), the artist exercised his need to balance the realist components of a picture with its more abstract needs, cherry-picking elements from the real world and reorganizing them in controlled, harmonious ways. Often these images feature a subdued palette, a lack of depth, unresolved backdrops, and irrational props that serve only as accents. His figures typically stand upon an unthinkably flat floor, appearing almost to hover like specters. As for Whistler’s signature, it evolved to take the form of a butterfly, applied to the surface in the manner of a mere decorative element.

Despite the controversy stirred when he entered the scene, Whistler won many wealthy and prestigious patrons over his career, and his portraits stand as testaments to growing interest in the radical new avant-garde approach to painting.

Sound Cloud on this painting