At the breath-taking elevation of 11,200 feet (roughly 3,400 m), the city of Cusco was not just the capital of Tawantinsuyu (“Land of the Four Quarters,” the Inka name for their empire in their native language, Quechua). It was an axis mundi—the center of existence—and a reflection of Inka power. The city was divided into two sections, hanan (upper or high) and hurin (lower), which paralleled the social organization of Inka society into upper and lower moieties (social divisions). Cusco was further divided into quarters that reflected the four divisions of the empire, and people from those sections inhabited their respective quarters of the city. In this way, the city was a map in miniature of the entire Inka empire, and a way for the Inka rulers to explicitly display their power to shape and order that empire.  Some scholars think that the city was deliberately laid out so that it was shaped like a puma, symbol of Inka might, but this is still under debate. The masonry of Cusco displays an understanding of stones as being like people, in that many different ones may fit together if they are properly organized. Each individual stone was pecked with tools and fitted to the one next to it, with the result that blocks will have a varied number of sides, such as the famous Twelve-Sided stone in the walls of Hatun Rumiyoq Street. Some sides of each stone were made to curve outward slightly, others to be slightly concave, so that the stones slotted together, while still allowing a small amount of movement. The ability to move a little was important in an area that is seismically active, protecting the walls from earthquakes.

The city hummed with activity, both secular and religious. Not only the Inka rulers and their nobles resided in Cusco. Local leaders from all sections of the empire also lived in Cusco—often compelled to do so as a means of controlling their home populations. Girls and young women were drawn from across the empire to the capital to serve as cloistered acllas (“chosen women”): to weave fine cloth for gods and nobles and to make corn beer (chicha) for religious rituals, to serve gods in shrines, and in some cases to be given to Inka favorites in marriage. Young men were also brought to Cusco to be educated and raised in the Inka culture. When they returned to their homes, they would be valuable advocates for Inka traditions and power. In addition to the Inka gods and ancestor mummies kept in the capital, there were also the captured gods of subject peoples, brought there as another means of controlling their followers. At the heart of hurin Cusco was the Qorikancha (“Golden House”), the most sacred shrine of the Inka, dedicated to the worship of the sun. While the Inka had many gods, they claimed descent from the sun, whom they called Inti, and held the sun’s worship above all others. The Qorikancha was the center point of the empire, and from it radiated imaginary lines, called ceques, which connected it to shrines throughout the Cusco valley. Rebecca Stone refers to the ceques as a “landscape calendar and cosmogram,” as the shrines were also a marker of time, with different noble families tending to and holding rituals at the shrines around the ceque system throughout the year.

After the conquest, the Qorikancha was one of many Inka shrines turned into a Christian holy space. The monastery and church of Santo Domingo were built around and on top of the original shrine, incorporating the old structure into the new one in a way that makes for a strange appearance today. Parts of the old temple are still visible, inside and out, alternating with Spanish Baroque architectural features (see image above).

The Qorikancha itself was renovated by the first emperor, Pachacuti Inka Yupanqui, after he had a mystical revelation that declared him a divine king. All of the doorways, windows, and wall niches of the Qorikancha were the distinctive Inka trapezoid shape, with doorways double-jambed (see image below) to signify the importance of the building. 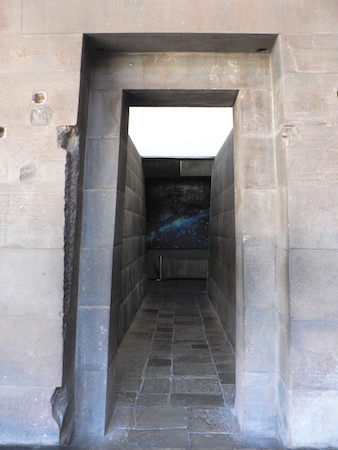 The exceptionally fine masonry of the Qorikancha was reserved for the most important buildings, since it was even more time-consuming than regular Inka stonework.

Rather than fitting each stone together as an individual shape, creating an irregular-looking surface, here they were shaped into even courses of rectangular blocks, and polished to a smooth finish. The walls were then covered in sheets of gold to signify the shrine’s dedication to Inti, and would have reflected the sun’s rays with a blinding brilliance. But the spectacular, radiant exterior was not the apex of the building’s wonders. Inside, a reproduction of the world in miniature took the shape of a garden made from gold, silver and jewels, with people, animals, and plants. The riches of the Qorikancha would be taken in the looting of the city following the Spanish conquest in 1532, and melted down for their precious materials. 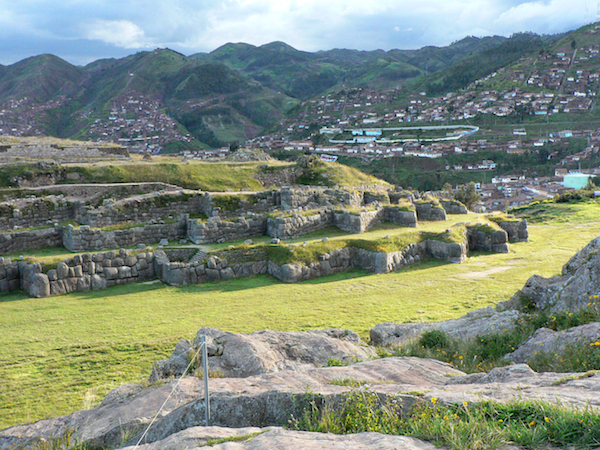 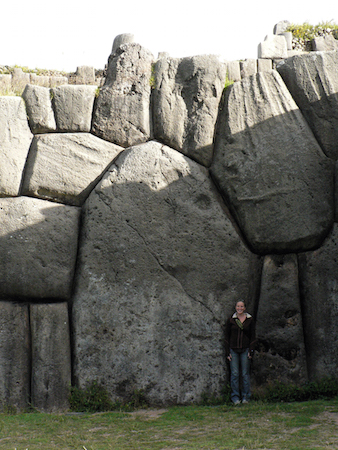 Saqsa Wayman looks down on the city of Cusco from the northwest. The structure, with its zig-zagging walls, is described as a fortress, although there are still many questions as to how it functioned in that capacity, and the purpose of some of its features is debated. It is possible that it was never finished, or that parts of it were left incomplete at the time of conquest, as Jean-Pierre Protzen has proposed. The stones used to construct it were much larger than those used in the streets and houses of Cusco, as can be seen in the photo at left. The stones were quarried and hauled into place using considerable manpower, obtained through the mit’a, or labor tax, that all able-bodied people of the empire owed the Inka.

Video from Unesco on the City of Cusco

City of Cusco from Unesco

Rebecca Stone, Art of the Andes: From Chavín to Inca (New York: Thames and Hudson, 2012).

Rebecca Stone-Miller, Art of the Andes: From Chavín to Inca (New York: Thames and Hudson, 2012).