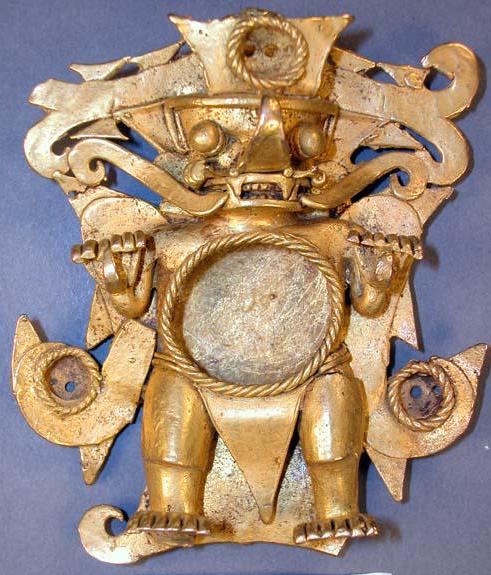 Although the entertainment industry is constantly releasing a new Hollywood blockbuster, TV series, video game, graphic novel, or comic book about Batman’s latest adventures, it is important to understand that the extraordinary image of a human being with bat features and qualities existed long ago in the Americas. This is one of the key messages from this unique pendant from ancient Panama. 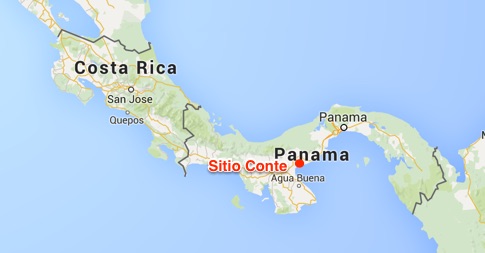 Archaeologists found this pendant with the remains of a male elder in a grave at the cemetery called Sitio Conte, located west of Panama City in the province of Coclé and approximately twenty-five miles from the Pacific Ocean. The Sitio Conte cemetery was one of several major regional cemeteries in the first millennium C.E. Currently, archaeologists are excavating El Caño, another major cemetery very close to Sitio Conte with similar types of graves and art objects. At least 200 people, mostly adult men, were buried at the Sitio Conte cemetery between 750 and 950 C.E.

Besides this pendant, the male elder’s grave was filled with pottery and tools as well as many types of jewelry and ornaments in various materials, including metals, animal bone, and stone. The Bat-Human pendant was found near two other pendants that look completely different—one displays two male warriors (below) and the other one mixes bat and crocodile imagery. Aside from this older man and his items, fourteen men of various ages were interred alongside him in the grave and most of them also had some pottery, tools, jewelry, or ornaments. 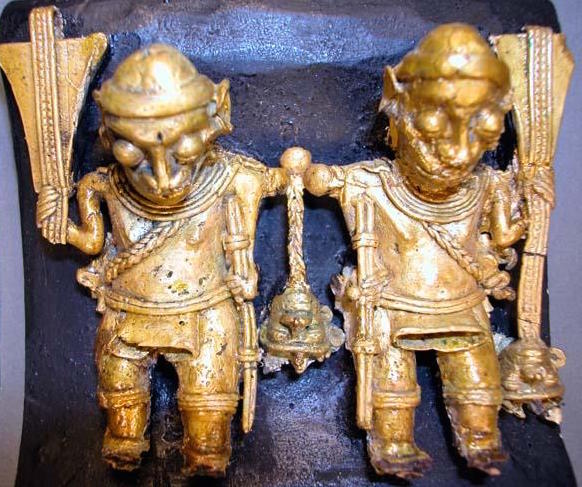 The bat-human pendant is in very good condition overall. One loss can be observed at the right bottom corner and another one can be seen at the left top corner. It is made with a gold-copper alloy (typical of ancient Central American metalwork), and showcases the artists’ skills with a variety of materials and techniques. It was fabricated using the lost-wax method, which requires many steps before the pendant is cast by pouring liquid metal into a mold.

In addition to casting, the curved wings with pointed extensions were made from sheets hammered into shape and attached to the body at the shoulders. Along with casting and hammering, the artists also inlaid materials into the four round and now empty depressions. The inlays have not survived after being buried for centuries in water-logged soil (the cemetery was located along the Great Coclé River). However, archaeologists have observed traces of resin in the large central depression, indicating that some sort of stone was held in place through this method. The other three depressions were inlaid differently, which is indicated by pairs of holes in the metal back.

Such holes would have had a cord pass through the back, holding the stone in place. It is likely that the smaller depressions would have once held pyrite or emeralds. Emeralds were a highly valued material and were used across Mesoamerica and Central America. In fact, a pendant in another Sitio Conte grave has a large square emerald in its back and, as such, bears witness from ancient Panama to the value of greenstone across Mesoamerica and Central America. 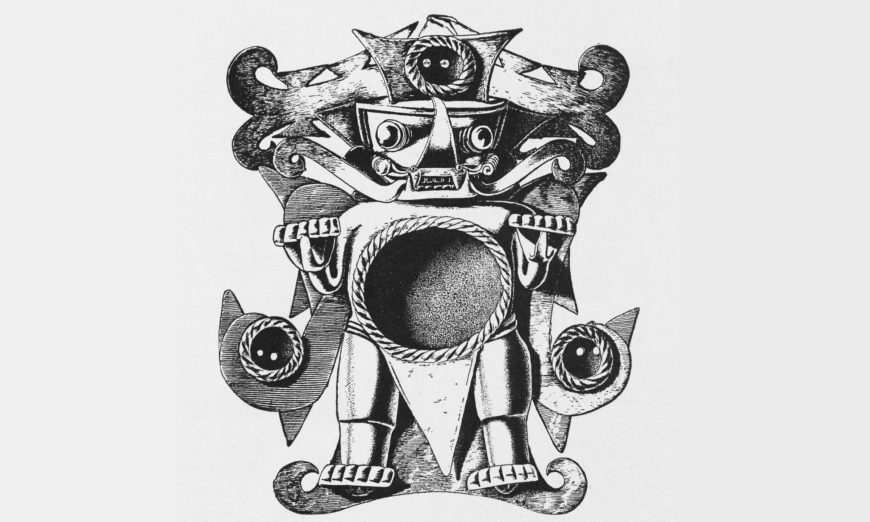 On the back of the pendant are two suspension rings, which confirm that this object was designed to be hung on a cord around the neck, either alone, or, more likely, with other pendants such as those found in the grave. There is evidence dating from the time of Spanish Conquest in the 16th century that people living on the Caribbean coast of Panama wore mirrors suspended from their necks.

In addition to the mixture of techniques and materials, this pendant’s imagery also is a blend: human being and bat. Today there are more than one hundred known bat species in Panama. Several features of the pendant resemble bats such as its large ears, interlocking canines, and partially folded wings with pointed contours. The triangular or leaf-like nose panel resembles that of the leaf-nosed bats (family Phyllostomidae). Bats—especially with the wings spread open—are a popular subject for Sitio Conte pottery and pendants. However, this figure stands straight on two legs with two arms and hands raised like that of a human. All of its fingers are separated from the wings—unlike actual bats whose free thumb and fingers are encased in its wings. The figure has a trapezoidal forehead contour and upper and lower sets of square teeth behind canines. These features resemble human-shaped pottery vessels found in Sitio Conte graves. The figure is dressed in a loincloth, which is articulated by contour lines that run across the knees and a triangular cloth tucked between the legs. The Bat-Human figure also wears an elaborate head ornament in the shape of a trapezoidal panel.

It is not hard to understand why humans create images of themselves possessing the bat’s striking physical features and impressive abilities, such as adroit flight and locating prey at night.

Bat-human imagery in ancient Central American art is often linked to religious beliefs and practices. There is evidence of ritual specialists in ancient Central American societies: men and women who go through rigorous training about the natural and supernatural worlds to gain knowledge that helped them accomplish a goal for the community. The specialists may have animal assistants and they may also transform into these assistants during rituals to acquire the animal’s features and abilities. Beliefs and practices of ritual specialists may also help us understand the pyrite originally in the central depression (and possibly the three smaller ones:) ritual specialists used mirrors like doorways opening into the supernatural realm. Mirrors let them see parts of the universe invisible to the ordinary eye.

Together, these observations may even lead to the hypothesis that the man buried with it served as a ritual specialist in his community in central Panama. Unfortunately, there is no way to confirm his identity or role in his society. That said, other tools in his immediate vicinity in the grave can be linked to ritual: he had two pyrite mirrors (only their stone backs survive today) and a pair of painted ceramic incense burners. Whatever the man’s exact identity in his community, today we can see very clearly a man outfitted for his afterlife with many powerful ornaments, tools, and images.
River of Gold: Precolumbian Treasures from Sitio Conte, University of Pennsylvania Museum of Archaeology and Anthropology (Penn Museum)
Additional resources:

Mirror Pendant in the form of a Bat-Human at the Peabody Museum of Archaeology and Ethnology, Harvard University (31-36-20/C13361)

Megan Gambino, The Call of the Panama Bats, Smithsonian Magazine, 2009

Olga Linares, “Ecology and the Arts in Ancient Panama: On the Development of Social Rank and Symbolism in the Central Provinces,” Studies in Pre-Columbian Art and Archaeology, number seventeen (Dumbarton Oaks Research Library and Collection, Washington, DC., 1977).