Imagine writing a history. More than likely, you would begin by brainstorming the events you would want to include, the characters in your story, and when and where the events took place. Then, you would have to order these elements in some way to create a cohesive account, maybe telling your story in a clear chronological order or from multiple perspectives. You would want to organize it using a format that packs in as much information as possible and serves the agenda of your narrative.

Although history writers throughout time have had to grapple with such questions, many use alphabetic text to record the past. However, for the Aztecs, the people who lived in Central Mexico before the arrival of the Spaniards in 1519, language took a painted form. The Aztecs understood writing and painting to be deeply intertwined processes, so much so that the Nahuatl word for “painter,” or tlacuilo, translates to “painter-scribe” or “painter-writer.” An important subset of the corpus of Aztec painted manuscripts, which include divinatory books, censuses, land registers, and tax and tribute documents, were histories.

The Aztec painted language operated at two levels. First, painter-scribes identified individuals and specific places through glyphs, which functioned like nametags. For instance, in the Codex Mendoza, the glyph attached to the ruler Acamapichtli provides the reader with his name, represented by a hand grasping a bundle of reeds (his name means “Handful of reeds” in Nahuatl). On the same page, a painted tree with a curled scroll represents a place called Cuauhnahuac. In Aztec painted writing, the representation of the ruler Acamapichtli itself carries meaning just like its associated name glyph. Acamapichtli’s visual features are elements of Aztec pictography, in which visual representations of people, places, and events act like writing. For instance, a literate reader can examine the representation of Acamapichtli (ignoring the name glyph) and conclude that he is a ruler since he wears the turquoise diadem of Aztec rulers, sits on the woven throne of rulers, and speaks (signified by a curled scroll that comes out of his mouth), an act characteristic of rulers (who were called huey tlatoani  or “chief speaker”).

Then, painter-scribes made strategic choices about to how to arrange and present these individual elements in order to create story arcs. This is the second way that the Aztec painted language operated. Some stories packed many people and events together in a stream of narrative, some stories stressed change over time, and in some stories, place and setting played a pivotal role to the narrative. The Aztecs’ painted language employed composition as a communication device as much as it used glyphs to identify people and places. 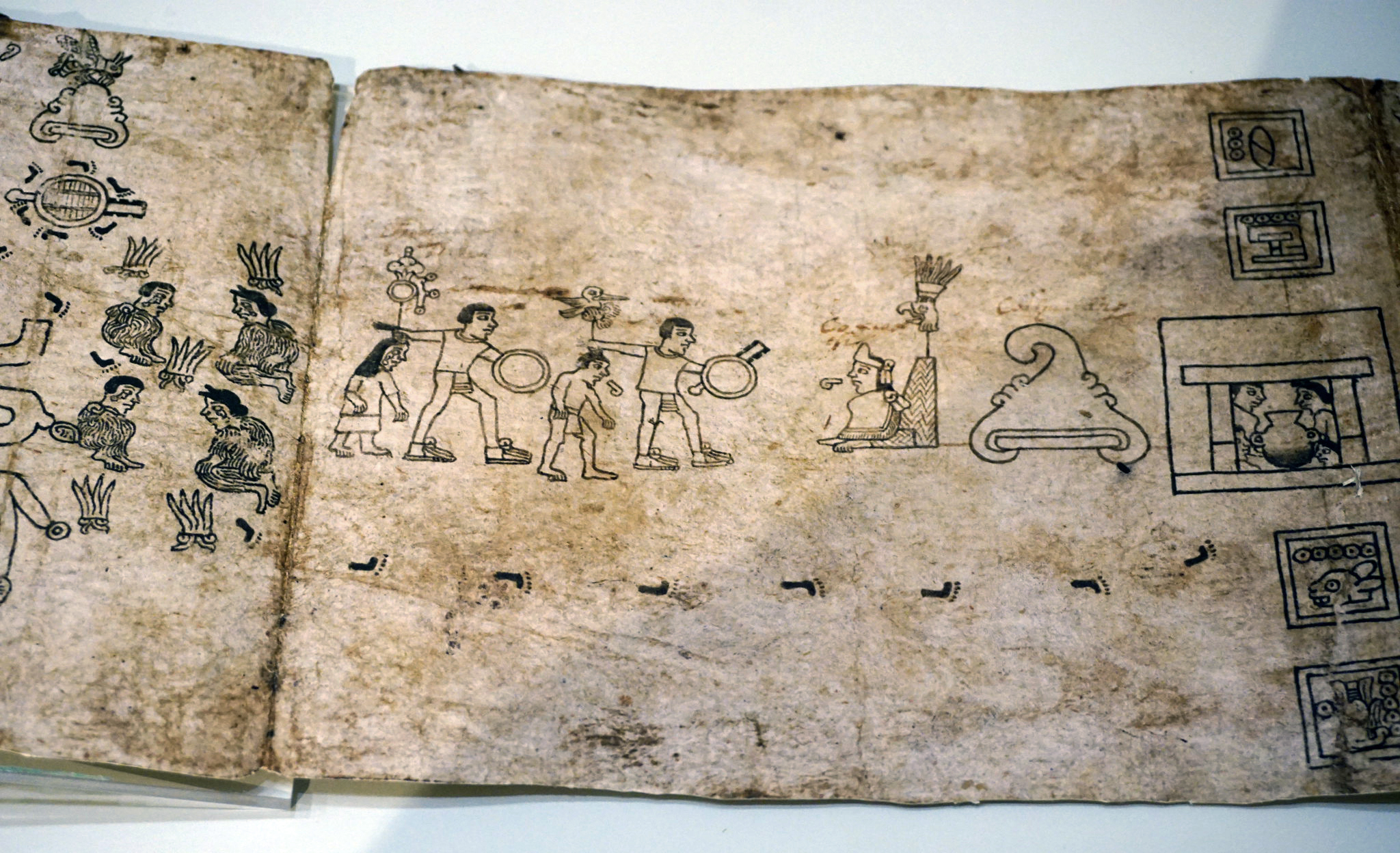 One painted history is the Codex Boturini. The codex is a screenfold, or an accordion-style book made of indigenous paper that allows the pages to be compressed or expanded at the reader’s discretion. This is the conventional format of pre-Hispanic painted books in Central Mexico. The first page of the codex represents the initial scene of the Aztec migration story, the foundation story that visually outlines the Aztecs’ journey from their ancestral homeland called Aztlan to their arrival at the eventual capital of their empire, Tenochtitlan (today, Mexico City). In the first page, a figure standing in a canoe departs from an island in the middle of a lake; the painter-scribe demonstrates that this place is an island through the wavy outline of the lakeshores. This island is Aztlan, the ancient homeland of the Aztecs; a male and female couple and a few temples symbolize that this place was settled and populated. The direction of the figures’ profile bodies and the footprints leading to the right cue the reading order. The footprint path leads to a large sign with a curled top, which represents a place called Colhuacan. Within this place, the Aztec patron deity, Huitzilopochtli, rests. He is identified by a head that seems to emerge from a bird headdress. Above the footprints is a framed flint sign with a single dot next to it. This is the glyphic year sign of 1 Flint and connects the action to a specific year. A series of curled scrolls emanate from the representation of Huitzilopochtli; these scrolls represent speech or utterance and show that the patron deity is speaking and giving direction to the migrants. Thus, in the eyes of a literate viewer, all of these pictorial elements come together to express that in the year 1 Flint, the Aztecs left their ancestral island home of Aztlan, and received directions from their patron deity to continue on their migration. The painter-scribes efficiently pack all of the required elements of narrative (people, places, events, and time) into this opening page using exclusively visual language. Throughout the rest of the codex, the Aztec migration story continues. Most of the pages include images of migrants, a place glyph that represents where they stopped on their migration story, and a cluster of year signs that show how many years they stayed in that particular place. Footprints link the migrants’ journey and symbolically connect the separate pages to one another (which could be expanded when opened from the accordion-style book). In the Codex Boturini, the painter-scribe emphasized the sequence and duration of the migration, as the narrative is linked together in a chronological order.

The flexibility of the Aztecs’ visual grammar meant that the migration story told in the Codex Boturini could also be told in a completely different format. In the Mapa Sigüenza, the Aztec migration story is told with the help of a conceptual map. While the Boturini is a screenfold book, meaning each episode of narrative corresponds to one page to be read sequentially, the story on the Mapa Sigüenza was painted on a single large sheet of indigenous amatl paper so the viewer sees all of the content at once. For the painter-scribe of the Sigüenza, it was more important to position the Aztecs’ migration in geography rather than as a sequence of events, as in the Boturini. The story begins in the top right corner, at the island of Aztlan (represented as a square filled with blue wavy lines representing water) and the curved place sign seen in the Codex Boturini. Tall, slender figures line up in profile to begin the migration. Their itinerary takes place along a thin pathway dotted with footprints to mark movement. The pathway meanders throughout the page, passing through signs that represent different mythic places. Dots next to these place signs express how many years the migrants stayed in each place. The disproportionately large place sign of a grasshopper on top of a green hill in the middle of the left side of the page demonstrates that this was the most important stop in the Sigüenza’s version of the migration. The painter-scribe chose to increase its size relative to the other place signs (what we call hierarchy of scale). Below this place, the painter-scribe adds descriptive geographic features, such as blue straight lines that signify canals and marshy vegetation, to help the reader identify this landscape as the marshy lakeshores that surrounded the ultimate capital of Tenochtitlan. Unlike the Boturini, the Sigüenza’s makers decided to use a map-like format to give its readers a better understanding of the spatial relationship between places on the journey.

Aztec books and the Spaniards

Although many Aztec painted histories survive today, none are undoubtedly pre-Hispanic in date. When the Franciscan friars arrived in 1524, they began to systematically destroy all types of books in Aztec libraries, as these forms of knowledge were considered to be continuations of pagan idolatry incompatible with Catholicism.

Despite this, indigenous painter-scribes continued to record histories in painted form in the decades after the Aztec-Spanish encounter, and even used the Aztec painted language to memorialize scenes of colonial history. In fact, the manuscripts described above (the Codices Boturini and Mendoza and the Mapa Sigüenza) were all created in the early colonial era. Indigenous communities made many manuscripts and maps in the pre-Hispanic style and used the painted language, often to express their ancient right to lands. Although viewership changed, the Aztecs’ painted language was both stable and versatile in the face of colonialism; it did not cease with Spanish intervention, but rather it adapted and addressed new audiences.

Facsimiles of colonial codices and commentaries (in Spanish) at Amoxcalli