Mesoamericans made screenfold manuscripts of great artistic beauty. One of them is the Codex Borgia, an Aztec manuscript made during the late Post-Classic period, which stretched from about 1250 until about 1521. It has been studied for centuries, and scholars continue to study this complex manuscript in order to better understand its original meaning and use.

While manuscripts were both ubiquitous and esteemed in Mesoamerica, only twelve survived the destruction related to the conquest of the Aztecs by Spain, when most were burned or otherwise destroyed. Each of the surviving manuscripts bears the name of its European owner or the institution where it was or is now kept. For example, the Codex Borgia is named after its former owner, Cardinal Stefano Borgia, an avid collector of coins and manuscripts.

Based on geographic origin and style, scholars classify the 12 pre-conquest manuscripts into three groups: 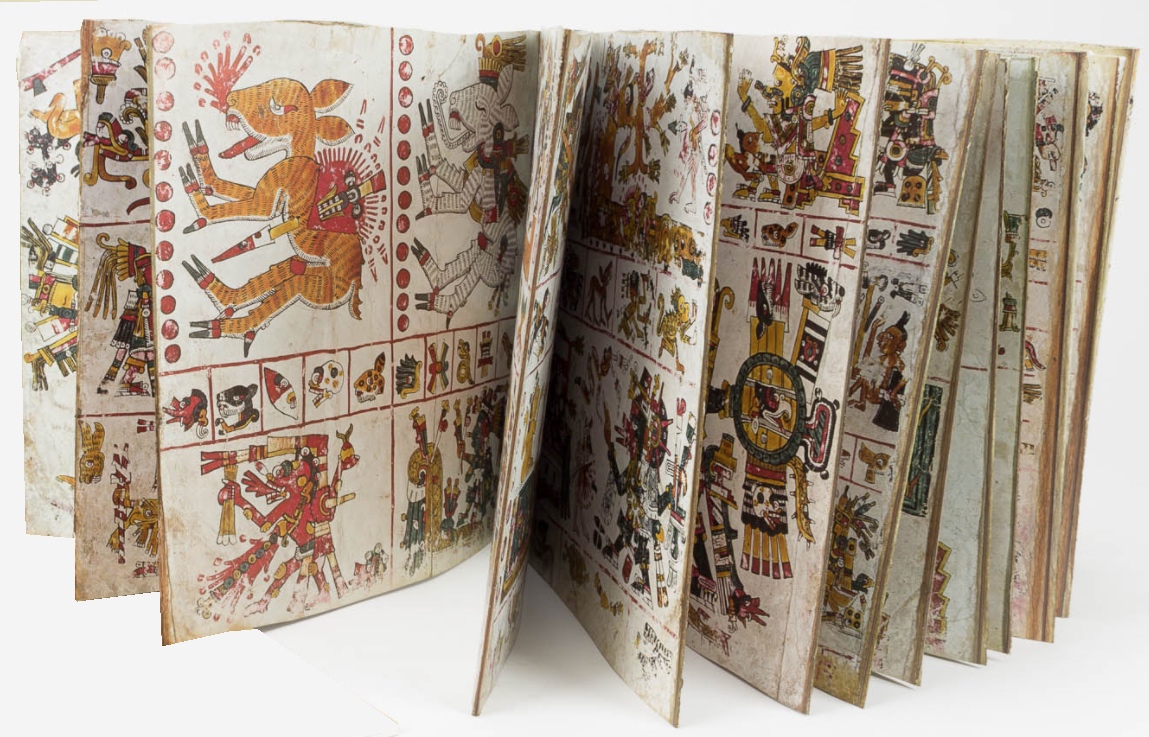 Manufacturing screenfolds involved gluing long strips of leather or paper. These measured different widths, but were of approximately the same height to form an even longer strip that was folded back and forth, accordion-like, to make “pages.” Scholars call the screenfold’s front “obverse” and its back “reverse.” Two pages, a large section, or even an entire side—obverse or reverse—can be viewed simultaneously. The screenfold is a Mesoamerican construction, strikingly different from European manuscripts whose pages are bound on the left side so the reader sees two pages at a time. Artists covered the screenfold’s obverse and reverse with white gesso to prepare it for painting.

When completely unfolded, the Codex Borgia measures approximately 1,030 centimeters (more than 33 feet) in width. When folded, its nearly square pages, each measuring approximately 26.5 by 27 centimeters, can be individually appreciated. The screenfold consists of 39 double-sided pages or 78 single pages, though only 76 of these are painted. The two outermost pages served as covers to which wooden panels were attached (only the Codex Vaticanus B retains these panels). The Codex Borgia features images with precise contour lines and painted with polychrome washes. In its dense imagery, human figures (usually representing gods) predominate, although plants, trees, animals, water, architectural features, celestial bodies, shields, and tools and accoutrements also appear. These are sketched with fine black lines, which in most instances are delicate and precise, such as the outline of the bird’s beak on folio (page) 23. Other outlines are rendered with somewhat thicker strokes, as is visible in the human figure’s legs and the feathers on the bird’s outstretched wings. Sometimes lines are executed as if to evoke shading, such as the narrow blue band at the base of the figure’s headdress. In the bird’s claw, diagonal lines coming from opposite directions simulate texture. 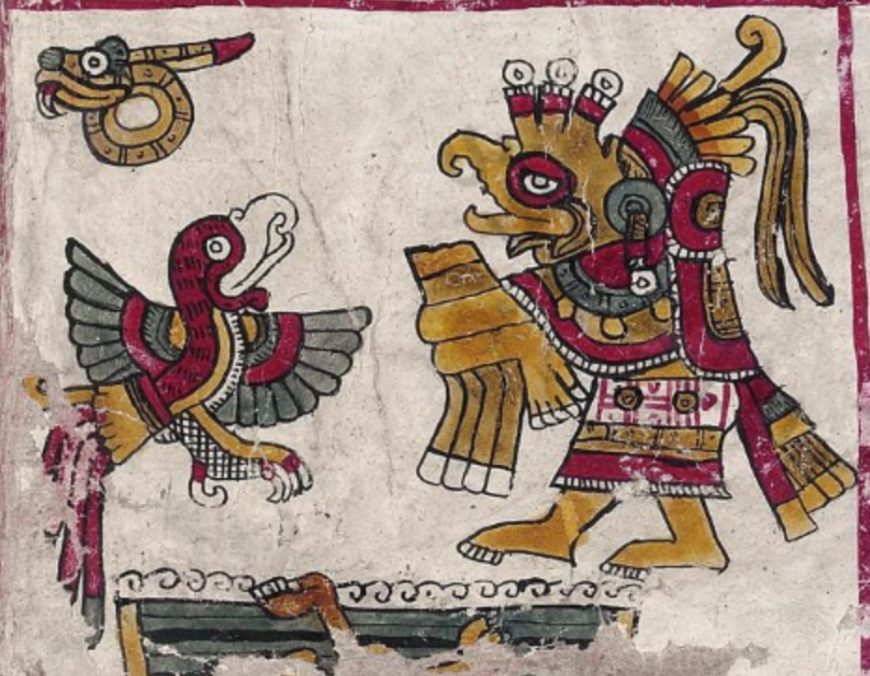 Pre-conquest manuscripts like the Codex Borgia help us to understand indigenous thought before the arrival of Europeans and Africans; however, the writing is extraordinarily difficult to decipher as it consists entirely of images and glyphs (characters or symbols). For example, page 28 features five compartments—one in each corner and one in the center—each with a male hovering above a female. 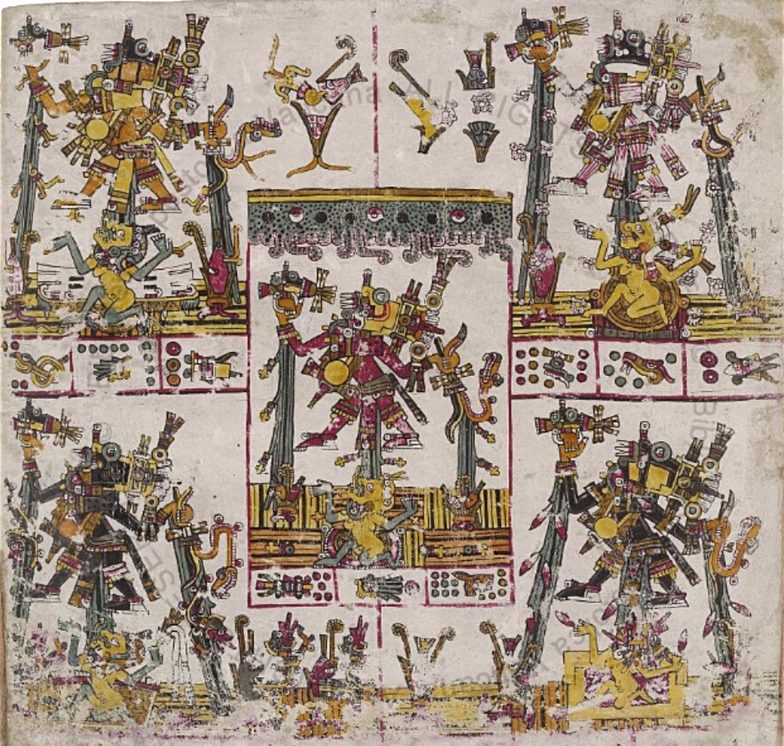 Glyphs for the days and year, Tlaloc (god) wearing the costume elements of Xiuhtlecuhtli (Fire Lord) and a goddess wearing the headdress of Chalchitlucue, Codex Borgia, c. 1500, p. 28 (Vatican Library)

Each female wears an elaborate headdress but is otherwise naked. The male-female couple appears amid maize, an important Mesoamerican plant. Below each compartment are three rectangles each containing a glyph. How do we decipher these images and glyphs? In the early colonial period, indigenous scribes, friars, conquistadors, and other Spanish officials compiled documents—what we call the ethnohistoric record—including chronicles and manuscripts with illustrations by indigenous artists that featured imagery with explanatory glosses in Spanish, Nahuatl (the language of the Mexica, or Aztecs), Latin, and/or Italian. These help us to understand writing in pre-Columbian manuscripts.

For example, page 28 of the Codex Borgia depicts Tlaloc, the god of rain whose iconography includes goggle eyes and fangs. Tlaloc wears costume elements and paraphernalia of additional creator gods, which, starting in the lower right and following a counter clockwise direction, are: Tezcatlipoca (Smoking Mirror), Tlahuizcalpantecuhtli (Lord of Dawn), Xiuhtlecuhtli (Fire Lord), Quetzalcoatl (Wind God), and Xochipilli (Flower Prince). The ethnohistoric sources also help us to identify the female figures and glyphs. The females wear the headdress of Ehecatl-Quetzalcoatl, the wind god (lower right), Xochiquetzal, the Flower Quetzal (upper right), and Chalchitlucue, the water goddess (the other compartments). The glyphs are day signs recording dates. In each compartment two glyphs represent days and one represents a year (page 28 records five consecutive years)

It is generally believed that the glyphs record the movements of the planet Venus and other celestial bodies, which would link the iconography of page 28 to astronomy and rainfall patterns. Because some of the glyphs are severely worn, there is some disagreement about exactly what they represent. Overall, the page’s iconography relates to maize, creating what some would call an “agricultural almanac.” 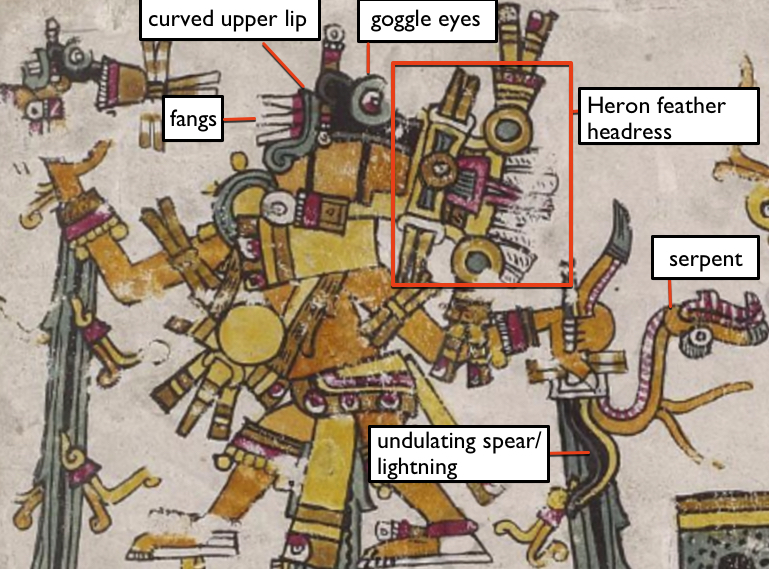 The Codex Borgia’s scholarship is extensive and includes discussions of its materials, construction, style, origin, and interpretation (of specific figures, pages, or sections). In the 1790s, the Jesuit José Lino Fábrega wrote a pioneering commentary arguing that the manuscript relays messages about divination (predicting the future). Eduard Seler’s 1904 page-by-page iconographic analysis of the Codex Borgia, which continues to be an essential tool in the study of Mesoamerican manuscripts, contends that the Codex Borgia conveys messages about both divination and astronomy. Subsequent scholars have shown that the Codex Borgia also records historical, ritual, mythological, and most recently, botanical information. For example, I have argued with iconographic, ethnographic, and scientific evidence that page 28 represents pollination. Because so few original codices survive, the continued study of the Codex Borgia is essential for our understanding of the pre-conquest cultures of the Americas.

This manuscript at the Vatican library

Elizabeth Hill Boone, Cycles of Time and Meaning in the Mexican Books of Fate (Austin, TX: University of Texas Press, 2007).