This essay examines the late Pre-classic period, especially its basic characteristics. The late Pre-classic runs from 400 B.C.E. to 150 C.E.. It is bracketed on one side by the dissolution of the Olmec culture, and on the other by the rise of Teotihuacan as the Mesoamerican mega city. 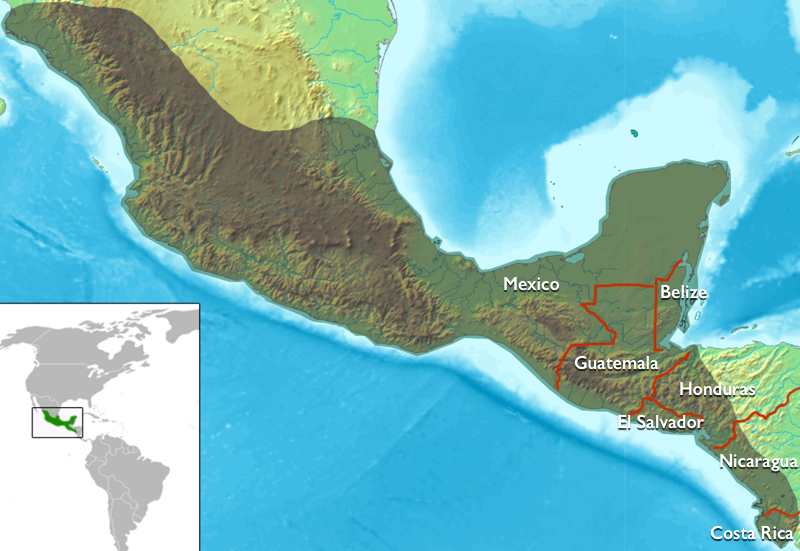 Map of Mesoamerica, with the borders of modern countries

It is important to remember that no one woke up on January 1st, 400 B.C.E. and said, “We are no longer Olmec.” The dissolution of that culture was not so abrupt, and elements of it were mixed into later cultures throughout Mesoamerica. In fact, the Olmec legacy is a large question in Mesoamerican art history. Just how important were the Olmec and in what way?

I want to stress that these period dates are not real. They are simply helpful. Because it is the case that the years between 400 B.C.E. and 150 C.E. saw the creation of numerous capital cities outside of the old Olmec heartland, while there was an explosion of regional art styles at the same time, as groups took on the idea of urban civilization but gave it their own twist.

This explosion of regional art styles may be seen most fully, however, in the precious elite objects in jade and other fine materials that were circulating throughout Mesoamerica by this time. For the remainder of this essay, I want to go over some important characteristics of two of these new regional capitals, Izapa on the Pacific Coast and Monte Alban in the modern Mexican state of Oaxaca. I am not proposing these two capitals were more important than others. There were several important urban civilizations that were developed during the late Pre-classic away from the Gulf Coast. They do, however, serve as useful examples of the trends developing at this time.

Let’s start with Izapa, which is located on a hot, humid part of the Pacific Coast. We often associate the Gulf Coast with heat and humidity and the Pacific Coast with a little bit more temperate climate, and certainly drier, but this is not the case at the very southern edge of Mexico on the Pacific Coast, where we find the site of Izapa. It’s as hot and humid as anywhere in the tropics.

It’s a great place to grow cacao, which is exactly what the Izapans were doing, almost certainly by the late Pre-classic. Cacao, or chocolate as it’s known in English, is and was the most valuable crop in this area. In fact, for ancient Mesoamerican elites, the value of chocolate is hard to overstate. Much later, or almost 2,000 years later when the Spanish arrived, cacao was the exclusive province of upper levels of society. The ability to drink chocolate, the ability to buy chocolate and then have it made into what we would call hot chocolate, was an elite prerogative. It’s one of the things that made you elite. Almost certainly, this goes all the way back to the late Pre-classic in the development of the regional elites during this time. Izapa was one of the places where cacao could be grown at a scale that Mesoamerica needed by this time.

Each of the green structures protects Izapan stone sculptures, including stele, Pre-classic period There’s another really important characteristic found at Izapa, but this one doesn’t have to do with food. It has to do with the art. Izapan art, unlike all of these regional capitals, had a number of monumental art objects placed in the center of their city. In fact dozens of stelae, or large dressed stones that then were carved in relief with a scene of what we think is part of the story that becomes the Popol Vuh. We have a particular kind of art format, which is the monumental stone stelae—dressed and flattened and given a planar surface on which to make a relief that tells a story. 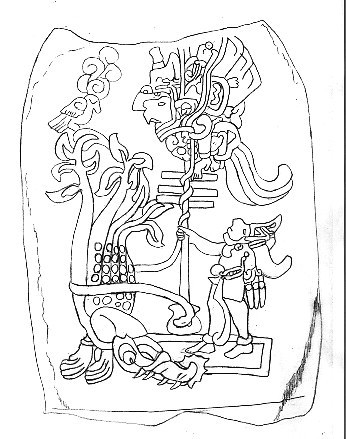 This kind of art making is called narrative art, or story-making art. It’s the first time that we see narrative art in such an elaborate way, worked out over the course of many stelae at the site. It is fairly clear that the iconographers who have worked on these stelae are agreed that some of the scenes seem to be proto-versions (very early versions) of scenes in the story of the Popol Vuh that we will find much later on.

Izapa was important: it introduces narrative art. It is one of the early cultivators of cacao and distributors of chocolate for the elite and in the late Pre-classic. It was a central place, an important player, in the Mesoamerican political and artistic landscape.

Monte Alban is a special, impressive place because it’s on top of a mountain that has been flattened. The peak of it has been cut off and then developed into a monumental center for art and architecture. This started in 400 B.C.E. or a little before, and gives you a sense of just how much power and work these leaders could call upon as they were building their early Mesoamerican cities. Stela 6 with typical Zapotec writing that begins on the upper left. It says something like “In the Year 10 Deer a man named 2S was captured.” Monte Alban, Pre-classic period (photo: HJPD, CC BY 3.0)

In addition to just flattening the place and creating a huge plaza that then served as the foundation for the monumental art and architecture, we also see very early writing, and lots of it, by the late Pre-classic period at Monte Alban. Stele with writing are not always in the same place that they were during the late Pre-classic. Monte Alban was continuously inhabited, and they had the tendency, which is somewhat frustrating to archaeologists, of moving their monuments around quite a bit over the course of Monte Alban’s history. Nevertheless we can date with some confidence many of the stones that have hieroglyphic writing to the late Pre-classic period.

A time of flowering regional cultures

To sum up, the late Pre-classic is a really interesting time of the flowering of regional cultures. By the late Pre-classic period we see this urban civilization pattern exploding almost everywhere in Mesoamerica, and it will of course then come to a certain kind of fruition in the megalopolis of Teotihuacan in 150 C.E., and that’s when we see the late Pre-classic ending and a new era beginning—what we call “the Classic Period.” 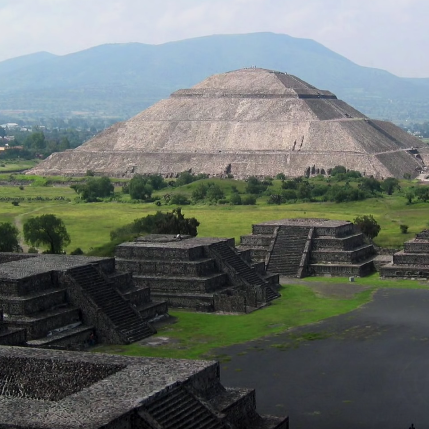