Around 1541, the first viceroy of the viceroyalty of New Spain, Antonio de Mendoza, commissioned a codex to record information about the Mexica (Aztec) Empire. The codex, now known as the Codex Mendoza, contained information about the lords of Tenochtitlan, the tribute paid to the Aztecs, and an account of life “from year to year.” The artist or artists were Indigenous, and the images were often annotated in Spanish by a priest that spoke Nahuatl, the language spoken by the Nahuas (the ethnic group to whom the Aztecs belonged). Viceroy Mendoza intended to send the Codex to the Spanish King, Emperor Charles V of Spain, although it never made it to Spain; French pirates acquired the Codex and it ended up in France. Upon its appearance in sixteenth-century France, it was acquired by André Thevet, the cosmographer to King Henry II of France, and Thevet included his name on several pages, including at the top of the Codex Mendoza’s frontispiece. 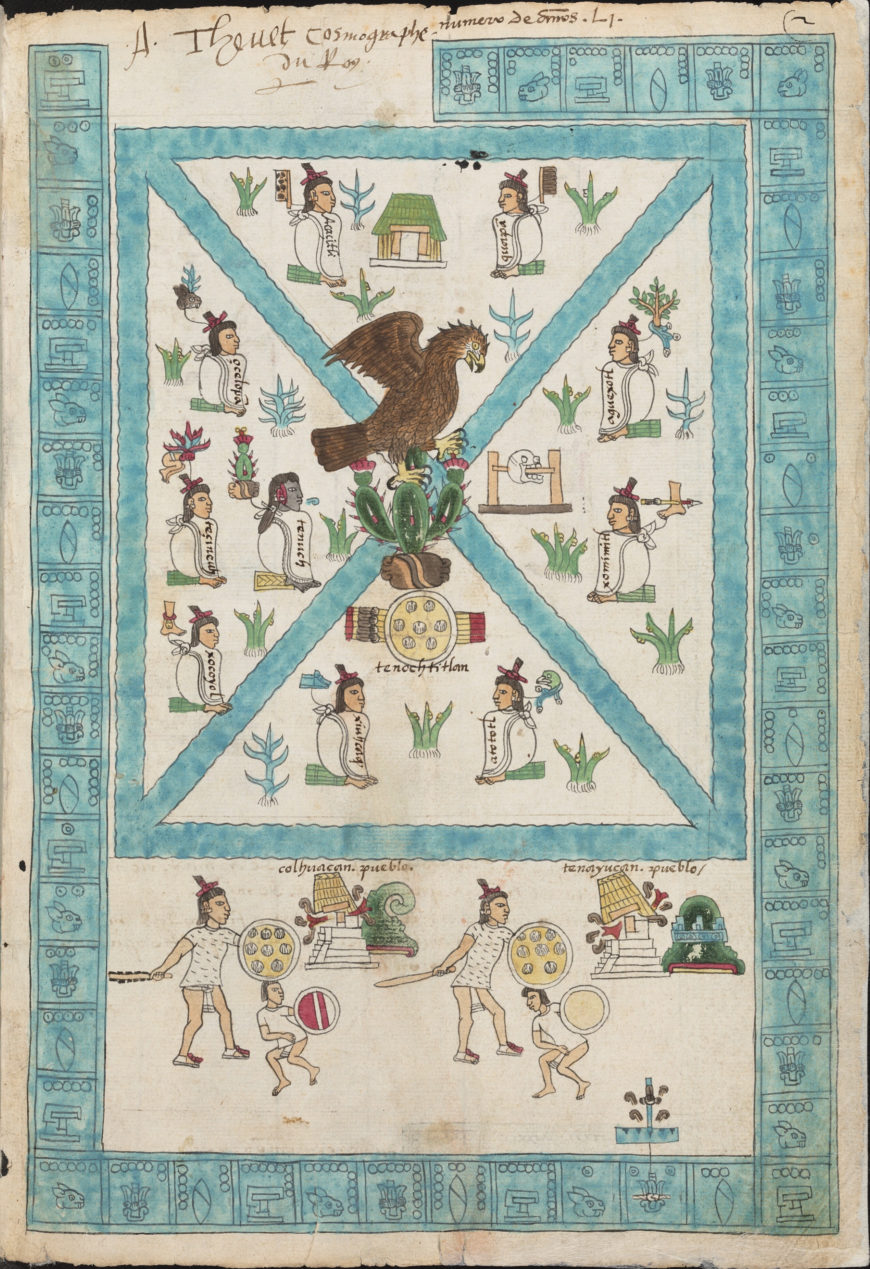 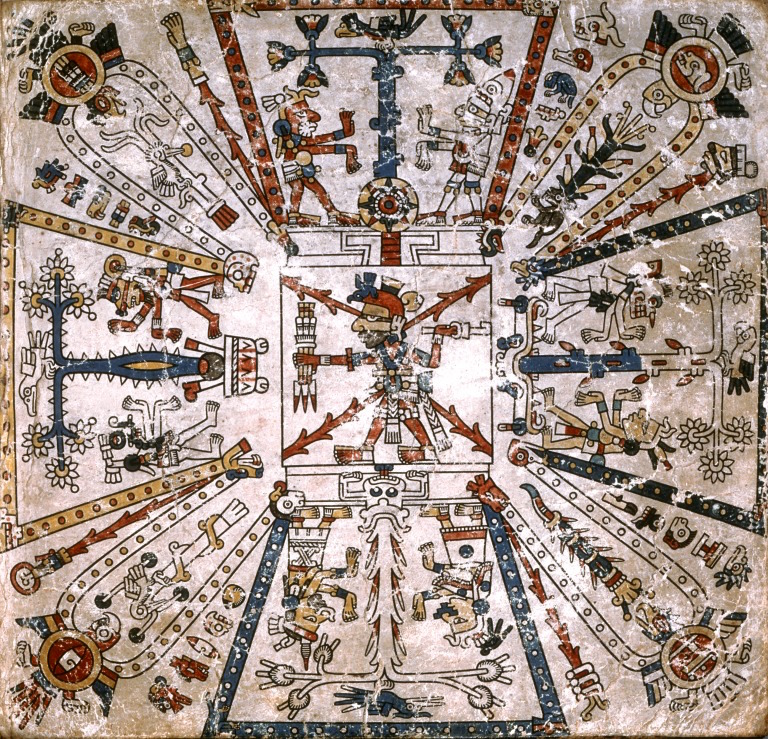 In the center of this cosmological diagram is the deity Xiuhtecuhtli (a fire god), standing in the place of the axis mundi. Four nodes (what look almost like trapezoidal petals) branch off from his position, creating a shape called a Maltese Cross. East (top) is associated with red, south (right) with green, west (bottom) with blue, and north (left) with yellow. Codex Féjervary-Mayer, 15th century, f. 1 (World Museum, Liverpool)

Given that much of the former Aztec capital is below modern-day Mexico City, the Codex Mendoza frontispiece corroborates other information we have about the capital city and its origins. For instance, it shows us a schematic diagram of Tenochtitlan, with the city divided into four parts by intersecting blue-green undulating diagonals. The city was made of canals, similar to the Italian city of Venice, and was divided into four quarters. The image displays the quadripartite division of the city and the canals running through it. The division of the city into four parts was intended to mirror the organization of the universe, believed to be four parts aligned with the four cardinal directions (north, east, south, west), such as we see represented in the Codex Féjervary-Mayer.

At the center of the schematic diagram of Tenochtitlan is an eagle on a cactus growing from the midst of a lake. The eagle and the cactus relate to the narrative surrounding the capital’s establishment. According to Aztec myth, their patron deity, Huitzilopochtli (Hummingbird Left), told the Aztecs’ ancestors to leave their ancestral home of Aztlan and look for a place where they saw an eagle atop a cactus growing from a rock. He informed them that when they saw this sign, they should settle and build their city. For the Aztecs, they observed the sign in the middle of Lake Texcoco, and so established their capital on an island in the lake.

The cactus upon which the eagle rests also symbolizes the place name of Tenochtitlan. The cactus is a nopal, or prickly pear cactus, which in Nahuatl is nochtli. The cactus grows from a stone, or tetl. When paired together, they form te-noch to connote the place of the prickly pear cactus, or Tenochtitlan. Today’s Mexican flag similarly displays the eagle on a nopal cactus growing from a stone in the middle of a lake, relating to the mythic origins of the Mexican capital.

Besides the eagle on the cactus, other figures and symbols on the frontispiece aid us in understanding the city’s foundation and early history. For instance, below the cactus and stone in the middle of the drawing is a war shield, indicating the Mexica did not settle peacefully in the Valley of Mexico. The simple structure above the eagle likely symbolizes a temple, possibly an early phase of the Templo Mayor, or the Aztecs’ main temple that was located at the heart of the city in the sacred precinct. To the right of the eagle is a simplified skull rack (tzompantli), another structure found near the Templo Mayor. Different types of plants, including maize, or corn, dot the city’s four quadrants, no doubt alluding to the agricultural fertility associated with the city. Ten men are also depicted in the four quadrants, wearing white garments and displaying top knots in their hair. These figures are the men who led the Aztecs to this island location. Their name glyphs are attached to them in a manner typical of pre-Conquest manuscripts; a thin black line connects to a symbol that denotes their name. One man, different than the rest and seated to the left of the eagle, has gray skin, as well as a different hairstyle and red mark around his ear. These traits identify him as a priest because he let blood from his ear as offerings to deities and ash covers his skin. His name glyph identities his as Tenoch. Other motifs, such as the speech scroll coming from his mouth and the woven mat upon which he sits, convey his high status as well. Tenoch died in 1363, and the first Aztec tlatoani, or speaker (the ruler), was elected in 1375 by a council of elders.

Surrounding the entire page are year glyphs, beginning on the upper left with the date 2-House (1325 C.E.) and finishing (counter clock-wise) with the date 13-Reed. There are a total of fifty-one year glyphs. One year is marked—the year 2-Reed, which occurred twenty-six years after Tenochtitlan’s establishment; the reed has a cord wound around it and a fire drill appears above it. These symbols note that the year 2-Reed was the first year of a new 52-year cycle, the time during which new fire was drilled to begin the new cycle and signal the completion of the previous 52-year cycle. For the Aztecs, the New Fire ceremony occurred every 52 years—a complete cycle of the solar calendar—and it assured that the sun would rise again. Just prior to the beginning of a new cycle, new fire was drilled in the body of a sacrificial victim. After this point, the fire was distributed among people to light their homes. Below the schematic diagram of the city are two scenes of military conquest. The artist emphasizes the military power of the Aztecs by showing two soldiers in hierarchic scale: they physically tower over the two men they defeat. The Aztec warriors are also identified by their shields—identical to the one above that is associated with Tenochtitlan—and their obsidian-bladed weapons (called macana). The defeated men come from two different locations, both identified with place glyphs as Colhuacan and Tenayuca, both located around Lake Texcoco. In this case, burning temples paired with specific hills note that Colhuacan and Tenayuca were defeated. Spanish glosses also identify these place names as “colhuacan pueblo” and “tenoyucan pueblo.” This scene of conquest alludes to early Aztec military victories, which aided them in building their power even prior to their first official tlatoani came to power.

Digital edition of the Codex Mendoza

Aztec Society, Foundation for the Advancement of Mesoamerican Studies

Aztec Group codices, Foundation for the Advancement of Mesoamerican Studies

Spoken excepts from the Codex Mendoza in Nahuatl, Spanish, and English, Bodleian Libraries