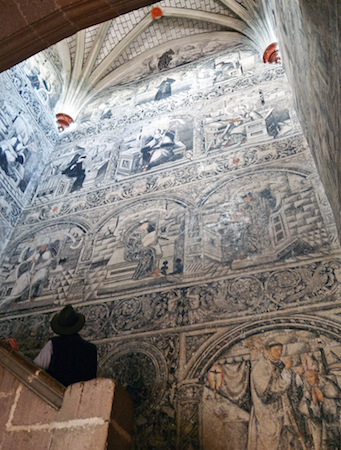 Immediately after the Conquest, Spanish colonizers set about the task of imposing Spanish culture, customs, and religion upon the native populations in New Spain (a Spanish colony that was comprised of what is now parts of the Caribbean, Mexico, Central America, and the southwestern United States up to northern California). One of the most important steps in this process was the conversion of the indigenous peoples to Christianity and the elimination of their religious beliefs—beliefs the Spaniards considered idolatry. Three different monastic orders arrived in New Spain to help convert indigenous populations: the Franciscans in 1524, Dominicans in 1526, and Augustinians in 1533. All three monastic orders were mendicants (monks who had taken vows of poverty). The orders directed the construction of conventos (conversion centers or missions)—built with the forced labor of indigenous peoples—where they would simultaneously celebrate the triumphs of Christianity and seek to destroy pagan practices. This process was supported by the construction of elaborate decorative schemes—often murals—that could visually express the word of God. 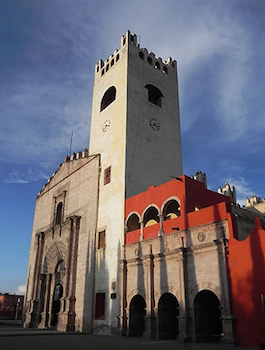 The murals in the stairwell and open chapel at the Convento San Nicolás de Tolentino in Actopan, a town in Hidalgo, Mexico, offer a unique view into early conversion practices and artistic projects in the decades immediately following the Spanish Conquest in 1521. They were painted in the mid-sixteenth century during the early colonial period of New Spain. The Augustinian friars were particularly concerned with the area around San Nicolás de Tolentino because they feared that continued resistance to Catholicism would lead the local indigenous Hñahñu/Otomí people to join with the nomadic Chichimecas who were particularly hostile to Spanish colonizers.

As a result, local Augustinians launched an aggressive conversion campaign to eradicate native beliefs and enforce religious conformity. This campaign included the creation of elaborate murals throughout the convento that illustrate the benefits of Christianity and the ramifications of continuing idolatrous practices. For example, the stairwell murals of the cloister (an open space surrounded by covered walkways) as well as in the open chapel (located on the side of the church) show the virtues of the Augustinian friar who acts against idolatry as well as the evils of sin and Satan. 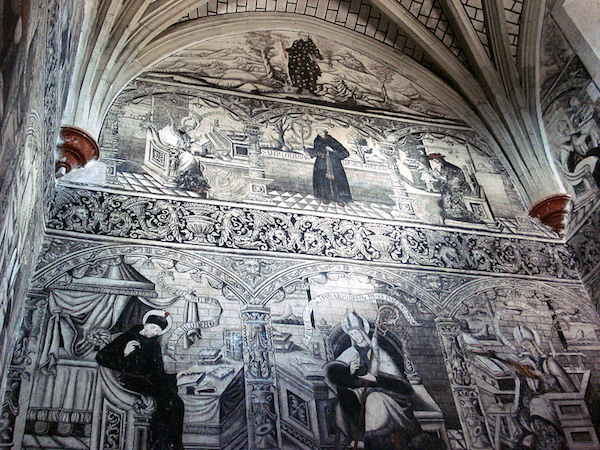 The murals on the stairway walls 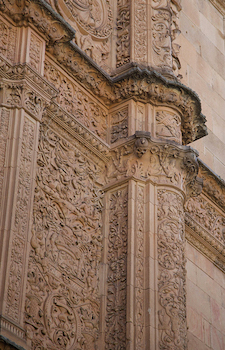 Black-and-white murals depicting Augustinian heroes (in other words, esteemed figures from the Augustinian tradition) cover every wall of the interior stairs at San Nicolás de Tolentino (above). The walls are divided into five horizontal tiers that rise up the two-story hall. Each tier contains an image of an arcade (a covered walkway with arches) of plateresque pilasters (below). The style is named for its affinity with silver work (plata means silver in Spanish). The plateresque style was common on architectural façades throughout Spain beginning in the 15th century and can be found on a number of institutions devoted to higher education, like the University of Salamanca in Spain (left). That the Augustinians would use the plateresque style makes sense given the order’s historical ties to education and intellectual pursuits. In fact, many distinguished Augustinians were professors of philosophy and theology at some of the greatest universities in Europe. In the murals, Augustinian heroes are shown sitting beside desks, either reading or writing (below). Several of the figures face the viewer with pens held up, as if we have caught them in mid-thought, emphasizing their roles as intellectuals and scholars and suggesting a sense of immediacy. 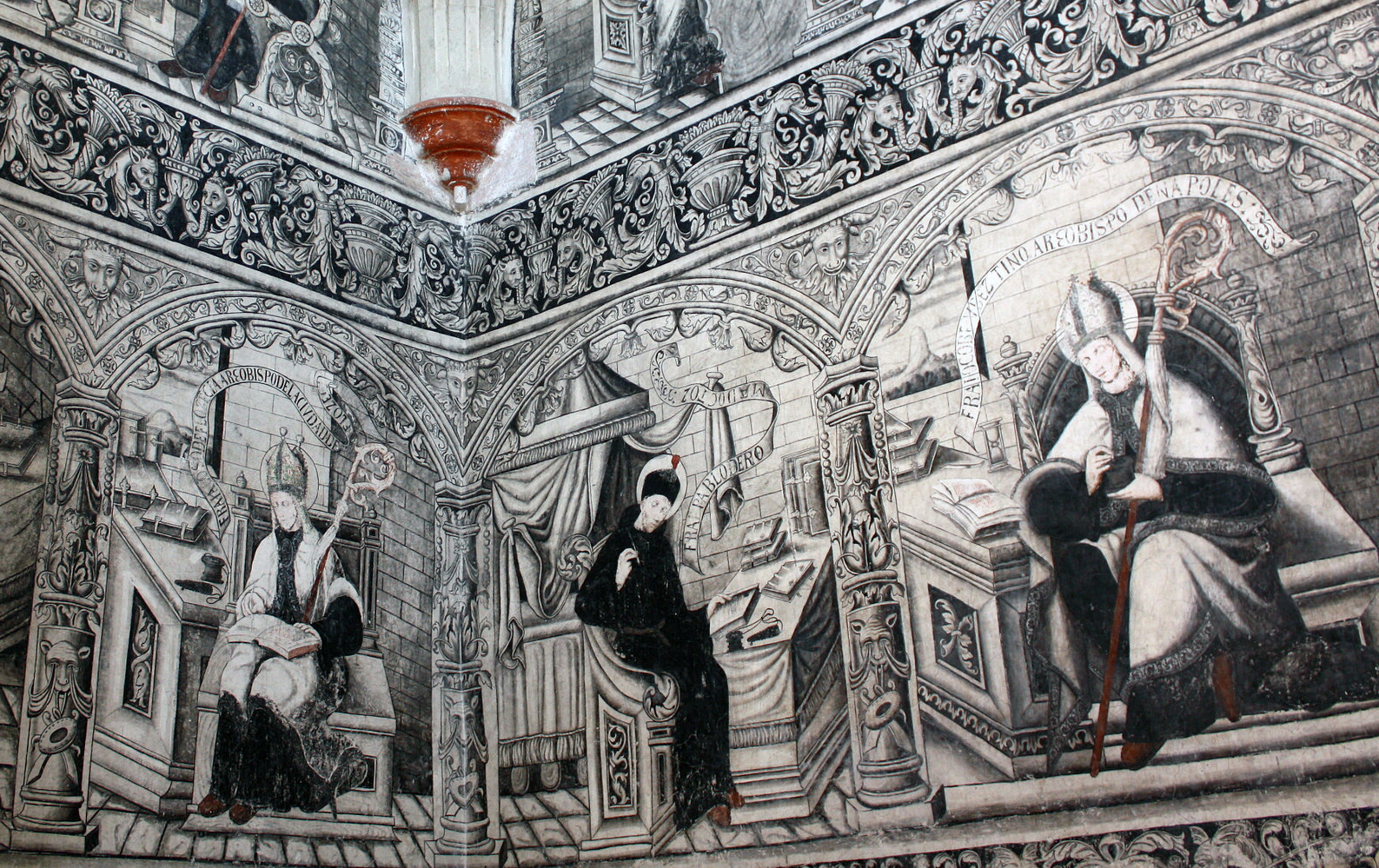 One section of the stair mural veers from the intellectual and scholarly model (below). It shows friar Martín de Acevedo on the far left (possibly the author of the mural program), and two indigenous men named Don Juan Atocpa and Don Pedro Izquicuitlapico (possibly patrons of the program). The three figures kneel and pray towards a small statue of the crucifixion in an outdoor setting. This scene emphasizes the potential for salvation and celebrates the converted indigenous men as a part of the convent. 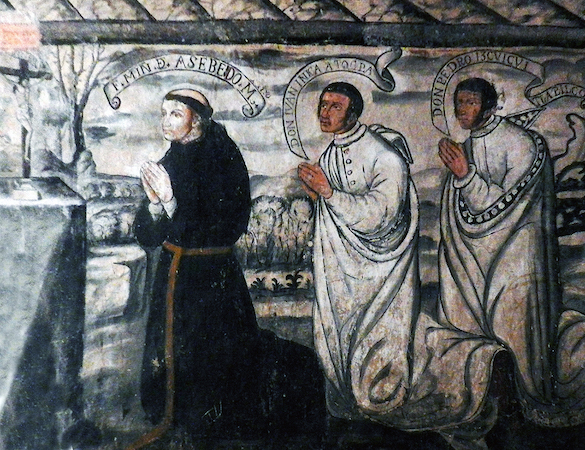 The influence of European prints 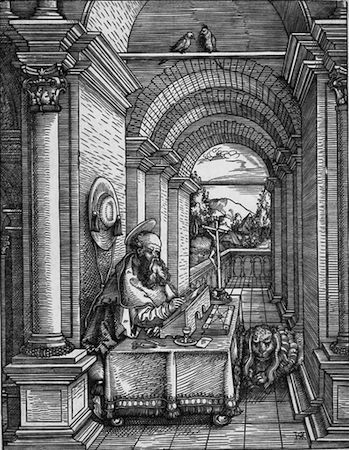 The artist’s method of depicting the seated heroes on a gridded floor framed in an arcade (see image above) demonstrates the influence of European prints (left). Prints imported from Europe had become useful in the evangelization process. Friars used them as educational tools and as artistic models.  In the absence of paintings or models with color, the murals maintained the grayscale palette so commonly found in prints. Since few European artists came to the Spanish viceroyalty in the sixteenth century, prints served as an opportunity to import European cultural and artistic practices and establish the superiority of Euro-Christian traditions.

The murals in the open chapel

In contrast to the mural paintings of the stair hall, the open chapel includes brightly colored narrative murals depicting scenes of sin and the Last Judgment (in the Christian tradition, the final and eternal judgment by God of all peoples). The architectural form of open chapels in early sixteenth-century missions varied, but they often took the form of an apse (the semi-circular area that surrounds an altar in a church) or arcaded porch that faced an atrium (an open plaza). The open chapels, which contained altars, were always located outside so many people could congregate in front of them. In this way, a large audience could see the altar during the celebration of mass or other religious events. 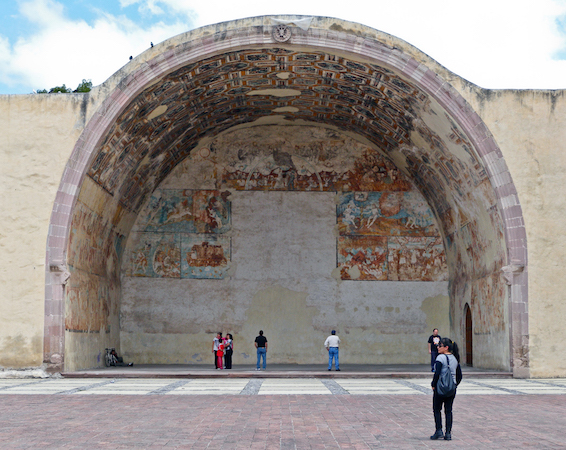 In the open chapel, friars also preached to a large indigenous audience to carry out their conversion practices. Since there were often only a few friars for entire communities of indigenous peoples, the convents needed a large space where friars could speak to many people. The open chapel allowed the friars to bring potential converts into one space and use sermons as well as images to root out idolatry and evangelize large groups of people together. 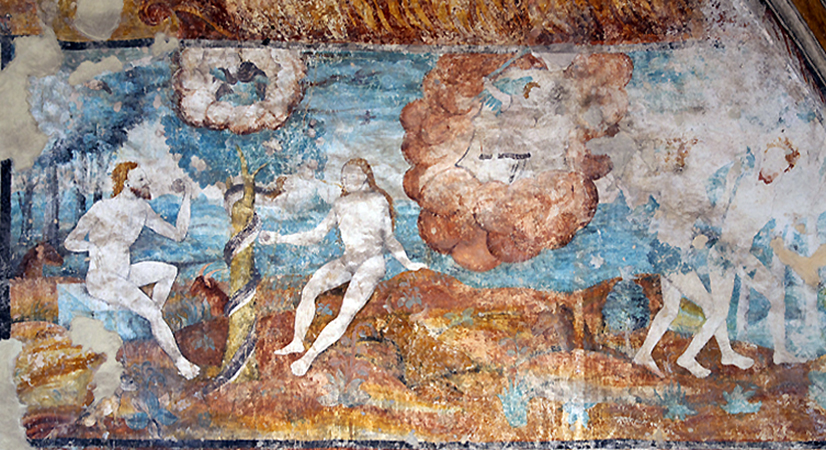 At Actopan, the back wall, where the altar was placed, contains a series of panels depicting important Catholic teachings, like the expulsion of Adam and Eve from the Garden of Eden (above), the destruction of Babylon, Purgatory, the Flood, and the Last Judgment—the latter depicted sinners being tortured by demons in the flames of Hell. These scenes correspond with the function of the open chapel as a conversion space. The missionaries believed that indigenous religions and practices were the direct result of Satan’s influence and saw it as their role to guide the indigenous population down the path to salvation and away from Satan’s grasp. In this way, the panels depicting God’s punishment for sinners and the path to Hell are a direct manifestation of the missionaries’ fears of idolatry and their attempt to save the souls of the local population. On the surrounding walls, additional scenes of torment and torture reinforce the dangers of Satan’s influence. 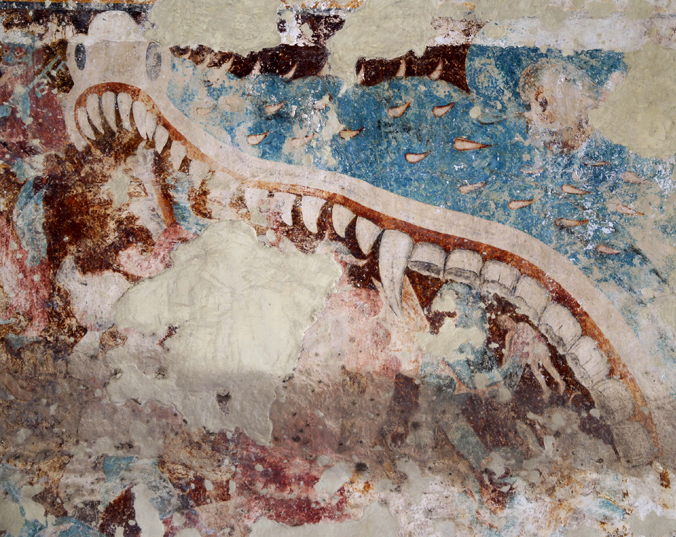 Though the imagery is drastically different from the stairwell murals, the open chapel murals also borrow from other examples of Christian art in Europe. For example, the motif of Adam and Eve cowering as they walk out of Eden is common throughout European art (for example, Masaccio’s fresco in the Brancacci Chapel in Florence). In the Actopan open chapel, Adam and Eve are initially shown nude in the Garden of Eden with a large snake entwined around a tree facing Eve. The narrative continues to show Adam and Eve, now with their genitals covered, as they leave Eden, as in Masaccio’s painting.

Importantly, the open chapel mural paintings highlight acts that the friars believed were particular dangers and temptations for the local indigenous communities. Sins such as adultery, idolatry and drunkenness are illustrated alongside demonic figures and figures supposed to represent the indigenous peoples. In one scene, an indigenous convert turns his back to a pagan temple, following instead a Spanish man towards the sun, which represents Jesus Christ in this case. Depicted on the left and right walls, a monstrous mouth (a “Hell Mouth”) devours sinners and confirms what awaits those who choose to follow idolatrous paths (above, left). Rather than the heavenly scene on the back wall, the adulterers, drunks, and idolaters fall into monstrous mouths and face horrifying scenes in the afterlife, including flaying and grilling (below). 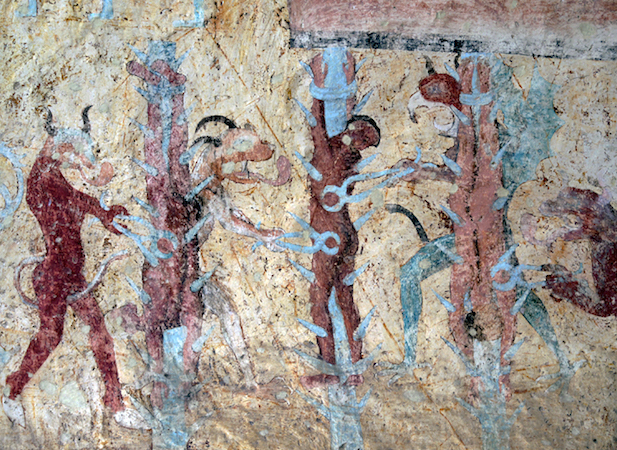 Directly above this scene, and topping the back wall, is a panel of the Last Judgment. The panel is split horizontally and shows primarily white Europeans, similar in dress and appearance to the friars. They are seated behind Christ in heaven, with a light color palette that is in stark contrast to the deep reds of hell. The figures in hell are shown as natives with darker skin, and they are included here to reinforce the message against the evils of indigenous cultural and religious practices.

The open chapel and the stair hall together offer two different motivations of the friars at Actopan—they wanted to establish their place within the lineage and history of other heroes of the Augustinian order and emphasize their roles as educators of the Christian faith. The murals also demonstrate the great fear and urgency of the evangelization process and the friars’ desire to eradicate idolatry. The juxtaposition of indigenous converts kneeling in the stairwell with the burning and tortured bodies of those who maintain idolatrous practices in the open chapel establishes the two potential outcomes for the local congregation.

Colonial mural paintings at the website of the Inter American Institute

Victor Manuel Ballesteros García, The Monasteries of the State of Hidalgo: Religious Expressions of the Art and the Culture of the Sixteenth Century (Pachuca, México Universidad Autónoma del Estado de Hidalgo, 2000).