The serpent played a very important role in Mexica* religion and many finely carved stone sculptures have survived. The majority of the serpents represented are rattlesnakes, often depicted with striking realism. In this example the body has been shortened into a highly stylized coil, a posture adopted by rattlesnakes when they are ready to attack. The pose, the bulging eyes and protruding fangs convey their power and strength. 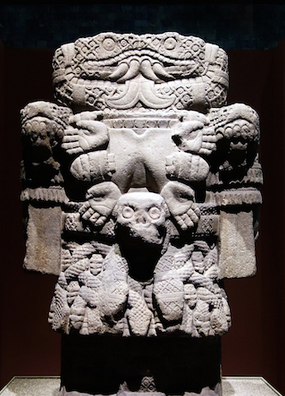 The word for serpent in Nahuatl, the language spoken by the Mexica, is coatl. Serpents were associated with several gods such as Quetzalcoatl (‘Feathered Serpent’), Xiuhcoatl (‘Fire Serpent’), Mixcoatl (‘Cloud Serpent’) or Coatlicue (‘She of the Serpent Skirt’), mother of the Mexica god Huitzilopochtli. The word coatl is also part of many place names, such as Coatepec (‘the hill of the serpents’). Coatepec is one of the most important places in Mexica mythology, the birthplace of the god Huitzilopochtli, the principal Mexica god.

Serpents were also used as architectural elements. For example, a wall of serpents (coatepantli) was used to delimit sacred spaces within a ceremonial area. At the Mexica capital, Tenochtitlan, such a wall was surrounding part of the Great Temple.

© Trustees of the British Museum)

Cite this page as: The British Museum, "Serpents in Mexica culture," in Smarthistory, March 11, 2021, accessed May 21, 2022, https://smarthistory.org/serpents-mexica/.