Map of the locations mentioned in this essay (map: ©Google) In 1987, Peruvian archaeologist Walter Alva received a tip from the police that local villagers had discovered gold in one of the huacas (a term for ancient sacred sites used widely in Peru) and were looting artifacts at the site of Huaca Rajada in the town of Sipán, near the modern city of Chiclayo on Peru’s northern coast. Recently, the local textile factory that had employed much of the town had suddenly shut down, and impoverished villagers turned to their local huaca for items to sell on the black market, largely driven by wealthy elites in the United States and Europe.

When Alva arrived at the scene, he discovered a rich Moche burial ground in Huaca Rajada, with some of the finest metalwork and ceramic pieces ever seen. This fateful night initiated an extensive archaeological excavation of the site over a period of nearly two decades, and excavation of the area continues today. The site has yielded over thirteen royal tombs, making it the richest burial site in the Western hemisphere.

This archaeological discovery was significant not only for the remarkable items contained within it, but because the tombs were found almost completely undisturbed due to the swift intervention on the part of the local police. Looted artifacts have been stripped from their archaeological context, making it very difficult for scholars to understand their original function and meaning.

A reconstruction of the tomb of the Lord of Sipán at Huaca Rajada (photo: Bernard Gagnon, CC BY-SA 3.0) 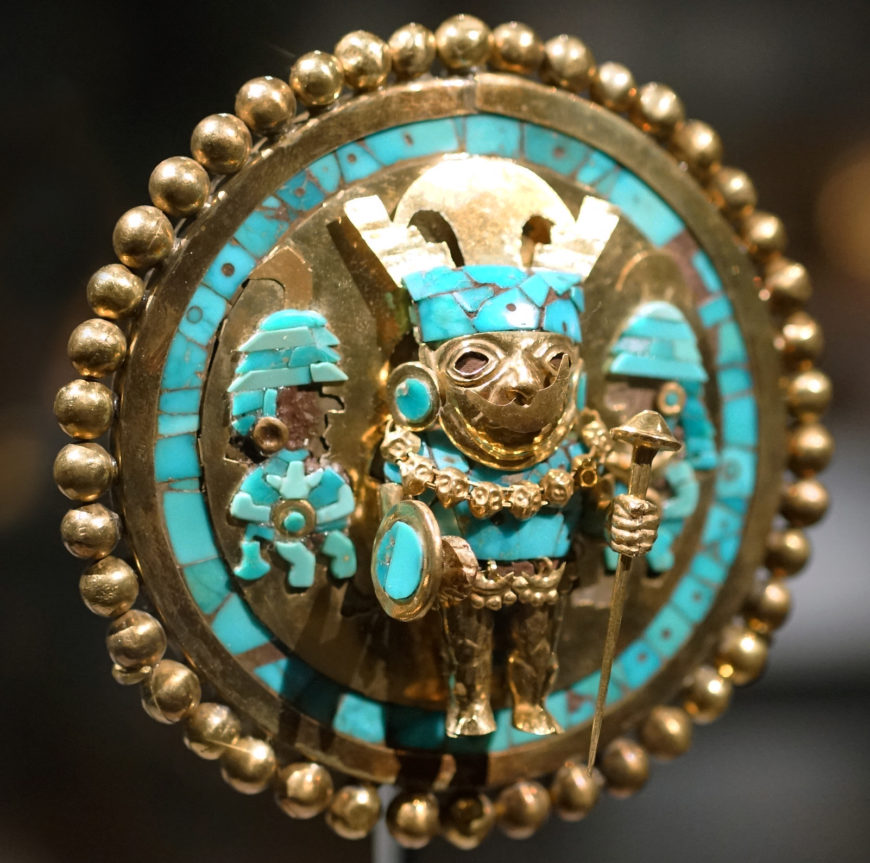 The thirteen burials and all of their associated artifacts were discovered in situ (in their original place), enabling archaeologists to associate specific objects with the buried individuals.

The largest burial was devoted to the individual the archaeologists named the Lord of Sipán, who was interred with 451 objects of gold, silver, copper, and turquoise. The quality of objects associated with the Sipán burials is superb, and would have required a massive and specialized workforce to create.

Among the objects found in the tomb were a pair of elaborate earflares depicting warriors, as well as another pair with deer, and others featuring geometric designs.

In the tomb of the Old Lord of Sipán (so called because archaeologist believe it is probably an ancestor of the Lord of Sipán), a resplendent necklace was found, composed of beads over three inches in diameter that feature a spider whose body markings resemble a human face and warrior’s helmet, emphasizing the relationship between warfare and sacrifice in the Moche world (spiders, which ensnare and devour their prey, were associated with rituals featuring the sacrifice of bound prisoners, as well as a god that some modern scholars have called the “Decapitator”). Detail of a vessel representing the Sacrifice Ceremony, with the Warrior Priest on the left and the Owl Priest on the right, 500–700 C.E., ceramic (photo: Sarahh Scher, CC BY-NC-ND 4.0)

By discovering the tombs in their original context, archaeologists were also able to make an even larger discovery about Moche art as a whole. The Sacrifice Ceremony, found painted on ceramics and the walls of temples in parts of the Moche world, attained greater meaning after the Sipán discoveries.

The Sacrifice Ceremony involves the ritual sacrifice of prisoners, whose blood is collected in goblets and presented as an offering to the Warrior Priest by his entourage. While the images vary across media, all of the Sacrifice Ceremony scenes frequently include the figures scholars have dubbed the Warrior Priest and the Owl Priest, often accompanied by a Priestess and other figures.

The Sipán excavations revealed that these figures were not merely mythological characters, but were connected to real humans who were buried in regalia similar to those in the painted representations. By cross-referencing the tombs and their contents with Moche iconography, the Sipán burials allowed scholars to gain a better understanding of how the characters may have been a part of elite symbols of power and prestige. While the ensembles in the Sipán tombs do not directly correlate to the costumes seen in the Sacrifice Ceremony, they contain many similar elements, showing how some Moche elites identified themselves with the major actors in the Sacrifice Ceremony. At another Moche site, San José de Moro, elite women over many generations were buried with objects that identified them with the Priestess of the Sacrifice Ceremony. This gold backflap, an article of clothing hung from the belt and perhaps meant to protect the lower back, was part of a warrior’s costume in Moche art. This example is topped with a depiction of the Decapitator, who holds a ceremonial knife called a tumi in his right hand, and a severed human head in his left. The backflap’s overall shape echoes the shape of the tumi. The half-spheres surrounding the Decapitator are actually rattles, enclosing within them small pellets of metal that would have made sound as the person wearing the backflap moved.

The backflap was one of the items originally looted from the Huaca Rajada in 1987, and was trafficked out of the country sometime between 1995 and 1997. In 1997, undercover FBI agents purchased it in a sting operation that took place in a rest stop along the New Jersey Turnpike. On July 15, 1998, the FBI held a ceremony to officially return the backflap to Peru, and it is now in the Museo de la Nación in Lima. The items excavated from of the Sipán tombs are housed in the Museo Tumbas Reales de Sipán in nearby Chiclayo.

Read about the FBI involvement in recovering the backflap

Read more about Moche ceramics at the Metropolitan Museum of Art