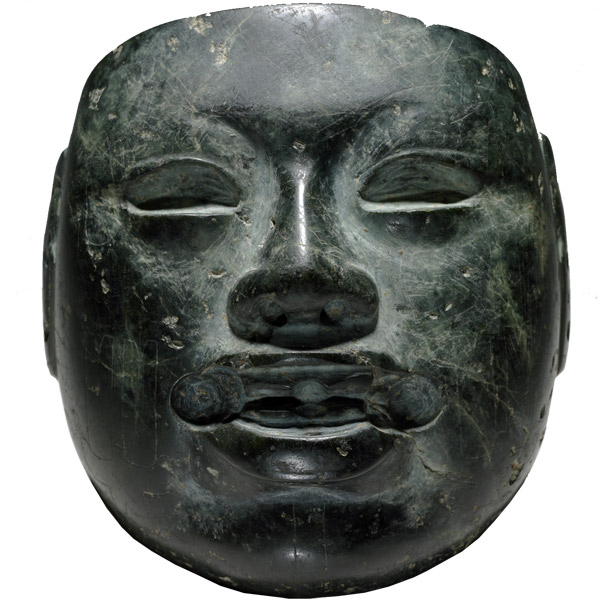 This mask was probably worn around the neck as a pendant and may have given the wearer a new identity, perhaps that of an ancestor or a god. It was made by the Olmecs, the earliest known settled civilization of Central America.

The Olmecs lived in the low-lying Gulf Coast area of what is now Mexico in about 1200-400 B.C.E. at sites such as San Lorenzo, Tres Zapotes, Laguna de los Cerros and La Venta.

These and the other Olmec centers were well planned and included many of the features that would be associated with later civilization in Central America including the Mexica (Aztecs) and Maya. Alongside impressive public spaces and large platform-mounds made of earth, there is evidence of a ceremonial ball game and complex astrological calendars.

Olmec art is very distinctive and clearly reflects their religion. Jaguars feature prominently because the Olmecs believed that, in the distant past, a union between a woman and a jaguar produced an earlier race of were-jaguars.

The Olmecs worked mainly in stone and particularly favored jade, or greenstone, which they believed had distinctive properties linked with fertility and procreation. These sought-after materials were brought into the region through long distance trade networks.

The head above is made from a dark green stone called serpentinite and would have been worked by skilled craftspeople using hand tools.

On either side of the mouth (detail above) there are two Olmec glyphs (picture signs). Olmec glyphs are the earliest known writing in America. These fine-line motifs symbolically define the four quarters of the human world with the king as ruler at the center. The Olmec art style is found on objects as far afield as the Valley of Mexico to the north and the Pacific coast of Chiapas to the south. This suggests a widely-shared set of beliefs that was to have a profound influence on many later Mesoamerican stylistic traditions.

M. Miller, and K. Taube, The Gods and Symbols of Ancient Mexico and the Maya: An Illustrated Dictionary of Mesoamerican Religion (London, 1993).