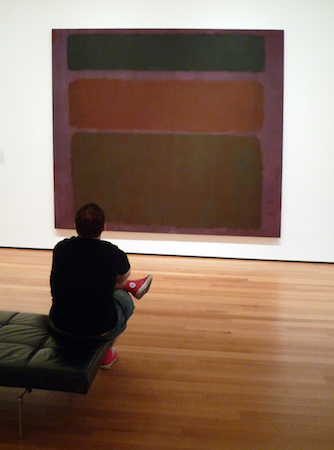 The group of artists known as Abstract Expressionists emerged in the United States in the years following World War II. As the term suggests, their work was characterized by non-objective imagery that appeared emotionally charged with personal meaning. The artists, however, rejected these implications of the name.

They insisted their subjects were not “abstract,” but rather primal images, deeply rooted in society’s collective unconscious. Their paintings did not express mere emotion. They communicated universal truths about the human condition. For these reasons, another term—the New York School—offers a more accurate descriptor of the group, for although some eventually relocated, their distinctive aesthetic first found form in New York City.

The rise of the New York School reflects the broader cultural context of the mid-Twentieth Century, especially the shift away from Europe as the center of intellectual and artistic innovation in the West. Much of Abstraction Expressionism’s significance stems from its status as the first American visual art movement to gain international acclaim.

Art for a world in shambles

Barnet Newman, an artist associated with the movement, wrote:

“We felt the moral crisis of a world in shambles, a world destroyed by a great depression and a fierce World War, and it was impossible at that time to paint the kind of paintings that we were doing—flowers, reclining nudes, and people playing the cello.”¹

Although distinguished by individual styles, the Abstract Expressionists shared common artistic and intellectual interests. While not expressly political, most of the artists held strong convictions based on Marxist ideas of social and economic equality. Many had benefited directly from employment in the Works Progress Administration’s Federal Art Project. There, they found influences in Regionalist styles of American artists such as Thomas Hart Benton, as well as the Socialist Realism of Mexican muralists including Diego Rivera and José Orozco.

The growth of Fascism in Europe had brought a wave of immigrant artists to the United States in the 1930s, which gave Americans greater access to ideas and practices of European Modernism. They sought training at the school founded by German painter Hans Hoffmann, and from Josef Albers, who left the Bauhaus in 1933 to teach at the experimental Black Mountain College in North Carolina, and later at Yale University. This European presence made clear the formal innovations of Cubism, as well as the psychological undertones and automatic painting techniques of Surrealism.

Whereas Surrealism had found inspiration in the theories of Sigmund Freud, the Abstract Expressionists looked more to the Swiss psychologist Carl Jung and his explanations of primitive archetypes that were a part of our collective human experience. They also gravitated toward Existentialist philosophy, made popular by European intellectuals such as Martin Heidegger and Jean-Paul Sartre.

Given the atrocities of World War II, Existentialism appealed to the Abstract Expressionists. Sartre’s position that an individual’s actions might give life meaning suggested the importance of the artist’s creative process. Through the artist’s physical struggle with his materials, a painting itself might ultimately come to serve as a lasting mark of one’s existence. Each of the artists involved with Abstract Expressionism eventually developed an individual style that can be easily recognized as evidence of his artistic practice and contribution.

Although Abstract Expressionism informed the sculpture of David Smith and Aaron Siskind’s photography, the movement is most closely linked to painting. Most Abstract Expressionist paintings are large scale, include non-objective imagery, lack a clear focal point, and show visible signs of the artist’s working process, but these characteristics are not consistent in every example.

In the case of Willem de Kooning’s Woman I, the visible brush strokes and thickly applied pigment are typical of the “Action Painting” style of Abstract Expressionism also associated with Jackson Pollock and Franz Kline. Looking at Woman I, we can easily imagine de Kooning at work, using strong slashing gestures, adding gobs of paint to create heavily built-up surfaces that could be physically worked and reworked with his brush and palette knife. De Kooning’s central image is clearly recognizable, reflecting the tradition of the female nude throughout art history. Born in the Netherlands, de Kooning was trained in the European academic tradition unlike his American colleagues. Although he produced many non-objective works throughout his career, his early background might be one factor in his frequent return to the figure.

In contrast to the dynamic appearance of de Kooning’s art, Mark Rothko and Barnett Newman exemplify what is sometimes called the “Color Imagist” or “Color Field” style of Abstract Expressionism. These artists produced large scale, non-objective imagery as well, but their work lacks the energetic intensity and gestural quality of Action Painting. Rothko’s mature paintings exemplify this tendency. His subtly rendered rectangles appear to float against their background. For artists like Rothko, these images were meant to encourage meditation and personal reflection.

Adolph Gottlieb, writing with Rothko and Newman in 1943, explained, “We favor the simple expression of the complex thought.”²

Barnett Newman’s Vir Heroicus Sublimis illustrates this lofty goal. In this painting, Newman relied on “zips,” vertical lines that punctuate the painted field of the background to serve a dual function. While they visually highlight the expanse of contrasting color around them, they metaphorically reflect our own presence as individuals within our potentially overwhelming surroundings. Newman’s painting evokes the 18th century notion of the Sublime, a philosophical concept related to spiritual understanding of humanity’s place among the greater forces of the universe.

Throughout the 1950s, Abstract Expressionism became the dominant influence on artists both in the United States and abroad. The U.S. government embraced its distinctive style as a reflection of American democracy, individualism, and cultural achievement, and actively promoted international exhibitions of Abstract Expressionism as a form of political propaganda during the years of the Cold War. However, many artists found it difficult to replicate the emotional authenticity implicit in the stylistic innovations of de Kooning and Pollock. Their work appeared studied and lacked the same vitality of the first generation pioneers. Others saw the metaphysical undertones of Abstract Expressionism at odds with a society increasingly concerned with a consumer mentality, fueled by economic success and proliferation of the mass media. Such reactions would inevitably lead to the emergence of Pop, Minimalism, and the rise of a range of new artistic developments in the mid 20th century.

1. Barnett Newman, “Response to the Reverend Thomas F. Mathews,” in Revelation, Place and Symbol (Journal of the First Congress on Religion, Architecture and the Visual Arts), 1969. 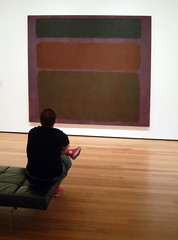 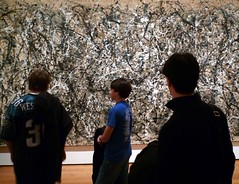 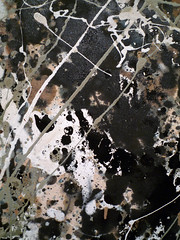