Juan Gris’ The Table depicts a Cubist still life using an elaborate combination of traditional naturalism, abstraction, and papier collé (pasted paper collage). Objects or parts of objects, including a pipe, a glass, bottles, and a key, have been meticulously drawn and shaded in charcoal. Their arrangement is, however, abstract, and many of them have been broken into sections and partly obscured. A tangle of forms

Most of the objects are depicted from above and are placed along one of two distinct axes: one vertical and one diagonal. Aligned with the vertical axis we see a wine bottle on the right, the upper portion of a glass with its circular lip in the center, an open book at the bottom, and the stripes of the flowered wallpaper. A second wine bottle is canted at a diagonal in the center of the composition; to the left another open book and the pedestal bottom and stem of a wineglass are placed at the same angle, as is the cut right edge of a piece of wood grain paper.

Gris used a variety of papers in this work. In addition to the wallpaper and the printed wood grain paper, there is a page from a detective novel, part of the front page of a newspaper, and different types of unprinted paper. The charcoal drawings and paint appear on all the papers, creating a woven tangle of forms in which it is impossible to clearly determine the represented location and spatial relationships of the objects.

The True and the False

The newspaper headline is directly relevant to Gris’ playful Cubist approach to representation. It is slightly obscured but still legible and reads “Le Vrai et le Faux Chic” — “The True and the False Fashion.” The paper’s masthead, also partially visible as “LE JU” is an elision of “Le Journal” (newspaper), and a pun on the French words for “to play” (jouer) and “toy” (le jouet) that was frequently used by Picasso and Braque in their Cubist still lifes.

The newspaper headline states the theme of the work, a play between the real and the fake. Although we reflexively associate the Western naturalistic style with ‘reality’ and ‘truth’, compared to the charcoal drawings it is the collaged papers that are real things — a real newspaper, a real page from a book — not representations of things. The wood grain on the printed paper, called faux bois (fake wood) in French, is, however, obviously fake despite its material presence. Gris displays various tricks and conceptual puzzles related to pictorial illusionism throughout the work. Above the headline “Le Vrai et le Faux” he depicted two cigarettes. One is painted white and stands out against the darker background to create a trompe l’oeil image with shadowed edges covering part of the the masthead. Below this cigarette is a second one only sketched in outline. This one makes no attempt to fool the viewer into thinking it is a real cigarette; it is simply a drawing. Which one is “true,” the one that tricks the viewer into thinking it is really there, or the one that announces itself as what it is, lines drawn on paper? 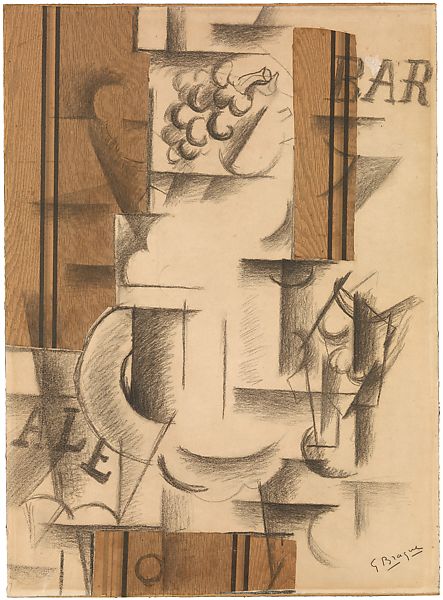 Such plays between representation and reality were common in the Synthetic Cubist still-life paintings of Picasso and Braque as well. In the first papier collé, Fruit Dish and Glass, Braque contrasted faux bois paper with realistically rendered grapes, a reference to the ancient Greek painter Zeuxis, who was said to have painted grapes so realistic that birds pecked at them. In Fruit Dish and Glass, Braque also drew a circle on the lower strip of woodgrain paper to represent the knob of a drawer pull facing the viewer. Gris uses a much more naturalistic drawing of a key in a drawer in a similar manner, as well as depicting a book with its collaged page as a three dimensional object projecting over the table’s edge. Both suggest that the objects are real and within the viewer’s reach — a common strategy used in naturalistic still life paintings to convince viewers that their illusionistic objects are real. In The Table, Gris developed the Cubist techniques and representational strategies used by Picasso and Braque into something distinctly his own. His drawings do not radically deconstruct objects as Picasso did in his drawing of a glass in Guitar, Sheet Music and Glass. Gris’ wine bottles are naturalistically drawn, as are the parts of his wineglass in the upper center and left of the canvas. He does, however, use the deconstructive formal vocabulary of Analytic Cubism when he detaches the rim of the glass and the lips of the bottles from their bodies to draw them as perfect circles.

For many contemporary art critics Gris’ painting was considered both extremely logical and the best example of Cubism as an art of conception rather than perception. He presents objects as they are known/conceived rather than as they are seen/perceived. His depiction of the rims of glasses as perfect circles combined with drawing the rest of the glasses in profile is a conceptual approach because it shows key aspects of the object simultaneously, even though they cannot both be seen at once in reality.

In addition to describing the essential form of objects, note how the circles in The Table align with the main diagonal and vertical axes of the composition, creating a pattern of formal rhymes throughout the work. This is one of the most distinctive aspects of Gris’ style, the development of complex surface patterns based on a systematic geometric order. The background checkerboard pattern of Guitar and Glasses organizes the distribution of objects laid upon the café table, aligning everything into an interwoven vertical, horizontal, and diagonal grid. In some of his earliest Cubist works, such as Man in a Café, Gris used the golden section system of harmonious proportions to organize his compositions, but even when he worked more intuitively, his paintings and collages were structured to emphasize clear geometric forms and formal balance.

For some influential early critics and theorists of Cubism, the conceptual clarity and formal harmony of Gris’ paintings exemplified the art movement’s achievements. He had close connections to the Salon Cubists as well as to Picasso and Braque. Man in a Café was shown in the Section d’Or exhibition in 1912, after which Picasso and Braque’s dealer, Daniel Henry Kahnweiler, offered Gris a contract and he began to focus more specifically on still life subjects. The decorative qualities of Gris’ work with its rich colors and strong geometric structure would become key characteristics of late Cubism and Purism as they developed during and after World War I.

Read more about Juan Gris at the Guggenheim