An inchoate mob of savage creatures surges toward the viewer in Max Ernst’s The Horde, a painting that was made using automatic techniques intended to make the artist’s unconscious thoughts visible. In keeping with Freudian theories, Ernst’s unconscious is a site of turmoil where monstrous figures overwhelm rational understanding. The Horde suggests the dread associated with childhood fears of nameless beasts lurking in the closet and under the bed. The figures in Ernst’s painting are terrifying because they are both familiar and utterly strange; we recognize them as creatures of our own imagination as much as the artist’s.

The creativity of the unconscious

Automatism was a group of techniques used by the Surrealists to facilitate the direct and uncontrolled outpouring of unconscious thought. In his first Surrealist Manifesto, André Breton provided a dictionary-style definition that made automatism virtually a synonym of Surrealism.

SURREALISM, n. Psychic automatism in its pure state by which one proposes to express—verbally, by means of the written word, or in any other manner, the actual functioning of thought. Dictated by thought, in the absence of any control exercised by reason, exempt from any aesthetic or moral concern.[1] 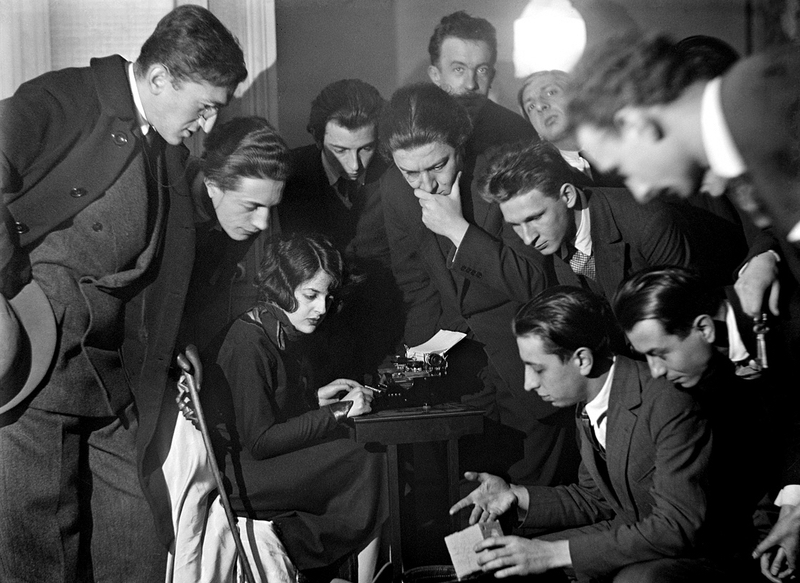 Derived in part from the “spirit writing” of mediums who were believed to be conduits for messages from the afterlife, and in part from psychiatric methods used to obtain uninhibited monologues from patients, the Surrealists cultivated techniques of speaking or writing rapidly without any specific goal or conscious direction. In doing this they were attempting to externalize the kind of thinking evident in dreams, where, according to Sigmund Freud, everyone is a poet.

For the Surrealists, automatism revealed the source of inspiration and original invention in the human mind. It could be used to make truly creative production available to everyone, a first step in the Surrealist transformation of the world. They believed that the sheer speed of automatic writing and automatic speech bypassed logic, aesthetic conventions, and social inhibitions to allow a direct transcription of unconscious thoughts and desires. The Surrealists experimented with numerous techniques in an attempt to find parallels to automatic writing appropriate for making visual art. The drawings of mediums were an early model because they were generated according to the dictates of their guiding spirits without the medium being conscious of what they were drawing. Some Surrealists doubted that artists could achieve a similarly direct and unconscious form of meaningful visual production, but over the years Surrealist artists developed numerous automatic techniques that served as a basis for creating successful artworks.

In all their automatic techniques Surrealist artists attempted to eliminate conscious intention, typically by using arbitrary methods that allowed chance to play a key role. André Masson, for example, employed random drippings of gesso, paint, and sand on canvas. Produced without the intervention of conscious intentions, the artist’s hand was theoretically responding to the dictates of his unconscious as it made the random marks. Subsequently, Masson would discover figures and scenes in the suggestive forms generated by his automatic markings. These found images were also theoretically prompted by his unconscious needs and desires, and he consciously enhanced them with pencil to create figures and scenes such as Battle of Fishes.

The example of Leonardo da Vinci

Masson’s technique combined automatism with conscious refinements. This was typical of many Surrealist artists who employed forms of direct automatic production and then enhanced the resulting suggestive marks to create a more legible image. They also frequently left some forms vague so they could be interpreted in many different ways. Ambiguous forms allow viewers to engage imaginatively with the artwork and create an image that responds to their own unconscious desires.

Leonardo da Vinci provided an explicit precedent for the employment of such procedures when he suggested that artists seek inspiration in the suggestive forms of an old wall’s damaged surface. Max Ernst systematized Leonardo’s approach when he developed frottage and grattage. To make frottages such as these from the Natural History series, Ernst rubbed charcoal on paper placed over textured objects. Grattage, used to create The Horde, is a similar technique developed for oil painting, in which different colors are painted on canvas in layers and allowed to dry. The textures of objects placed under the canvas are transferred to the painted surface by scraping away the upper layer of paint. 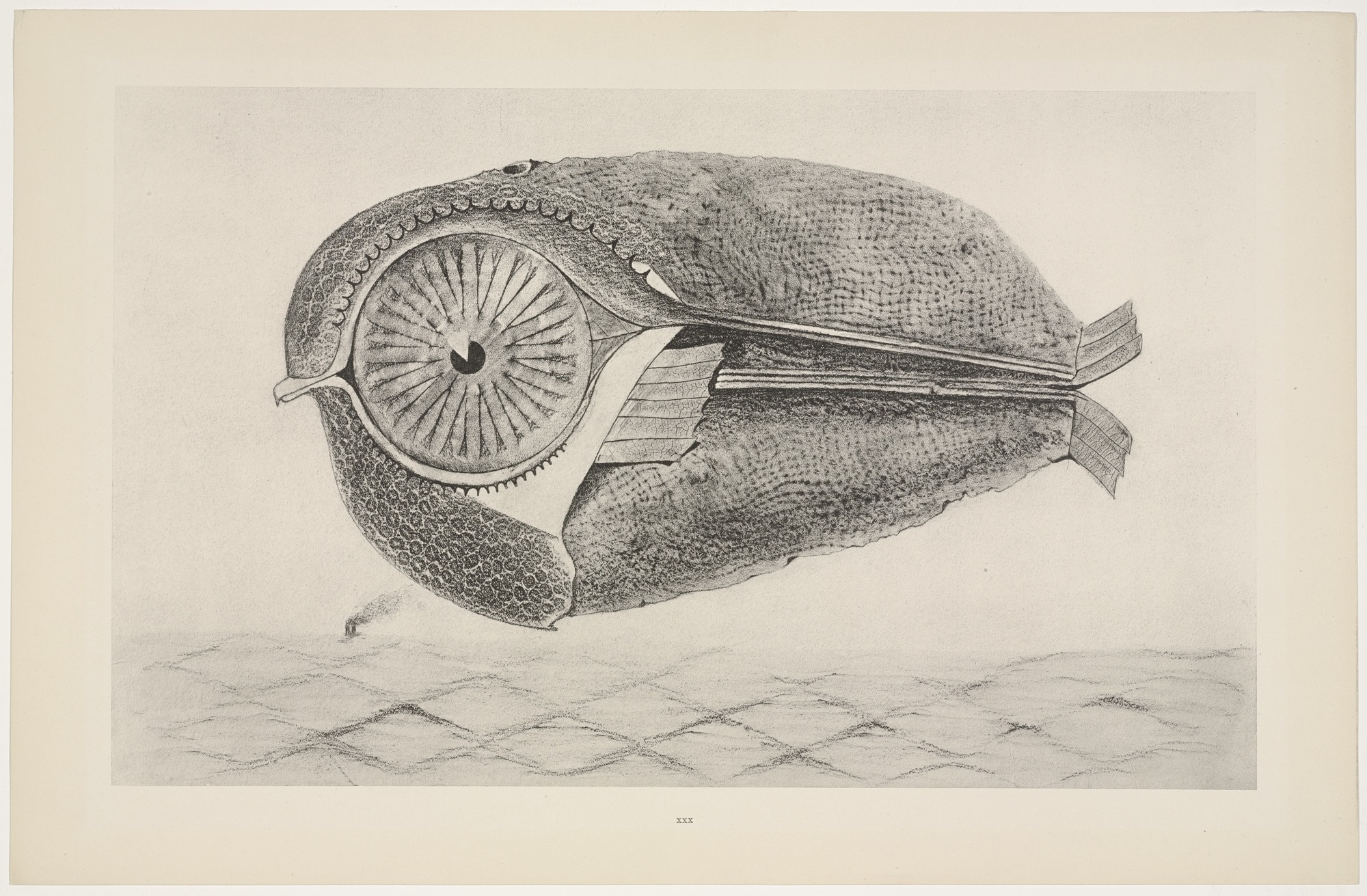 Ernst claimed the arbitrary markings resulting from frottage intensified his “visionary capacities” and provoked hallucinations of strange figures and landscapes. These, he believed, were the result of his own unconscious obsessions. Like Masson, Ernst subsequently developed his arbitrarily-generated forms by adding drawing or arrangements to make the unconscious images he discovered more easily visible to others. Oscar Dominguez invented another automatic technique, decalcomania, which involved dripping ink or gouache on paper and then pressing the wet surface with a second sheet of paper. The resulting arbitrary blots could be named by the creator according to the images seen in the work, or left untitled for viewers to discover their own images. Unlike Ernst’s and Masson’s earlier automatic techniques, decalcomania did not require any conscious adjustments by the artist to complete the work. The Surrealist leader André Breton hailed it as a complete fusion of chance forms and imaginative vision, uncorrupted by previously learned artistic techniques or conscious intention.

Although the Surrealists’ goal was to manifest unconscious thought in their artistic productions, they did not restrict themselves to automatic techniques. They were afraid that if they established any specific technique as the “right” way to make Surrealist art it would be used superficially to create a style rather than to manifest authentic unconscious activity. Ultimately, the Surrealists supported artists who employed many different styles and approaches to create works that accorded with the goal of unconsciously-inspired creative production.

One of the key characteristics of works produced using automatic techniques was the generation of suggestive forms that promoted multiple associations. Even when Surrealist artists did not use specific automatic techniques they often relied on the power of abstract shapes to generate associations consciously and unconsciously. They understood this as employing a mechanism common to dreams, automatic writing, poetry, and even simple puns in which similar sounds generate new meanings and associations. Both Joan Miró and Jean Arp exploited the associations generated by simple abstract visual forms placed in relation to each other to create playful works that reveal the rich possibilities of unconscious associations. At first glance, Miró’s Maternity may appear to be a work of geometric abstraction or a diagram of a whirligig. Closer inspection reveals that the abstract shapes create a comical, crudely simplified image of a woman with two small children floating in space. The figures are reduced to basic signs; the mother is signified by a dark segment of a circle with a smaller circle pierced through it — a skirt with a hole. Crossing her body is a diagonal line terminating in her breasts, one frontal and the other in profile, from which her children hang like decorative anchors. Her head with its radiating rays of hair is comparatively tiny. Arp’s wood relief Woman similarly presents a figure in extremely reduced abstract forms. The organic shapes seem to shift in their references to various body parts, as well as suggesting altogether different things. The shape defining the navel also suggests a vagina, while the breasts may also seem to be the shape of flying birds. Such fluidity of reference was at the heart of the Surrealist appreciation of the potential of visual art. In addition to demonstrating the fecundity of the artist’s imagination, suggestive abstracted forms allowed viewers to discover and strengthen their own subconscious thoughts and desires by contributing imaginatively to the meaning, and thus to the making, of the work. All Surrealist strategies used to create visual art demonstrated the mind’s ability to transform a given reality by transforming its ambiguities into significant imagery according to the dictates of the unconscious.

André Masson at the Guggenheim Museum

Joan Miró at the Guggenheim Museum

Jean Arp at the Guggenheim Museum

Yves Tanguy at the Guggenheim Museum