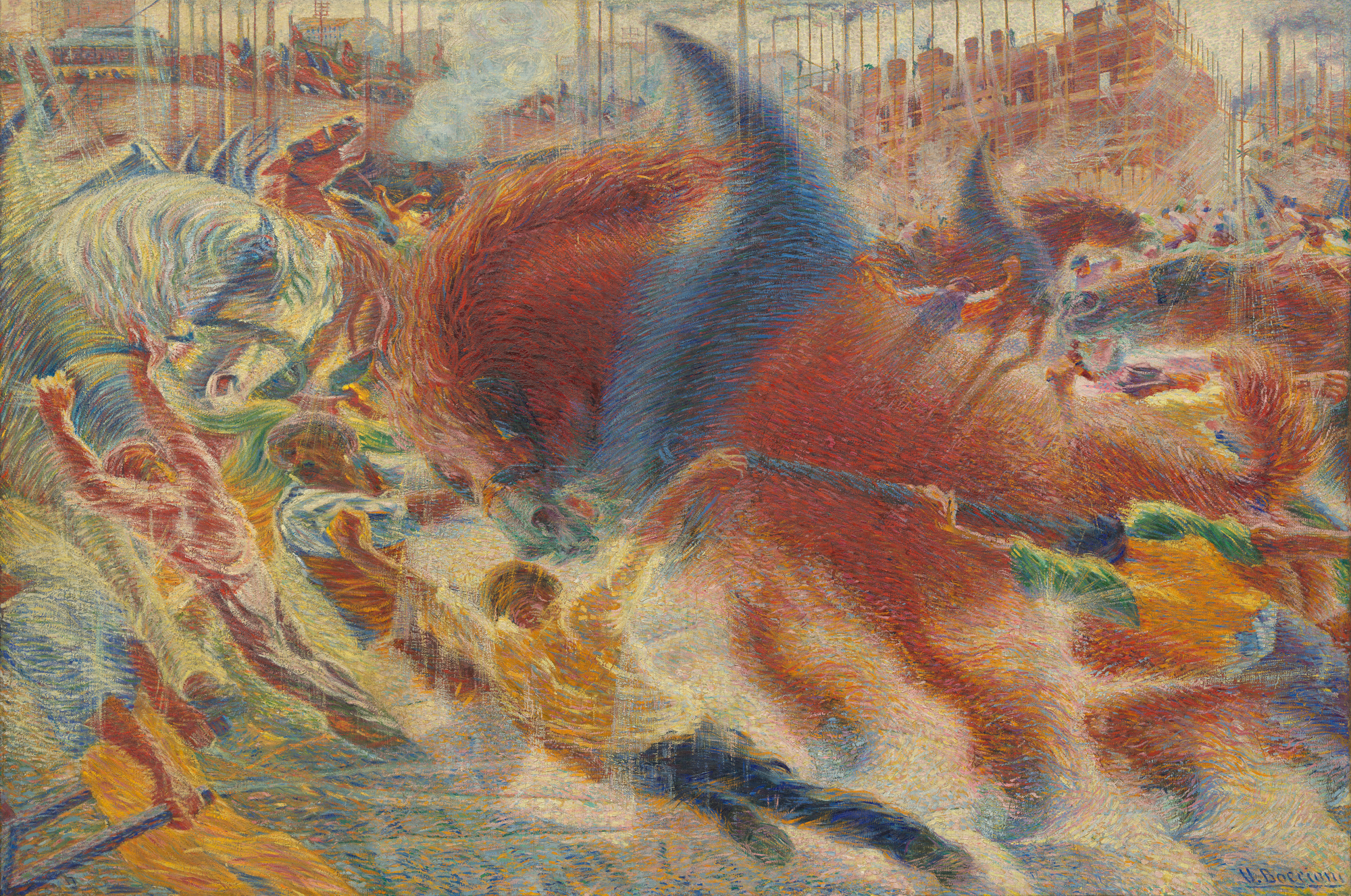 At almost ten feet wide, Umberto Boccioni’s The City Rises projects an image of overwhelming power. Huge workhorses surge across the canvas, their abstracted bodies dissolving into the space and light while their harnesses point upward like wings. Surrounding the enormous beasts, straining workmen in dynamic, elongated postures also partly dissolve into the vibrant, swirling brushstrokes that cover the painting’s surface. Boccioni has turned a construction site into a symbolic image of the powerful forces underlying the modern city.

The painting contains a striking contradiction. It represents the construction site for a new electric power plant on the outskirts of Milan, Italy’s first modern industrial city. In the upper portion of the painting you can see the building under construction, tall smokestacks and, on the left, an electric tram. In the foreground, however, the scene is far from modern in its depiction of the brute power of human and animal labor rather than the power of machines. This contrast between the modern city and the physical labor required to construct it reflects Italy’s somewhat belated industrialization in the early 20th century.

The Futurists were outspoken supporters of Italy’s modernization. Led by the poet Filippo Marinetti, they demanded an end to the idolization of Italy’s dead past and called for the destruction of museums, libraries, and cultural monuments. They glorified modern technology, electricity, steel, and the speed of automobiles, trains, and airplanes. In addition, they promoted an aggressive masculinity and explicitly rejected feminism.

We will sing of great crowds excited by work, by pleasure, and by riot; we will sing of the multicolored, polyphonic tides of revolution in the modern capitals; we will sing of the vibrant nightly fervor of arsenals and shipyards blazing with violent electric moons; greedy railway stations that devour smoke-plumed serpents; factories hung on clouds by the crooked lines of their smoke . . . deep-chested locomotives whose wheels paw the tracks like the hooves of enormous steel horses . . .Filippo Marinetti, “The Foundation and Manifesto of Futurism,” translated by R. W. Flint, reprinted in Art in Theory 1900-2000: An Anthology of Changing Ideas (London: Blackwell, 2003), p. 148. In addition to the roiling forms of the abstracted horses, The City Rises conveys the intense energy of the modern city and its workers by using bright color. The paint is applied using a modified divisionist technique (developed by French 19th-century Post-Impressionists, most notably Georges Seurat), in which small brushstrokes of complementary colors create a bright, flickering surface. There are no shadows; instead, swirls and rays of white paint overwhelm the figures with glowing light.

In keeping with Boccioni’s conception of a universal dynamism uniting all things, the flecks of paint suggest molecules of physical matter constantly changing to form new objects and energy. Nothing appears stable as the composition surges upward. The figures create powerful diagonals rising from right to left in the foreground. A second diagonal rises from left to right in the background, where the scene recedes into cloudy, angled vistas of industrial smokestacks.

The power of the masses

The figures in The City Rises have no faces and do not represent specific individuals. They are part of the city’s crowd, units in a potentially overwhelming force — the new masses of the modern city. The Futurists celebrated the vigor of the urban masses and even tried to incite riot and rebellion by insulting their audiences during aggressive public performances of their poetry and manifestos. We can see this side of the Futurists’ interests in another Boccioni painting, Riot in the Galleria, made while he was working on The City Rises. In terms of subject and location, Riot in the Galleria is almost the polar opposite of The City Rises. Instead of a daytime construction site in the new industrial suburbs, it depicts a nighttime scene in a popular shopping arcade, the Galleria Vittorio Emanuele II, in the heart of Milan’s old city. The people, although equally faceless, are well-dressed and implicitly middle-class. The men wear suits and ties, the women are fashionably attired in bright colors and large fancy hats. Bright orbs of electric light glow in the upper half of the painting and illuminate the crowd outside a glass-fronted cafe.

Our renovated consciousness does not permit us to look upon man as the center of universal life. The suffering of a man is of the same interest to us as the suffering of an electric lamp, which with spasmodic starts, shrieks out the most heart-rending expressions of color. The harmony of the lines and folds of modern dress works upon our sensitiveness . . .”Umberto Boccioni, “Futurist Painting: Technical Manifesto,” Reprinted in Art in Theory 1900-2000, p. 151.

Riot in the Galleria fully demonstrates Boccioni’s claim that light and clothing are as interesting as people. The cause of the riot is unknown. Two women dressed in blue and green fight outside the cafe, while three men struggle together in front of them. A large crowd surges in from the left with their arms raised, while a group of barely individualized figures gestures behind the fighting women. Figures on the periphery run both towards and away from the central group. The scene is depicted from a safe distance, and we look down at the melee as non-involved spectators.

Although a riot is potentially dangerous, the painting is overwhelmingly cheerful with its bright patterns of divisionist colors. The strong verticals of the arcade’s architecture loom over the frenzied crowd in the lower half of the painting, providing a sense of balance, and enhancing our sense of psychological distance.

The scene is exciting without appearing threatening. This rather callous approach to a street brawl reflects the Futurists’ conviction that riot, revolution, and war were cleansing; they would sweep away the failures of the past and renew the world.

A shift in style A slightly later painting of an urban scene, The Street Enters the House, represents a major shift in Boccioni’s style prompted by his exposure to Cubist techniques during a 1911 visit to Paris. The fractured representation of objects and space in Salon Cubism was not only more current than divisionism, it was an effective means to convey the Futurists’ modern concepts of space and time.

Like many of the Salon Cubists, the Futurists were influenced by the philosophy of Henri Bergson as well as by recent scientific discoveries, such as X-rays and Einstein’s new physics. They embraced the concepts of simultaneity and universal dynamism and sought new ways to depict the vital energy of the universe in painting. Boccioni declared that space no longer existed and that he would paint dynamic sensation itself rather than isolated objects. He also promised to put the spectator in the center of the picture. The Street Enters the House is a literal depiction of that promise. It represents a woman in the center of the picture watching men constructing a factory from her balcony. Fractured buildings frame the work site in the center, while a kaleidoscopic array of girders, bricks, and figures thrust upward, surrounding and, in places, penetrating the woman’s body. She leans somewhat precariously over the dizzying view, and we hover even more insecurely just above her. Confronted by the complexity of the scene and the vibrant colors, we are drawn in to psychologically engage with its urban confusion, a very different effect from the distant vantage point of Riot in the Galleria.

Boccioni’s desire to place the spectator in the center of the painting reflects his conception of a reality in which time and space are in constant flux, and that he as an artist intuits the vital forces that flow through all things. By depicting the excitement of rioting crowds, the construction of the new city, and the electricity that powered it, he conveyed his sensitivity to the new forms and energies of the modern world.