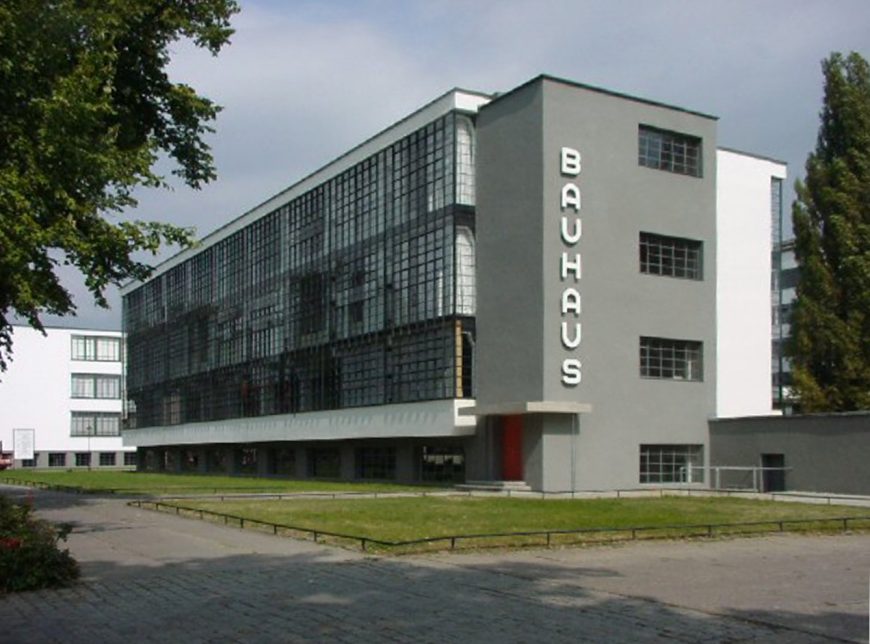 The Bauhaus was an art and design school founded in Germany in 1919. In its early years, the Bauhaus concentrated primarily on hand-made crafts, but it soon became evident that, in order to survive, the school needed to reorient its goals toward industrial production. It therefore underwent a major overhaul in the early 1920s to shift its orientation toward mechanical production. Four chairs by Bauhaus student—and later professor—Marcel Breuer encapsulate the famous design school’s history and changing philosophy in a nutshell.

Made when he was still a student, Breuer’s painted African Chair exemplifies the early, expressionist phase of Bauhaus design. In keeping with the Arts and Crafts creed that hand making is superior to machine making, the carved wood in African Chair is left unplaned to retain a hand-hewn look. Gunta Stölzl, a fellow student in the Bauhaus textile workshop, used the chair frame itself as a loom, weaving the brightly colored geometric patterns of the seat back in place to complete the highly expressive and individualistic piece of furniture.

As its name suggests, African Chair participates in a primitivist aesthetic that was widespread among those seeking an antidote to the ills of urban and industrial life. African art, in particular, inspired many early twentieth-century European modernists, although often, as here in Breuer’s chair, that inspiration is vaguely evocative rather than referring to any specific African cultural tradition.

Breuer produced African Chair under the tutelage of Johannes Itten, the master of the Bauhaus carpentry workshop. The year after it was produced, the Bauhaus turned away from the expressionist aesthetic promoted by Itten and embraced a machine aesthetic. A major influence on this shift was De Stijl co-founder Theo van Doesburg, who came to Germany in 1921 to offer courses on De Stijl principles of design that were attended by many Bauhaus students.

Van Doesburg’s teaching drove the final wedge between two competing schools of thought at the Bauhaus: one, led by Itten, that embraced individualistic, hand-making, spiritual, and expressionist aims; and the other that thought the school should be oriented toward impersonal, rational, industrial manufacture. Bauhaus founder Walter Gropius originally hoped the school could find a middle path, but in a 1922 memorandum he declared that

the world of forms which emerged from and in company with the machine asserts itself … Some Bauhaus students worship a misunderstood “return to nature” à la Rousseau; they want to shoot with bow and arrow rather than with a rifle. But then why not throw stones and go about naked?Cited in Frank Whitford, Bauhaus (London: Thames and Hudson, 1984), p. 120.

Gropius persuaded Itten to resign in 1923, and in his keynote address for the Bauhaus exhibition of that year, declared, “The Bauhaus believes the machine to be our modern medium of design and seeks to come to terms with it.”[1] In practice, this meant adopting a cleaner, more rational geometric aesthetic similar to De Stijl’s reduction of design to its basic elements: horizontal and vertical lines; the primary colors red, yellow, and blue; and the values black and white. Gerrit Rietveld’s Red Blue Chair is a prime example of De Stijl design; all the structural members are oriented on a perfect grid, meeting at 90 degree angles in what are still called “Rietveld Joints.” Only the seat and back are inclined at an angle, because it would be very uncomfortable to sit in a perfectly vertical chair. The chair was originally stained beechwood, but in 1923 Rietveld painted it the iconic primary colors of De Stijl. Breuer’s armchair, designed a year after his African Chair, shows the clear influence of De Stijl. The structural framework is composed entirely of straight horizontal and vertical members meeting at perfect right angles. Like Rietveld, Breuer recognizes the need for some compromise with perfect geometric rationalism where the chair interfaces with the organic human body. The design is softened with a fabric seat that slopes down toward the back, and two slightly offset bands that cradle the lower back and just below the shoulder blades. Although the joinery (mortise-and-tenon, with some lap joints) would be somewhat time-consuming, the wood stock is of an even thickness and width throughout and joins meet exclusively at right angles, making the chair relatively easy to mass produce.

After he graduated, Breuer left the Bauhaus briefly in 1924 to work in Paris, but when the school moved to Dessau he returned to become head of the carpentry workshop. Ironically, at that time he changed materials and began producing furniture using an unabashedly industrial material: tubular steel rather than wood. Breuer’s switch to tube steel was prompted by his admiration for the frame of a bicycle he bought to ride around Dessau. Extruded from a mold, the seamless tubes could be produced in any length needed, then bent around forms into any desired shape. A plumber taught Breuer how to weld the tubes together, and with the Bauhaus weaving workshop to make the fabric, all of the parts came together for what would become Breuer’s signature style. Although it looks complex, Breuer’s first version of the tube steel chair has a simple geometric basis worthy of De Stijl. The arms and legs form the armature of a cube, while the seat and back suggest a second cube nested within, tilted backwards at an ergonomic angle that almost appears to float. As with Breuer’s earlier wood slat chair, within the rigid, rationalized geometric armature, the parts that interface with the human body are made of soft fabric. This is not only ergonomic, it gives an interesting contrast between hard and soft, flexible and rigid, shiny and matte that seems to have come right out of the Bauhaus Vorkurs exercises. Breuer continued to refine the design, and the B33 version of the tube steel chair surprisingly has no back legs. Taking advantage of the strength of the steel, the seat is cantilevered off its front legs (a cantilever occurs when a beam or plane projects beyond its vertical support). There was some dispute about who was responsible for the first cantilevered tubular steel chair. Dutch architect Mart Stam was demonstrably the first to make one, but Breuer claimed he did so after a visit to his studio, during which Breuer showed Stam his ideas for a chair based on a tubular steel table turned on its side.

Breuer had used cantilevers in his furniture design as early as 1922: notice that the arms of his wooden armchair are cantilevered and not supported in front. The cantilevered seat marks the logical conclusion of the tube-steel chair, and is widely acknowledged as a masterpiece of design. The use of a cantilever achieves several things at once. First, it allows the chair to be made of seemingly one single, continuous length of tubing, with just twelve right-angle bends, although cross braces were frequently welded beneath the seat for added rigidity.  This considerably simplifies the manufacturing process in comparison to the much more complicated, multi-part, multi-weld Wassily armchair above.

Second, the cantilever takes advantage of the flexibility of the metal; when someone sits in it, the chair has a slight spring. This not only acts as a shock absorber while sitting (and provides a slight boost when standing up), it also allows the chair to maintain a rigidly rational horizontal-and-vertical form when empty, but provides a slight recline when it is occupied — simultaneously fulfilling the Bauhaus principles of geometric rationalism and ergonomic functionalism.