At first sight the objects in Georges Braque’s Pitcher and Violin appear arbitrarily distorted, but they are not. One tactic that Braque uses here is depicting objects from multiple perspectives. While most of Braque’s violin is depicted frontally, like an illustration in an encyclopedia, the scroll at the top of the neck is represented from the side, and the bridge that holds the strings over the neck and sound board has been flipped up.

The pitcher is also depicted mostly from the side, but we see the top rim from above on the left-hand side, while the spout is depicted from a slightly less elevated angle. Similarly, while Braque appears to have depicted the violin standing improbably on its bottom edge, it is more likely that we are expected to understand it as lying flat on a table. Thus, we are looking down on the violin at the same time as we look straight ahead at the body of the pitcher and the wall behind the table.

This use of multiple perspectives became a hallmark of the Cubist style, but Braque and Picasso never explained why they employed this technique. One common contemporary interpretation argued that the use of multiple perspectives allows greater truth and accuracy than the traditional naturalistic style that had dominated art since the Renaissance. In 1912, the writer and art critic Jacques Rivière argued that linear perspective creates unrealistic distortions. For example, if we stand in the middle of railroad tracks, they appear to converge and meet at a point, when in fact they remain parallel. François Bonvin’s painting of a violin shows how much the instrument is skewed and distorted when viewed in perspective. Parts nearer the viewer are larger than parts further away, and some parts are compressed by foreshortening while others are occluded entirely. Rivière wrote that such distortions are corrected in real life simply by moving around objects to see their true shapes.

A step to the right and a step to the left [can] complete our vision. The knowledge we have of an object is … a complex sum of perceptions … the object must always be presented from the most revealing angle.Jacques Rivière, “Present Tendencies in Painting” (1912), as translated in Edward Fry, ed., Cubism (New York and Toronto: Oxford University Press, 1966), p. 77.

Braque represents the key parts of the violin from the most revealing angle. For example, the scroll is flipped to the side because if viewed from the front like the rest of the violin, it would not be visible at all. At the same time, though, if the scroll were viewed from the side, we would only see two of the tuning pegs, so Braque flips the view again to straight on so that all four pegs are visible.

Perspective is a deliberate lie In 1912, the writer Olivier-Hourcade provided another example of how Cubist paintings correct the distortions of perspective:

The painter, when he has to draw a round cup, knows very well that the opening of the cup is a circle. When he draws an ellipse, therefore, he is not sincere, he is making a concession to the lies of optics and perspective, he is telling a deliberate lie.Olivier-Hourcade, “The Tendency of Contemporary Painting” (1912), as translated in Fry, Cubism, p. 74.

Look at all of the ellipses (flattened circles) in the Heda still-life above: the lip of the glass, the goblet, and the silver pedestal bowl, as well as the two pewter plates and the sliced lemon. All of these shapes are circles in real life; they only appear to be ellipses because of the angle from which they are viewed. The painter can correct this illusion simply by depicting these shapes from straight on, so the circle reveals its true shape. The subject of this still life may be difficult to discern, but with the help of the title we can begin to pick out the represented objects. The clarinet is the white rectangular shape in the left of the painting. Four finger holes extend up its length, which is shaded with chiaroscuro to suggest its tubular volume.

Note that while the bulk of the instrument is seen from the side, the opening at the base in the center of the painting is round, and a semicircle and schematic triangle at the other end by the edge of the canvas suggest the wedge-shaped cut out of the mouthpiece where the reed sits.

Above the clarinet’s finger holes, we can see a wine bottle with schematic, squared-off shoulders. Its transparency is indicated by the fact that we can see the clarinet through it. Notice that here, too, while we see the bulk of the bottle from the side, Braque has rendered the bottle’s mouth as a circle, as though seen from above, while a quarter-circle indicates the round base below.

With familiarity, we can begin to recognize objects in Cubist still-lifes even when they are not explicitly mentioned in the title. In the upper right quadrant of this painting there is a stemmed glass, again seen mostly from the side, but circles at the base, lip, and stem indicate the perfect roundness of those parts.

An art of conception, not perception

Jacques Rivière also argued that monochromatic color and inconsistent lighting are more truthful means to depict reality than traditional naturalism. As the Impressionists had demonstrated, the appearance of objects changes radically in different kinds of light.

Monochromatic color eliminates the variables of lighting to represent objects in their true form, as we know them to be, rather than showing them distorted by our vision. For this reason, Cubism was often seen as an art of conception rather than perception. Cubist paintings represented the composite idea of objects that we have in our heads, rather than rendering objects from one point of view, at one moment in time, and in one kind of light.

Braque and Picasso were well aware of how revolutionary their new way of representing objects was. As if marking the very different approaches to “realism” employed by Cubism and traditional naturalism, Braque painted a nail in the top center of Pitcher and Violin. Although it is rendered in a relatively cursory manner, its darkness and cast shadow make it appear at first sight as though it were a real nail pinning the painting to the wall. Everything in this Harnett still life is painted: the violin, the door, the rusty hinges and nails, the lock, and even the wooden frame. Although this is the style that is usually taken as being the most “realistic,” it is in fact an illusion: it’s only paint on canvas. The use of multiple perspectives to show objects’ true shapes is arguably more true to reality.

The idea of Cubism as a more truthful representation of objects based on the use of multiple perspectives to build up a composite, conceptual representation was one of the dominant interpretations of the movement. It does not, however, fully account for what we see in the works, and it should be remembered that Braque and Picasso did not articulate or endorse this interpretation.

One thing that this interpretation does not account for is what can be called the “background noise” of Cubist paintings. While some shapes in Braque’s Pitcher and Violin and Clarinet and Bottle can be seen as articulating the shapes of those objects from multiple perspectives, others appear to be just arbitrary fragments. Also, as the style of Cubism evolved, Braque and Picasso broke objects up into smaller and smaller facets, until they are virtually unrecognizable in a shallow plane of monochromatic shards. 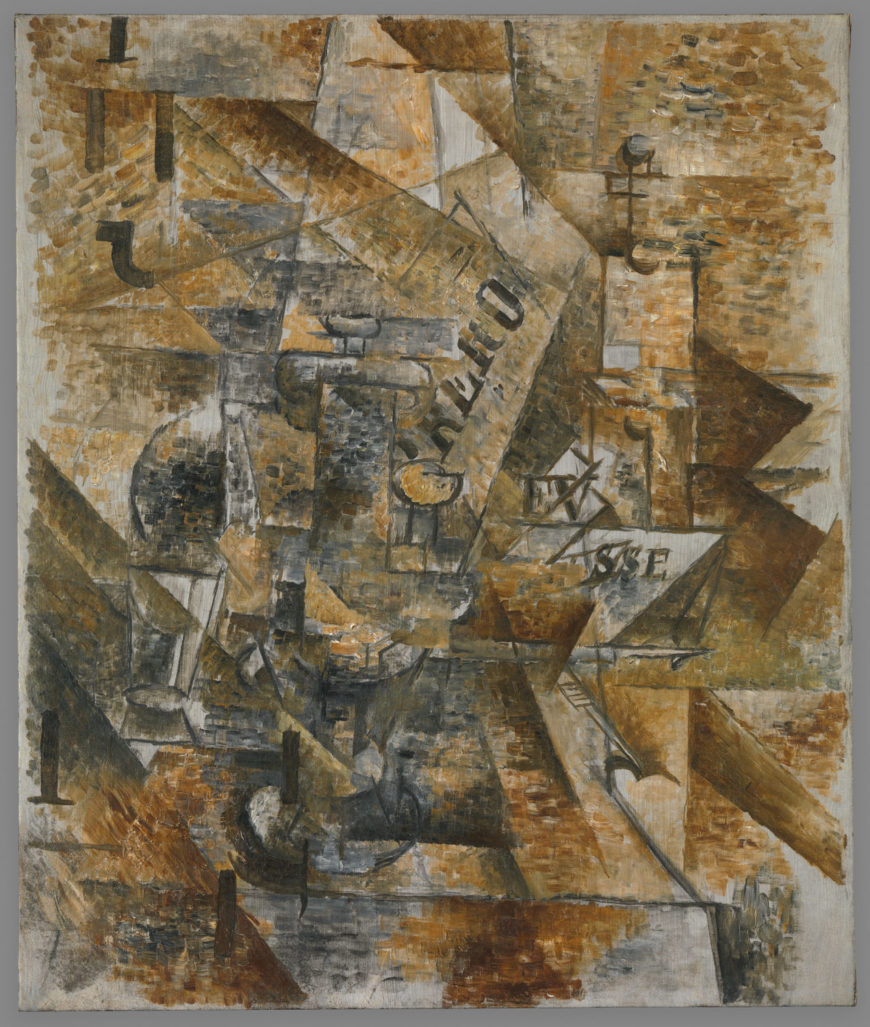 Georges Braque, Still-LIfe with Banderillas, 1911, oil and charcoal with sand on canvas, 65.4 x 54.9 cm (The Metropolitan Museum of Art)

More oddly still, not only are the objects themselves faceted, it appears as though the empty space between them has also been shattered into facets. In some works, paint is applied in an almost brick-like fashion, further contributing to the background noise, until only a few clues (and the titles) hint at what is being represented.

To each object they add the distance which separates it from neighboring objects … and in this way they show it prolonged in all directions and armed with incomprehensible fins. The intervals between forms—all the empty parts of the picture, all the places in it occupied by nothing but air, find themselves filled up by a system of walls and fortifications.Jacques Rivière, “Present Tendencies in Painting” (1912), as translated in Edward Fry, ed., Cubism, p. 79.

Although this is a fairly accurate description of late Cubist painting, Rivière was unable to explain its motivations and claimed that these were “mistakes.” His highly rational view of Cubism led him to dismiss the elements of the style that did not conform to his ideas. Rivière’s “multiple perspectives as higher truth” interpretation is compelling, and as we have seen backed by some visual evidence, but there are clearly other facets to Picasso’s and Braque’s Cubism.