A New Freedom for Art

Imagine yourself walking down the street in Vienna and coming across the Secession Building. It’s oddness would likely stop you in your tracks. It certainly looks like nothing else around it—no school, no church, no government building. It’s gleaming white walls, lack of windows, gilded inscriptions and strange floating sphere of golden leaves looks like a temple built by some secretive, mythic people who long ago disappeared. Architect Josef Maria Olbrich’s building perfectly expressed the aim of the group for whom it was built, the Vienna Secession: to set themselves apart, to shock and put forward a new form of beauty, something at once profoundly modern and as old as human nature. The Secession— a term meaning “to break away”—formed in April of 1897 when a number of members within the Association of Austrian Artists departed in frustration. These artists, architects, and designers had grown tired of nineteenth-century ideals and beliefs such as historicism (the constant reference to the past in art), positivism (a focus on that which can be rationally or scientifically proven), realism (a focus on art that creates an illusion of reality), and the commercialism of art  (the idea that artists were working strictly for profit, rather than a more noble calling). The Secession referred to the Union of Austrian Fine Artists (Vereinigung Bildender Künstler Österreichs). Painter Gustav Klimt was nominated as President and original members included architect Josef Hoffmann and designer Kolomon Moser. The central credo of the Secession was emblazoned in gold above the doorway: “Der Zeit ihre Kunst/Der Kunst ihre Freiheit” (To Each Age its Art/To Art its Freedom). With this rallying cry the group made clear that it was the task of artists of each new generation to find their own language and subjects to express the moment in which they lived, rather than to constantly recycle the past. Throughout the nineteenth century, architects like Charles Garnier had created historicist buildings which drew upon both classical and baroque styles; the members of the Secession saw this as inherently dishonest. For them, art stood above politics, above commerce, and above ideology.

Olbrich’s Secession building was the site for all the exhibitions of this group, beginning in October of 1898. Rather than nodding to periods or styles glorified in the nineteenth century, such as the High Renaissance or classicism, the building evokes other styles, including those of archaic Greece (as opposed to the art of the classical period) a style embraced in Klimt’s Beethoven Frieze in the interior) as well as other Mediterranean civilizations like ancient Egypt. The stretch of flat walls, made of plaster covered in whitewash, recalled the city walls and friezes of ancient Assyrian and Egyptian palaces and the strange proportions of Olbrich’s building include distant echoes of pylons (the gateway of ancient Egyptian temples). The forms of Western architecture—columns, arches, sloping roofs— are nowhere to be found. Many commentators of the time found the open metal work sphere at the top, composed of 3,000 golden leaves, and recalling both laurel-leaf crowns and the thinly hammered gold jewelry of ancient Mediterranean, to be the strangest of all. The weirdness of the building earned it some memorable nicknames in its time including “Mahti’s tomb” and “The Golden Cabbage.” In addition to their rallying cry, the name of the group’s journal, Ver Sacrum (Sacred Spring), is written on the building. Like the title, the three Greek gorgon masks that hover above the doorway evoke the world of archaic Greek art. The play of austerity against elements of decoration, like the stylized trees with gilded leaves is characteristic of the style of many artists within the early Secession, in media including architecture, ceramics, jewelry, painting and the graphic arts. Inside the building, the innovative architecture continued. It was the first exhibition space designed with movable walls to accommodate different types of work. Beginning in 1898, the Secession held annual exhibits where the most innovative art, not only in Vienna, but throughout Europe, was put on display. It was one of the only spaces within Austria where artists could see a full range of the European avant garde including the work of artists like Honorary Secession members Fernand Khnopff, Edward Burne-Jones, and August Rodin. In addition to Klimt, Secession artists such as Hoffmann, Moser, and Otto Wagner would form the heart of Viennese Modernism in the arts and architecture. Perhaps the most famous of the Secession exhibits was the XIVth one, in 1902, devoted to the German composer Beethoven.

The entire building was turned over in tribute to him, with a sculpture by Max Klinger and Klimt’s enigmatic Beethoven Frieze painted around the upper walls of one gallery. The work was inspired by Beethoven’s Ninth Symphony, played by Gustav Mahler at the opening of the exhibition, creating a Gesamtkunstwerk, a total work of art—inspired by composer Richard Wagner’s concept where many art forms combine to express a unified vision. A bridge between the old and the new

The work of the Secessionists was innovative and scandalous in its formal experimentation, for example in Moser’s woodcut for an 1899 cover of Ver Sacrum, with its non-naturalistic colors, flatness, surface design (as in the closely related Jugendstil), and simplified, bold drawing, at once elegant and powerful. It was also shocking in the way it dealt with new subjects and modern life in ways that were utterly shocking to the staid denizens of Viennese society; Gustav Klimt’s Hope I  juxtaposed a nude, very pregnant woman with visible pubic hair, against symbols of death and decay.

While some of the twentieth century’s greatest minds (including Sigmund Freud, Ludwig Wittgenstein, and Arnold Schoenberg), were already at work in the city, Vienna was still the crown jewel of the vast Austro-Hungarian Empire, which had been ruled for decades by Emperor Franz Josef. Writer Stephen Zweig captured the conservative nature of this culture when he noted that at twenty years, a man would know exactly what his life would be like at fifty. Into this stiff world of imperial pomp, elaborate waltzes and tight corsets, the members of the Secession displayed images of frank sexual desire, psychological fears, and morbid fantasies. For example, one of the most common motifs of Secession members was the femme fatale, the deadly seductive woman who reigns in the works of Klimt, Felicien Rops, Ferdinand Khnopff and others.

In many ways, the art produced during the early Secession, like Olbrich’s building, is a bridge between nineteenth-century Academic art and the abstraction that would come in the twentieth. Academic art refers to the manner and style taught in the European art academies of the late eighteenth and nineteenth centuries, rooted in the classical art of Greece and Rome. Works produced in the academies were highly finished, naturalistic, and greatly idealized, like Frederic Leighton’s Bath of Psyche, painted for the British Royal Academy. The enticing, languid figures of the early Secession hark back to Academic ideals of beauty, but begin to abandon the traditional, illusionistic language passed down from the Renaissance.

The work of the Secessionists was often still tied to nineteenth-century ideas of beauty and sophistication, in contrast to the artistic movements that would emerge in the second decade of the twentieth century, like the Futurists or Die Brücke. For all its oddity, Olbrich’s building, like the art of the Secession, makes no reference to the world of industry, machinery, or mass culture. Like Art Nouveau and Symbolism, to which it is connected, it is deeply escapist at its heart.

Even the Secession itself proved too restrictive, and in 1905 a group led by Klimt and including Moser and Hoffmann (the later two had formed the Wiener Werkstätte, or Viennese Workshops, in 1903) broke away, wishing to pursue a more complete intertwining of the visual and decorative arts. At the same, a group of women artists, such as Broncia Koller-Pinell and designer Fanny Harlfinger-Zakucka (excluded from joining the all-male group), pursued parallel innovations and practices, forming a kind of “Female Secession” whose achievements have until recently largely been lost to history. Their multifaceted achievements in the fine and decorative arts are only now being recognized, changing our understanding of the wider artistic landscape in Vienna. [1] 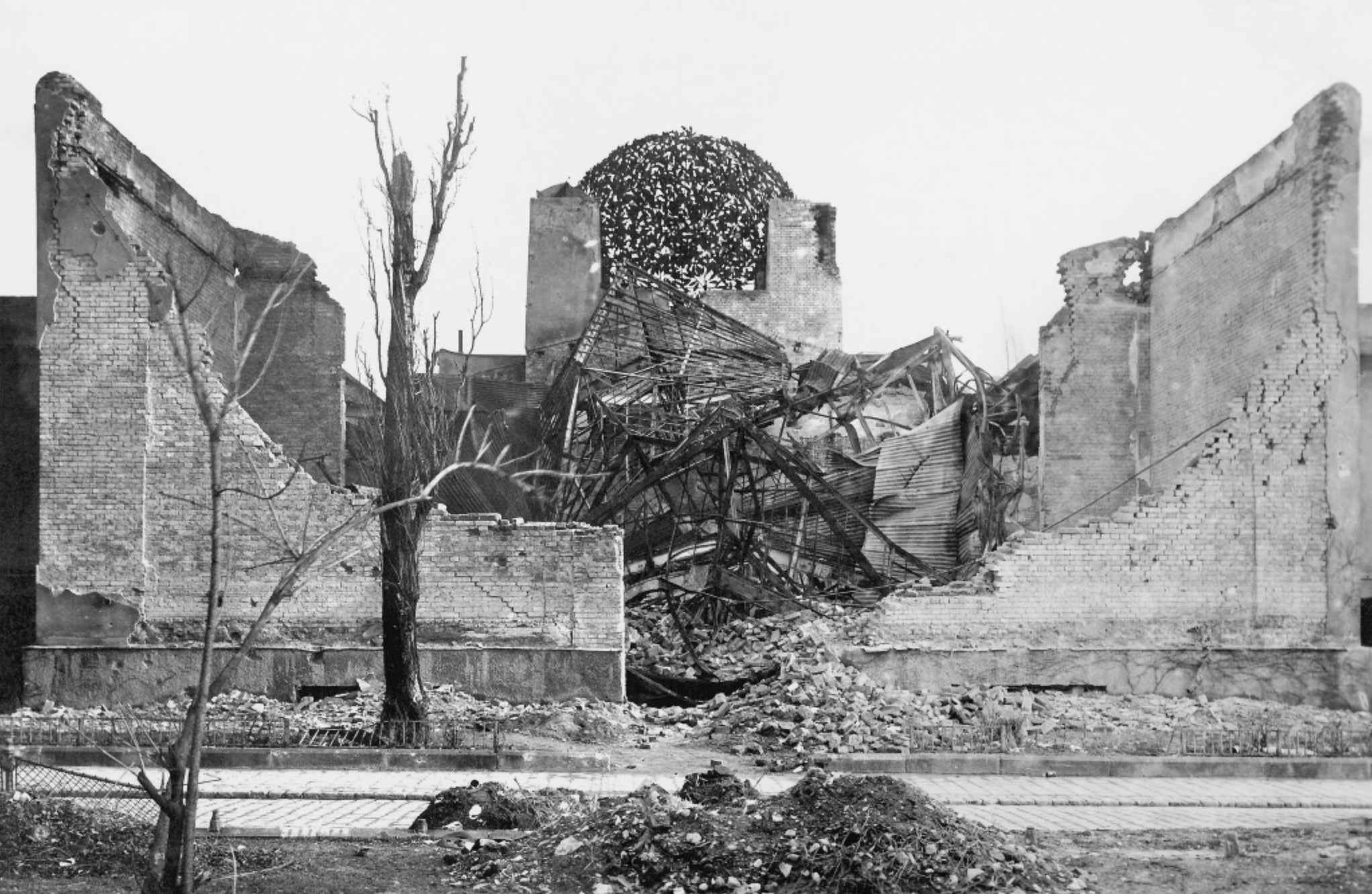 The currents of history

Both the Secession building and its exhibitions were under the control of the Nazi cultural offices after the Anschluss (the annexation of Austria into the Third Reich from 1938 to 1945). In February of 1945 an allied bomb landed squarely on the building, shattering the glass dome and destroying large parts of the structure. The current building is largely a reconstruction. Despite the Secessionists’ fervent desire for art to maintain its freedom, their works, like all art, can never be detached entirely from the larger currents of history.

360 view of the Klimt’s Beethoven Frieze