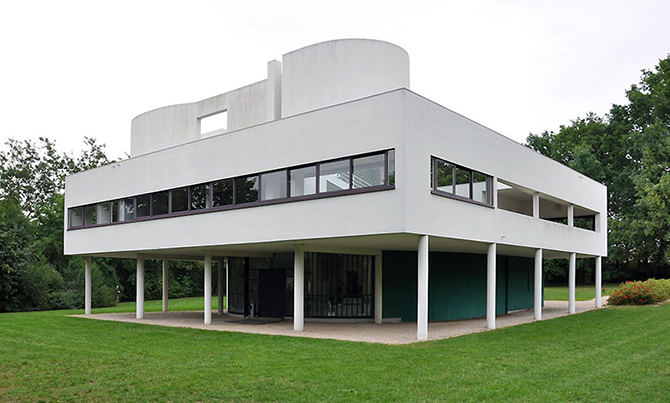 In Latin America, the International Style of architecture flourished in the mid-twentieth century, replacing the classicism of the previous decades. Countries with booming economies and nation-building efforts embraced international abstraction as an alternative to indigenism. The International Style is a general term that refers to modern architecture often stripped of ornamentation to reveal the beauty of its structural form. Designs are often use reinforced concrete and brise soleil walls. As exemplified by the Swiss architect Le Corbusier, the International Style consisted of a functional style of architecture, through which purpose dictates form. Devoid of ornament, the exterior of many of these buildings feature geometric design, modular units, and clean lines. The style transformed Latin American cities, like Mexico City and Brasília, into modern metropoles.

The International Style in Mexico City

In Mexico, Juan O’Gorman designed housing projects to accommodate the rapid urbanization of Mexico City, as well as private residences, among them the house and studio of the artists Diego Rivera and Frida Kahlo. The large windows and the modular units of square panels of glass are typical characteristics of the International Style, not to mention highly functional in the context of artists’ studios. An important feature of the house was the rooftop bridge, which connected the larger red house that belonged to Rivera with the smaller blue house that belonged to Kahlo (and refers to La Casa Azul, “The Blue House,” in which she grew up in Coyoacán). The horizontality of the bridge railings, which paralleled that of the window panes, was a typical feature of the International Style, as were the supporting pilotis (or piers) on the ground floor, which elevated the house and provided parking space, as exemplified in the Villa Savoye (1931) by Le Corbusier.

The population of Mexico City grew rapidly between 1940 to 1960,  increasing from 1.7 million to 5.4 million people. In order to accommodate this exploding population, housing developments, such as Satellite City, sprouted up throughout Mexico City. Designed by Mario Pani, who also designed the campus of the National Autonomous University of Mexico (UNAM), this self-sufficient urban enclave catered primarily to the middle class.

At the entrance to the city, the German émigré artist Mathias Goeritz and the Mexican architect Luis Barragán created The Towers of Satellite City, a work that “would mark the origin point of Mexico City’s mid-century middle-class expansion to the north.”[1] The monument consists of five wedge-shaped structures that rise more than 100 feet, and they demonstrate the artists’ abandonment of figuration. Varying in height, placement, and shape, they recreate an urban landscape through which their spatial relation with the viewer changes according to movement, an effect that is further dramatized by passing drivers. Goeritz further elaborated on the importance of abstraction in civic architecture in his “Emotional Nature” manifesto, in which he called for “a spiritual uplifting” in architecture. View of the civic center of Brasília, Brazil (photo: Jason Rosenberg, CC BY 2.0)

Perhaps the greatest monuments of the International Style in Latin America can be seen in Brasília. The capital city of modern-day Brazil was created between 1956 and 1960 by the famed Brazilian architect Oscar Niemeyer. Niemeyer first met Le Corbusier in 1929, when the French architect traveled to Rio de Janeiro as part of his first trip to South America, which also included visits to Argentina and Uruguay.

Transforming the horizontals and verticals of Le Corbusier into sweeping curves and spires, Niemeyer articulated a unique and modern architectural vision for Brazil. This was partly due to the influence of his mentor, Lúcio Costa, who advocated for a synthesis of Modernism and Brasilidade (“Brazilian-ness”), a “tropical modernism,” that presented a view of an industrially modern, yet exotic country. Like the Mexican Muralists, Niemeyer was empowered by the government, who showered him with commissions for architectural projects in emerging cities like Pampulha and Brasília. Pampulha was established as a resort community near a lake of the same name. Pampulha served as the vacation destination for residents of the surrounding city of Belo Horizonte and of Brasília. Among the many buildings designed by Niemeyer, the Church of Saint Francis of Assisi demonstrates his iconic use of curves, made possible through reinforced concrete. Niemeyer was building the curvilinear forms that characterized the Brazilian Baroque style from centuries earlier—particularly the work of Antonio Francisco Lisboa, who designed the Church of São Francisco de Assis in Ouro Prêto. The curves also echo the topography of Brazil, and Niemeyer dramatized his structure further by having the entire church plan consist of a single vaulted nave. This provides an intimate atmosphere for worship. It also prevents the interruption of form between wall and ceiling. Still, some residents of Pampulha resented the simplicity of Niemeyer’s design. Candido Portinari, on the other hand, who created murals based on the life of Saint Francis for both the interior and exterior of the church, benefitted from Niemeyer’s curved design, which provided an ideal surface for his murals.

Literally built from scratch, Brasília was to showcase the modernity of a newly industrialized country, as encapsulated by its slogan “fifty years of progress in five.” The urban planning was entrusted to Lúcio Costa, while the development of government, religious, and domestic buildings was assigned to Niemeyer. Costa’s design, called the Pilot Plan, separated civic spaces from those meant for residential living. The civic spaces are arranged on an “x” axis, while blocks of housing units for 500,000 people were constructed on a “y” axis for the city. At the civic center, known as the Plaza of the Three Powers, Niemeyer situated the legislative, executive, and judicial buildings in close proximity to one another. The National Congress, which houses the legislative branch, consisted of a one-story structure topped with two opposing half-circles, a dome, which marked the Senate, and a bowl, the Chamber of Deputies. While the horizontality of the National Congress contrasts with the curvature of the bowl and the dome, it also intersects with the verticality of the two administrative buildings, prominently placed behind it. A powerful play on shape and line, Niemeyer further dramatizes the layout by adding ramps onto which visitors can approach the dome and bowl not only at street level, but also from the rooftop.