The Evolution of Cubism

Beginning in 1908, and continuing through the first few months of 1912, Braque and Picasso co-invent the first phase of Cubism. Since it is dominated by the analysis of form, this first stage is usually referred to as Analytic Cubism. But then during the summer of 1912, Braque leaves Paris to take a holiday in Provence. During his time there, he wanders into a hardware store, and there he finds a roll of oil cloth. Oil cloth is an early version of contact paper, the vinyl adhesive used to line the shelves or drawers in a cupboard. Then, as now, these materials come in a variety of pre-printed patterns.

Braque purchased some oil cloth printed with a fake wood grain. That particular pattern drew his attention because he was at work on a Cubist drawing of a guitar, and he was about to render the grain of the wood in pencil. Instead, he cut the oil cloth and pasted a piece of the factory-printed grain pattern right into his drawing. With this collage, Braque changed the direction of art for the next ninety years.

As you might expect, Picasso was not far behind Braque. Picasso immediately begins to create collage with oil cloth as well—and adds other elements to the mix (but remember, it was really Braque who introduced collage—he never gets enough credit). So what is the big deal? Oil cloth, collage, wood grain patterns—what does this have to do with art and Cubism? One of the keys to understanding the importance of Cubism, of Picasso and Braque, is to consider their actions and how unusual they were for the time. When Braque, and then Picasso placed industrially-produced objects (“low” commercial culture) into the realm of fine art (“high” culture) they acted as artistic iconoclasts (“icon”=image/”clast”=destroyer).

Moreover, they questioned the elitism of the art world, which had always dictated the separation of common, everyday experience from the rarefied, contemplative realm of artistic creation. Of equal importance, their work highlighted—and separated—the role of technical skill from art-making. Braque and Picasso introduced a “fake” element on purpose, not to mislead or fool their audience, but rather to force a discussion of art and craft, of high and low, of unique and mass-produced objects. They ask: “Can this object still be art if I don’t actually render its forms myself, if the quality of the art is no longer directly tied to my technical skills or level of craftsmanship?” 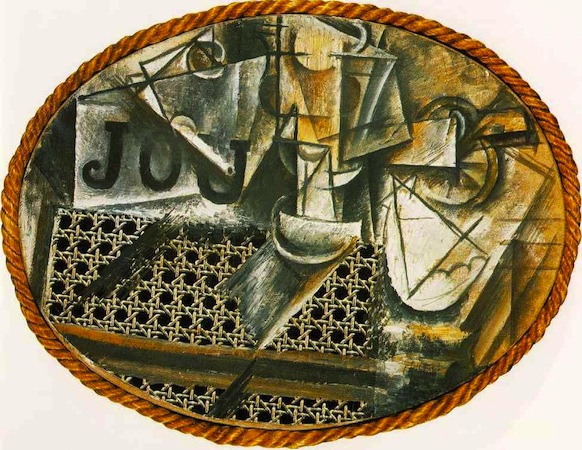 Virtually all avant-garde art of the second half of the twentieth century is indebted to this brave renunciation. But that doesn’t make this kind of Cubism, often called Synthetic Cubism (piecing together, or synthesis of form), any easier to interpret. At first glance, Picasso’s Still-Life with Chair Caning of 1912 might seem a mish-mash of forms instead of clear picture. But we can understand the image—and other like it—by breaking down Cubist pictorial language into parts. Let’s start at the upper right: almost at the edge of the canvas (at two o’clock) there is the handle of a knife. Follow it to the left to find the blade. The knife cuts a piece of citrus fruit. You can make out the rind and the segments of the slice at the bottom right corner of the blade.

Below the fruit, which is probably a lemon, is the white, scalloped edge of a napkin. To the left of these things and standing vertically in the top center of the canvas (twelve o’clock) is a wine glass. It’s hard to see at first, so look carefully. Just at the top edge of the chair caning is the glass’s base, above it is the stem (thicker than you might expect), and then the bowl of the glass. It is difficult to find the forms you would expect because Picasso depicts the glass from more than one angle. At eleven o’clock is the famous “JOU,” which means “game” in French, but also the first three letters of the French word for newspaper (or more literally, “daily”; journal=daily). In fact, you can make out the bulk of the folded paper quite clearly. Don’t be confused by the pipe that lays across the newspaper. Do you see its stem and bowl?

Looking Down and Looking Through

But there are still big questions: why the chair caning, what is the gray diagonal at the bottom of the glass, and why the rope frame? (Think of a ship’s port hole. The port hole reference is an important clue.) Also, why don’t the letters sit better on the newspaper? Finally, why is the canvas oval? It has already been determined that this still life is composed of a sliced lemon, a glass, newspaper, and a pipe. Perhaps this is a breakfast setting, with a citron pressé (French lemonade). In any case, these items are arranged upon a glass tabletop. You can see the reflection of the glass. In fact, the glass allows us to see below the table’s surface, which is how we see the chair caning—which represents the seat tucked in below the table.

Okay, so far so good. But why is the table elliptical in shape? This appears to be a café table, which are round or square but never oval. Yet, when we look at a circular table, we never see it from directly above. Instead, we see it at an angle, and it appears elliptical in shape as we approach the table to sit down. But what about the rope, which was not mass-produced, nor made by Picasso, but rather something made especially for this painting? We can view it as the bumper of a table, as it was used in some cafés, or as the frame of a ship’s port hole, which we can look “through,” to see the objects represented. The rope’s simultaneous horizontal and vertical orientation creates a way for the viewer (us) to read the image in two ways—looking down and looking through/across. Put simply, Picasso wants us to remember that the painting is something different from that which it represents. Or as Gertrude Stein said, “A rose is a rose is a rose.”