“The house is a box in the air,…”
—Le Corbusier, Précisions 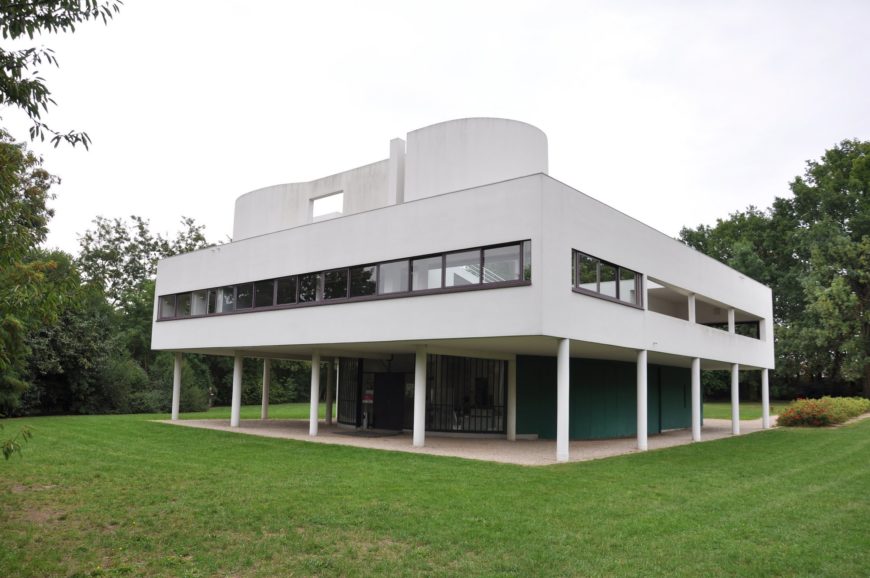 The Villa Savoye at Poissy, designed by Le Corbusier in 1929, represents the culmination of a decade during which the architect worked to articulate the essence of modern architecture. Throughout the 1920s, via his writings and designs, Le Corbusier (formerly Charles-Edouard Jeanneret) considered the nature of modern life and architecture’s role in the new machine age. His famous dictum, that “The house should be a machine for living in,” is perfectly realized within the forms, layout, materials, and siting of the Villa Savoye.

Located just outside Paris, the Villa Savoye offered an escape from the crowded city for its wealthy patrons. Its location on a large unrestricted site allowed Le Corbusier total creative freedom. The delicate floating box that he designed is both functional house and modernist sculpture, elegantly melding form and function. Le Corbusier had been developing his theories on modern architecture throughout the previous decade. In 1920, he founded the journal L’Esprit Nouveau, and many of the essays he published there would eventually be incorporated into his landmark collection of essays, Vers une architecture (Toward an Architecture) in 1923. This book celebrated science, technology, and reason, arguing that modern machines could create highly precise objects not unlike the ideal platonic forms valued by the ancient Greeks. Le Corbusier lavished praise on the totems of modernity—race cars, airplanes, and factories—marveling at the beauty of their efficiency. However, he also argued that beauty lay not only in the newest technology but in ancient works such as the Parthenon, whose refined forms represented, in his view, the perfection of earlier Archaic systems. Le Corbusier sought to isolate what he called type forms, which were universal elements of design that can work together in a system. He found these across time and across the globe, in the fields of architecture and engineering. The many images embedded throughout the text drew striking visual parallels and eloquently expressed his search for modern perfection through universal forms. During the 1920s, Le Corbusier designed a series of houses (above) which allowed him to develop his ideas further. By 1926, he had devised his Five Points of Architecture, which he viewed as a universal system that could be applied to any architectural site. The system demanded pilotis (slender columns) to raise the building off the ground and allow air to circulate beneath; roof terraces, to bring nature into an urban setting; a free plan that allowed interior space to be distributed at will; a free façade whose smooth plane could be used for formal experimentation; and ribbon windows, which let in light but also reinforced the planarity of the wall.

The Villa Savoye incorporated these principles, and also realized many of the concepts expressed in Vers une Architecture. Made of reinforced concrete, the ground floor walls are recessed and painted green so that the house looks like a box floating on delicate pilotis. Visitors arrive by car, in true machine-age fashion. The stark white exterior wall, with its strips of ribbon windows, has a remarkably smooth, planar quality. This stands in contrast to the fluidity of the interior, which is organized by a multistory ramp that leads the viewer on a gently curving path through a building that is nearly square. The contrast between the sharp angles of the plan and the dynamism of the spaces inside charge the house with a subtle energy. The ramp winds from the entrance up to the salon, a formal interior space that flows seamlessly into the roof terrace outside. Corbu, as he is also known, treated the terrace as a room without walls, reflecting his desire to fully integrate landscape and architecture. The ramp finally culminates in the curved solarium crowning the house, whose rounded enclosure appears to be an abstract sculpture when viewed from below. Seen from the roof terrace, the ramp and cylinder of the solarium echo the forms of the ocean liners lauded in Vers une Architecture.  Le Corbusier and Madame Savoye believed in the health benefits of fresh air and sunshine, and considered leisure time spent outdoors one mark of a modern lifestyle. The Villa Savoye’s integration of indoor and outdoor spaces allowed the family to spend time outdoors in the most efficient way possible—the house was, in a sense, a machine designed to maximize leisure in the machine age. The Villa Savoye can be understood as Le Corbusier’s refinement of his architectural system, his own personal Parthenon. Its essential geometric volumes embody his concept of the type form, and its careful consideration of procession and proportion connect the building to Classical ideals. At the same time, its clean simplicity and its use of concrete evoke the precisely-calibrated works of engineering so admired by the architect. The Villa Savoye represents Le Corbusier’s re-conception of the very nature of architecture, his attempt to express a timeless classicism through the language of architectural modernism.

Model at The Museum of Modern Art