Walking up to Piet Mondrian’s painting, Composition with Red, Blue, and Yellow can be a baffling experience (see image at left). The canvas is small and uses only the simplest of colors: red, blue, yellow, white and black. The composition is similarly reduced to the simplest of rectilinear forms, squares and rectangles defined by vertical and horizontal lines. One would hardly suspect that we are seeing the artist’s determination to depict the underlying structure of reality.

Mondrian called his style Neo-Plasticism or “The New Plastic Painting,” the title of his famous 1917 essay promoting abstraction for the expression of modern life. Don’t be confused by Mondrian’s use of the term “plastic.” He uses it to refer to the plastic arts—media such as sculpture, that molds three-dimensional form, or, in Mondrian’s case, painting on canvas. For centuries, European painters had attempted to render three-dimensional forms in believable spaces—creating convincing illusions of reality (click here for an example—Vermeer’s Young Woman with a Water Pitcher). In contrast, Mondrian and other modernists wanted to move painting beyond naturalistic depiction to focus instead on the material properties of paint and its unique ability to express ideas abstractly using formal elements such as line and color.

Mondrian believed his abstraction could serve as a universal pictorial language representing the dynamic, evolutionary forces that govern nature and human experience. In fact, he believed that abstraction provides a truer picture of reality than illusionistic depictions of objects in the visible world. Perhaps this is why Mondrian characterized his style as “abstract real” painting.

Mondrian’s earliest paintings were quite traditional in both subject and style. He studied at the art academies in the Hague and in Amsterdam in his home country of the Netherlands. Then, as with many artists during the early twentieth century, he began to emulate a variety of contemporary styles, including Impressionism, Neo-Impressionism, and Symbolism in an effort to find his own artistic voice. The impact of these modern movements can be seen in the development of Mondrian’s painting which, over time, shows the dissolution of recognizable objects into increasingly pared-down structures (see the three depictions of trees below). His emphasis on line, color, and geometric shape sought to highlight formal characteristics.

Mondrian was inspired by Cubism, a movement led by Pablo Picasso and Georges Braque that explored the use of multiple perspectives. Mondrian began experimenting with abstracted forms around the time he moved to Paris in 1912. His famous “Pier and Ocean” series (see above), which reduces the landscape to arrangements of vertical and horizontal lines, exemplifies this period in Mondrian’s career. He wanted to push beyond Cubism’s strategy of fragmenting forms (café tables were a favorite subject), and move toward pure abstraction. However, this change in Mondrian’s process did not take place overnight and he continued to work in a studied, methodical way. In fact, his production of paintings within a series of canvases was part of Mondrian’s method, and how he worked through thematic and compositional issues. Because Mondrian continued to rely on the series throughout his career, we can see the progression of his pictorial language even in his later, purely abstract work. 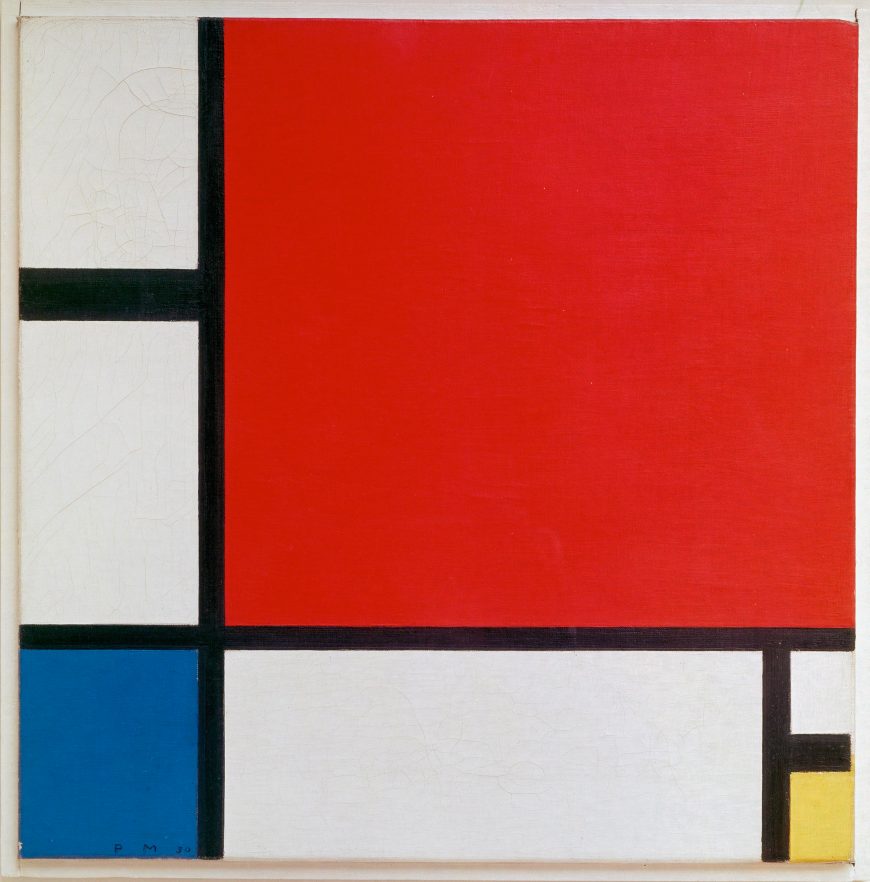 His use of the term “composition” (the organization of forms on the canvas) signals his experimentation with abstract arrangements. Mondrian had returned home to the Netherlands just prior to the outbreak of the First World War and would remain there until the war ended. While in the Netherlands he further developed his style, ruling out compositions that were either too static or too dynamic, concluding that asymmetrical arrangements of geometric (rather than organic) shapes in primary (rather than secondary) colors best represent universal forces. Moreover, he combined his development of an abstract style with his interest in philosophy, spirituality, and his belief that the evolution of abstraction was a sign of humanity’s progress. Some art historians have viewed Mondrian’s painting as an expression of his interest in dialectical relationships, ideas advanced by the early nineteenth-century German philosopher Hegel that art and civilization progress by successive moments of tension and reconciliation between oppositional forces. For Mondrian then, composing with opposites such as black and white pigments or vertical and horizontal lines suggest an evolutionary development.

Mondrian’s painting may also reflect his association with the Theosophical Society, an esoteric group that had a strong presence in Europe. Theosophists were interested in opposites as an expression of hidden unity. During WWI, Mondrian stayed in Laren, a village with a thriving art community near Amsterdam. He lived near M.H.J. Schoenmaeker, a prominent Theosophist who used terms such as “New Plastic” to promote his ideas on spiritual evolution and the unification of the real and the ideal, the physical and immaterial. In Theosophy, lines, shapes, and colors symbolized the unity of spiritual and natural forces.

While in Holland, Mondrian founded the movement called De Stijl (The Style) with the artist Theo van Doesburg. The two shared many ideas about art as an expression of relationships, particularly the relationships between art and life. Because these artists believed that the evolution of art coincided with the modern progression of humankind, they thought that New Plasticism could, and should, encompass all of human experience. Van Doesburg founded the journal De Stijl  to promote these ideas and demonstrate that their geometric abstraction, based on their theory of spiritual and pictorial progress, could form a total environment, and impact modern life. Although Mondrian and van Doesburg eventually parted ways, their movement to combine modern art and living was so influential that the abstract, geometric principles and use of primary colors they applied in painting, sculpture, design, and architecture still resonate today.

Mondrian’s Composition with Red, Blue, and Yellow demonstrates his commitment to relational opposites, asymmetry, and pure planes of color. Mondrian composed this painting as a harmony of contrasts that signify both balance and the tension of dynamic forces. Mondrian viewed his black lines not as outlines but as planes of pigment in their own right; an idea seen in the horizontal black plane on the lower right of the painting that stops just short of the canvas edge (see image above). Mondrian eradicates the entire notion of illusionistic depth predicated on a figure in front of a background. He achieves a harmonious tension by his asymmetrical placement of primary colors that balance the blocks of white paint. Notice how the large red square at the upper right, which might otherwise dominate the composition, is balanced by the small blue square at the bottom left. What’s more, when you see this painting in a person you can discern just how much variation is possible using this color scheme—and that Mondrian used varying shades of blacks and whites, some of which are subtly lighter or darker. Seen up close, this variety of values and textures create a surprising harmony of contrasts. Even the visible traces of the artist’s brushwork counter what might otherwise be a rigid geometric composition and balance the artist’s desire for a universal truth with the intimately personal experience of the artist.