Although they were conceived more than a century ago, readymades continue to challenge and confound. The term was coined by Dada artist Marcel Duchamp to describe ordinary, prefabricated objects selected by an artist and presented as art. Sometimes the object is altered, such as by combining it with another object to make an “assisted readymade.’” The first readymade consisted of a bicycle wheel mounted upside-down on the seat of a stool. What are we to make of such an object? Why does it qualify as a work of art? Is any object a potential readymade? Can anyone make one? For his most notorious readymade, Duchamp took an ordinary men’s urinal, flipped it ninety degrees, titled it Fountain, and submitted it to an art exhibition under the pseudonym “R. Mutt.” Although the exhibition was non-juried, meaning that it would theoretically accept any submitted work, Fountain was rejected, and Duchamp published a defense of it:

Whether Mr. Mutt with his own hands made the fountain or not has no importance. He CHOSE it. He took an ordinary article of life, and placed it so that its useful significance disappeared under the new title and point of view — created a new thought for that object.Marcel Duchamp (anonymously), “The Richard Mutt Case,” in The Blind Man, no. 2 (May 1917), n.p.

Duchamp here notes several points of intervention by the artist that make even a “pure” readymade like Fountain different from an ordinary object:

(1) The readymade is chosen by the artist. Different objects have different associations and significance; an airplane propeller signifies something different than a high-heeled shoe. Readymades do not display an artist’s technical skill, but a work of art based on choosing an object, rather than representing one, does not necessarily sacrifice a capacity for meaningful communication.

(2) The readymade is divorced from its ordinary context and use value, and re-presented in an art world context. This encourages us to encounter the object in a different way. A urinal encountered in a men’s restroom is a simple matter of utilitarian fact; one encountered in a gallery becomes a focus for observation, cogitation, discussion, appreciation, and/or denunciation.

(3) The readymade is sometimes given an unexpected title. This also encourages us to think about the object anew: Why is Duchamp’s urinal entitled “fountain”? What do urinals have in common with fountains? How are they different? Why is a fountain suitable for public display (and a common site for sculptural decoration), while a urinal is not? 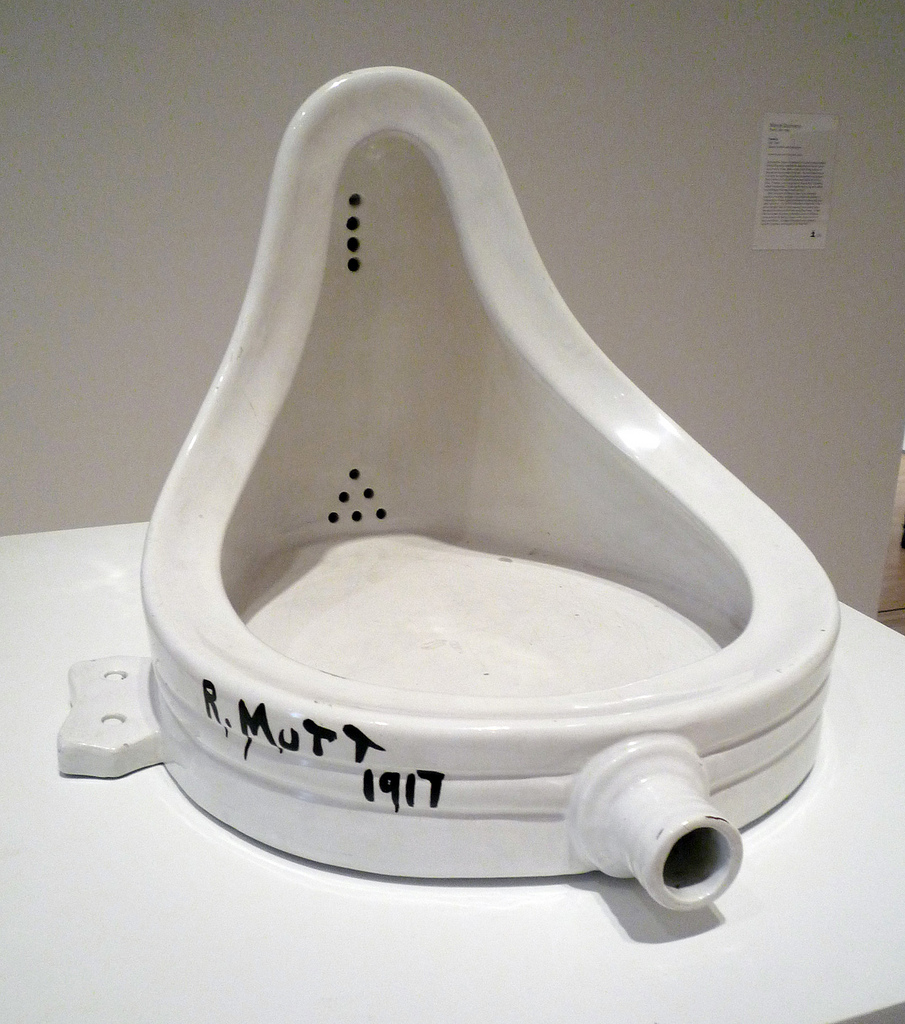 Stupid as a painter

Duchamp insisted that these points of intervention serve to “create a new thought for that object,” signaling that the purpose of the readymade is fundamentally conceptual, not aesthetic or technical. Any objection that the object is not beautiful or did not require any skill to make misses the point.

In a 1946 interview, Duchamp objected to the common French expression, “stupid as a painter” — roughly an equivalent to the American “dumb as a box of rocks’” or British “thick as two planks.”[1] He blamed the poor reputation of painters’ intelligence on the fact that art is so strongly associated with mere technical skill and/or sensual appeal — how well artists reproduce what they see or stimulate aesthetic pleasure. Readymades require neither technical skill nor formal sensitivity; the “art” is purely in the idea.

Invented in the context of Dada, many early readymades seem to be direct challenges to social conventions. (For a brief explanation of the underlying philosophy of Dada, see Tristan Tzara’s Dada Manifesto) For example, the American Dadaist Man Ray created an assisted readymade by welding a row of tacks to the bottom of a flatiron, an early form of clothes-press that was heated directly on a stove rather than by electricity. The result is worse than useless; it is actively counter-productive. An object intended to help keep clothes neat would instead reduce them to tatters. The title suggests a further assault on polite convention; as a gift, this iron would be very mean-spirited. Baroness Elsa von Freytag-Loringhoven and Morton Schamberg’s assisted readymade God was made by fitting a plumbing trap to a miter box. Separately, each object had a useful function. The water in the U-bend of a plumbing trap prevents sewer gas from seeping into the house, and a miter box helps guide a carpenter’s saw to make perfect right-angle or 45-degree cuts. Putting them together makes both dysfunctional, and the title God adds a note of sacrilege to further shock the middle-class public that might encounter the object in an art gallery.

For a Dadaist, the fact that such found objects violate expectations for what art “should” be is part of their program of undermining social conventions. Indeed, the revered status of art and related concepts such as “creativity” and “originality” makes them an obvious target for a movement devoted to iconoclasm. In some cases the assault on art itself was direct. The first “pure” readymade — unmodified and not combined with another object — was a bottle rack that was so obviously inartistic it was discarded by Duchamp’s family after the artist left France at the beginning of World War I. An unknown inscription on the original work may have helped guide interpretations, but Duchamp himself could not remember it in later years.

The underlying idea may have been a pun based on the French name of the object, égouttoir. The root word “goutte,” meaning drop (as in drop of water) suggests its function to drain the water out of bottles placed upside-down on its spikes. But Duchamp, who loved wordplay, may have also seen a pun on the word “goût” (taste), which in French as in English has aesthetic as well as culinary significance. Duchamp insisted that readymades be selected “based on a reaction of visual indifference, with at the same time a total absence of good or bad taste.”[3] Indeed, the object is inartistic, anesthetic, tasteless — and placed in the center of an art gallery, the égouttoir could, by association, drain the taste from all the surrounding artworks. Another example of Duchamp’s deliberately anti-art readymades is a postcard reproducing one of the world’s most famous and revered works of art, Leonardo’s Mona Lisa, adorned with a mustache and goatee. Not only did Duchamp deface what is commonly regarded as a work of transcendent technical skill with a bit of crude graffiti, he violated gender norms as well by adding facial hair to a woman’s portrait. Beneath the image is more Duchampian wordplay: the initials L.H.O.O.Q., which read aloud in French sounds like “Elle a chaud au cul” — “she’s got a hot ass.”

From readymades to assemblages and conceptual art

Duchamp recognized that the power of readymades would diminish with proliferation, so he made only thirteen. The technique of creating art by carefully selecting and combining already-made objects has, however, proven enormously fruitful for other artists. Sculptures based on found objects have flourished since the “neo-Dada” assemblages of Robert Rauschenberg in the late 1950s. And although readymades remain controversial for many members of the general public, it is undoubtedly true that the contemporary art world now values artists’ concepts much more highly than their technical skills, just as Duchamp hoped.