Rivera was in the midst of a prolific period when he began this mural. His retrospective exhibition at MoMA opened in December 1931 to positive reviews, and contemporaneous mural projects in San Francisco and Detroit enhanced his celebrity as one of the greatest Mexican muralists. Yet something went amiss with the Rockefeller commission: whether it was censorship, a miscommunication, or something in between, Rivera’s Man at the Crossroads became one of the most infamous artworks that never was.

In the later (surviving) version at the Museo del Palacio de Bellas Artes, Man,Controller of the Universe, a worker at the center directs an enormous machine at the crossroads of the political ideologies dominating this period: capitalism (to the figure’s right) and communism (to the figure’s left). Though the composition is bursting with activity, Rivera establishes order by using the central figure as a vertical axis: if we fold the scene down the middle, spaces and objects (like the two giant magnifying glasses) align.

This arrangement encourages comparisons between the two sides. For example, at the top of the capitalist side (on our left, the central figure’s right), the brutalities of World War I are on display. Rivera underscores how capitalist nations use technology (poison gas, machine guns, and warplanes) as destructive forces.

By contrast, the top of the communist side (our right, the central figure’s left) highlights the glories of the Russian Revolution, whose momentum overflows into the lower part of the composition.

If we continue to focus on the right side, we see key figures in the worker’s movement (León Trotsky, Friedrich Engels, and Karl Marx) standing at the foot of a headless classical sculpture brandishing a swastika. As our gaze moves to the lower right, we realize workers are seated on the sculpture’s decapitated head.

On the other side of the composition, Rivera places another classical sculpture (this one anachronistically wears a Christian cross). Though the figure lacks hands, his face and lightning bolt reveal him as Zeus, the supreme Greek god. By defacing these classical sculptures, Rivera critiques traditional art history (and its seemingly rarefied tastes) as well as the political elite (from the empires of antiquity to the Catholic Church and Fascists) that—in his view—had repressed the popular masses throughout human history.

Through this symbolic beheading, the communists have replaced the dominant ideology in Europe with a new way of thinking. Though the statue on the other side holds a ray of lightning, his handless state renders him powerless amidst the turmoil in capitalist countries: behind the sculpture’s base, workers in New York City fight against the police while the wealthy (whose ranks include a bespectacled Nelson Rockefeller), indulge in debauchery between the magnifying glass on the left and the central worker. The “pie slice” across from this scene features Vladimir Lenin holding the hands of workers of distinct races. Despite being a small fragment of the mural, this tableau is at the heart of the controversy Rivera faced in the United States.

Though Rivera enjoyed tremendous success, he also faced harsh controversy, for both his political beliefs and artistic practice. Though he considered his murals at the Detroit Institute of Arts (1932–33) among his greatest works, his work there faced opposition due to the depiction of men of different races working together.

The most notorious controversy of his career came as he painted Man at the Crossroads, the mural for Rockefeller Center’s Radio Corporation of America (RCA) building in 1933 (the fresco that he later based Man, Controller of the Universe on). Of the hundreds of characters in Man at the Crossroads, Lenin caused the most debate. An April 24th headline from the New York World-Telegram stated, “Rivera Perpetrates Scenes of Communist Activity for RCA Walls—And Rockefeller, Jr. Foots Bill.” Ten days later, Nelson Rockefeller, Rivera’s patron and member of a famously wealthy family, asked the artist to remove Lenin. When Rivera refused, he was paid in full and dismissed. The murals were covered up and later destroyed, as Rivera’s supporters rallied to save the work. E.B. White’s “I Paint What I See,” written in protest, poignantly highlights this meeting of differing political ideologies:

I paint what I paint, I paint what I see,
I paint what I think, said Rivera […]
I’ll take out a couple of people drinkin’
And put in a picture of Abraham Lincoln; […]
But the head of Lenin has got to stay!
It’s no good taste in a man like me,
Said John D’s grandson, Nelson. […]
For this, as you know, is a public hall.
And people want doves, or a tree in fall,
And tho your art I dislike to hamper,
I owe a little to God and Gramper.
And after all,
It’s my wall …
We’ll see if it is, said Rivera. [1]

As White predicted, Rivera had the last laugh. Eight decades later, his mural exists in two places: physically, in the Museo; and, as befitting a censored work, thriving in art history scholarship.

More from Smarthistory on Rivera’s Man at the Crossroads. 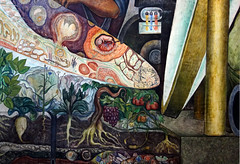 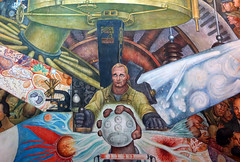 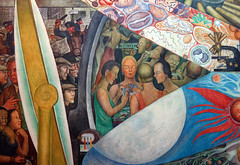 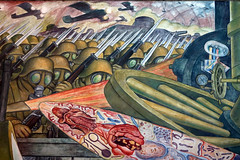 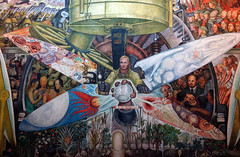