Age twenty and looking rather goth 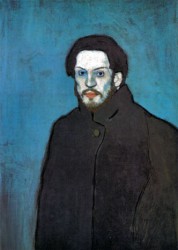 When I’m in the galleries at The Museum of Modern Art in New York, I obviously spend a good deal of time looking at the art. But I also watch people look at the art and listen to what they have to say. The comments that people make can be quite thoughtful and visitor comments and questions have added enormously to my appreciation of the art over the years. Still, there are many comments that are born of pure befuddlement. And many of these target Picasso.

Many people seem to believe that Picasso’s abstraction of the human figure, his penchant for reconfiguring the body by mis-aligning a nose or an eye, for instance, is the result of his inability to draw. Nothing could be farther from the truth. There is an old anecdote that tells of Picasso, who, upon emerging from an exhibition of drawings by young children, says, “When I was their age I could draw like Raphael, but it took me a lifetime to learn to draw like them.”

Perhaps this quote is apocryphal, but it points to something undeniably true: Picasso was an extraordinary craftsman, even when measured against the old masters. That he chose to struggle to overcome his visual heritage in order to find a language more responsive to the modern world is an important triumph that has had a vast effect upon our world. Picasso’s art has transformed and inspired not only artists, but also architects, designers, writers, mathematicians, and even philosophers. We may look at Picasso’s art in museums, but his art—via these translators—has therefore had a profound influence on what we see in our everyday life. Just think of the advertisements for products we buy, buildings in which we live and work, books we read, and even the way we conceive of reality.

“My kid could make that” 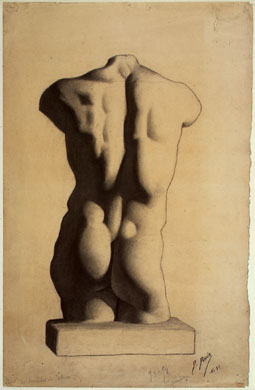 There is no question that Picasso’s art has had a most profound impact on the twentieth century. While Picasso suggests the value of unlearning the academic tradition, it is important to remember that he had mastered its techniques by a very early age. His father, Don José Ruiz Blasco, was a drawing teacher and curator at a small museum. The young Picasso began drawing and painting by age seven or eight. By age ten, Picasso assisted his father, sometimes painting the minor elements of the elder’s canvases. Soon after his father became a professor at the art academy in Barcelona, the young Picasso completed the entrance examinations (in record time) and was advanced to the school’s upper-level program. He repeated this feat when he applied to the Royal Academy in Madrid. 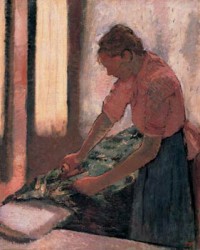 Like Van Gogh had done before him, Picasso arrived in Paris determined to work through the avant-garde’s techniques and subjects to better understand such art. An example of his explorations of the achievements of contemporary art in Paris can be seen by comparing a painting by Degas to one by Picasso. 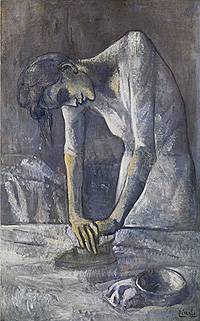 It is not surprising that Picasso, the great draftsman, would be interested in the work of the “odd man out” Degas, who nearly alone among the Impressionists retained the primacy of line. In the example Woman Ironing, Picasso has infused a somewhat maudlin weariness to his attenuated and curiously sensual laborer. Still, Picasso understands Degas’s experimentation with abstraction. Note how in Degas’s image, the luminous negative space defined between the arms refuses to recede beyond the figure, remaining trapped instead. Likewise, Picasso defines and centers an almost identical form. Notice, too, the bowl that Picasso places in the lower right corner. Like everything in this canvas, it is roughly formed with a dry brush. Still, the simple strokes of white and dark gray that define the volume speak to the magical pleasure of rendering space, a love that Picasso carries with him through out his career. 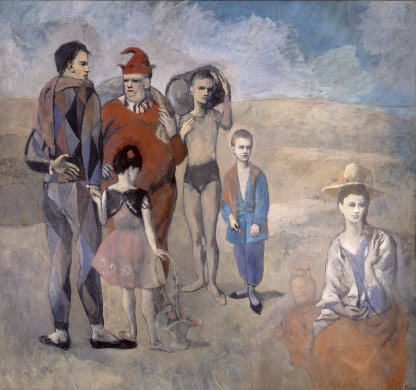 This great, early painting by Picasso portrays a family of saltimbanques. These are wandering circus performers that move from town to town—never truly welcome, and only briefly tolerated for their ability to entertain.

Like so many of Picasso’s early subjects during his so-called Blue and Rose periods in the first years of the twentieth century, here is a group of disenfranchised, alienated people that live on the fringes of society. This particular group includes characters from the sixteenth-century Italian performing tradition of commedia dell’arte. One such figure is the rogue wit known as the Harlequin, who wears a suit of multicolored triangles. Picasso seems to have identified with such characters at this time. As he often reminded people, he was very poor at this point in his career. A Spaniard in France who did not yet speak the language, and still an unknown artist only in his mid-twenties, Picasso might well have felt an affinity with itinerant outsiders such as the saltimbanques.

In Paris in 1904, Picasso rented a studio in an old, dilapidated building filled with artists and poets. Located at 13 Rue Ravignan, the building was dubbed the Bateau-Lavoir (or laundry barge) by poet-in-residence, Max Jacob. It is at this time that Picasso first came into contact with French painter Henri Matisse, as well as American ex-pat Gertrude Stein, who—along with her brother Leo—was one of the foremost patrons of modern art in Paris.

Portrait of Gertrude Stein at The Metropolitan Museum of Art