When you think of maps, what comes to mind?  An informative document used by travelers? Demarcations of national borders and geographic features?  At the very least, we might think of some factual representation of the world, not one that is fictitious or subjective.

Imagine a map of the world. Now take a moment to examine the following map, created by members of the Surrealist movement and published in the Belgian journal Variétés in June 1929. This anonymous map might seem unsettling; it emphasizes certain areas while removing others, and changes dramatically the size of landmasses. How is this map different from the world we know? And, although it might seem like an odd place to begin, what can it tell us about the ideas and approaches of the Surrealists? Historians typically introduce Surrealism as an offshoot of Dada. In the early 1920s, writers such as André Breton and Louis Aragon became involved with Parisian Dada. Although they shared the group’s interest in anarchy and revolution, they felt Dada lacked clear direction for political action. So in late 1922, this growing group of radicals left Dada, and began looking to the mind as a source of social liberation. Influenced by French psychology and the work of Sigmund Freud, they experimented with practices that allowed them to explore subconscious thought and identity and bypass restrictions placed on people by social convention. For example, societal norms mandate that suddenly screaming expletives at a group of strangers—unprovoked, is completely unacceptable. Surrealist practices included “waking dream” seances and automatism. During waking dream seances, group members placed themselves into a trance state and recited visions and poetic passages with an immediacy that denied any fakery. (The Surrealists insisted theirs was a scientific pursuit, and not like similar techniques used by Spiritualists claiming to communicate with the dead.) The waking dream sessions allowed members to say and do things unburdened by societal expectations; however, this practice ended abruptly when one of the “dreamers” attempted to stab another group member with a kitchen knife. Automatic writing allowed highly trained poets to circumvent their own training, and create raw, fresh poetry. They used this technique to compose poems without forethought, and it resulted in beautiful and startling passages the writers would not have consciously conceived.

In the autumn of 1924, Surrealism was announced to the public through the publication of André Breton’s first “Manifesto of Surrealism,” the founding of a journal (La Révolution surréaliste), and the formation of a Bureau of Surrealist Research. The literary focus of the movement soon expanded when Max Ernst and other visual artists joined and began applying Surrealist ideas to their work. These artists drew on many stylistic sources including scientific journals, found objects, mass media, and non-western visual traditions. (Early Surrealist exhibitions tended to pair an artist’s work with non-Western art objects). They also found inspiration in automatism and other activities designed to circumvent conscious intention. Surrealist artist André Masson began creating automatic drawings, essentially applying the same unfettered, unplanned process used by Surrealist writers, but to create visual images. In Automatic Drawing (left), the hands, torsos, and genitalia seen within the mass of swirling lines suggest that, as the artist dives deeper into his own subconscious, recognizable forms appear on the page.

Another technique, the exquisite corpse, developed from a writing game the Surrealists created. First, a piece of paper is folded as many times as there are players.  Each player takes one side of the folded sheet and, starting from the top, draws the head of a body, continuing the lines at the bottom of their fold to the other side of the fold, then handing that blank folded side to the next person to continue drawing the figure. Once everyone has drawn her or his “part” of the body, the last person unfolds the sheet to reveal a strange composite creature, made of unrelated forms that are now merged. A Surrealist Frankenstein’s monster, of sorts. Tanguy began his painting Apparitions (left) using an automatic technique to apply unplanned areas of color. He then methodically clarified forms by defining biomorphic shapes populating a barren landscape. However, Magritte, employed carefully chosen, naturalistically-presented objects in his haunting painting, The Central Story. The juxtaposition of seemingly unrelated objects suggests a cryptic meaning and otherworldliness, similar to the hybrid creatures common to exquisite corpse drawings. These two visual styles extend to other Surrealist media, including photography, sculpture, and film.

Today, we tend to think of Surrealism primarily as a visual arts movement, but the group’s activity stemmed from much larger aspirations. By teaching how to circumvent restrictions that society imposed, the Surrealists saw themselves as agents of social change. The desire for revolution was such a central tenet that through much of the late 1920s, the Surrealists attempted to ally their cause with the French Communist party, seeking to be the artistic and cultural arm. Unsurprisingly, the incompatibility of the two groups prevented any alliance, but the Surrealists’ effort speaks to their political goals.

In its purest form, Surrealism was a way of life. Members advocated becoming flâneurs–urban explorers who traversed cities without plan or intent, and they sought moments of objective chance—seemingly random encounters actually fraught with import and meaning. They disrupted cultural norms with shocking actions, such as verbally assaulting priests in the street. They sought in their lives what Breton dubbed surreality, where one’s internal reality merged with the external reality we all share. Such experiences, which could be represented by a painting, photograph, or sculpture, are the true core of Surrealism. The “Nonnational boundaries of Surrealism”*

Returning to The Surrealist Map of the World, let’s reconsider what it tells us about the movement. Shifts in scale are evident, as Russia dominates (likely a nod to the importance of the Russian Revolution). Africa and China are far too small, but Greenland is huge. The Americas are comprised of Alaska (perhaps another sly reference to Russia’s former control of this territory), Labrador, and Mexico, with a very small South America attached beneath. The United States and the rest of Canada are removed entirely. Much of Europe is also gone. France is reduced to the city of Paris, and Ireland appears without the rest of Great Britain. The only other city clearly indicated is Constantinople, pointedly not called by its modern name Istanbul. An anti-colonial diatribe, the Surrealists’s map removes colonial powers to create a world dominated by cultures untouched by western influence and participants in the Communist experiment. It is part utopian vision, part promotion of their own agenda, and part homage to their influences.

It also reminds us that Surrealism was an international movement. Although it was founded in Paris, pockets of Surrealist activity emerged in Belgium, England, Czechoslovakia, Mexico, the United States, other parts of Latin America, and Japan. Although Surrealism’s heyday was 1924 to the end of the 1940s, the group stayed active under Breton’s efforts until his death in 1966. An important influence on later artists within Abstract Expressionism, Art Brut, and the Situationists, Surrealism continues to be relevant to art history today.


Surrealism Reviewed: a selection of audio interviews and music (UbuWeb)

Digital archive of Surrealist journals from Spain, Chile, and Argentina (in Spanish) 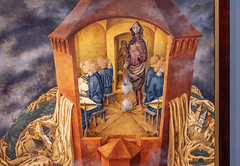 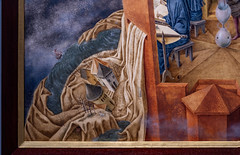