Varied patterns of brushstrokes define the landscape in André Derain’s Mountains at Collioure. Vivid blues and greens burst like fireworks from the twisted red branches of two trees rising up from a field of yellow-green vertical brushstrokes. A flowing horizontal line of blocky lilac strokes suggests a path or wall behind the trees, and diagonal strokes of green indicate a field rising towards the foothills. The mountains in the background are roiling forms painted in bright red, yellow, and blue under a pale green and yellow sky. Colors do not fade with distance according to the rules of atmospheric perspective. Their undiminished intensity makes the scene appear flat and decorative, just colors arranged in patterns on the surface of the canvas. Made in the summer of 1905 when Derain was painting in the south of France with Henri Matisse, Mountains at Collioure is a quintessentially Fauve landscape with its bright, unmodulated color and simplified forms. Both painters developed styles that synthesized the work of their Post-Impressionist predecessors. Matisse had previously used a technique of regularized brushstrokes derived from the Neo-Impressionists in Luxe, Calme et Volupté. He abandoned this technique for the more liberated and suggestive approach of Landscape at Collioure, in which the paint is applied in loosely patterned and widely separated brushstrokes to raw canvas. A greater degree of abstraction 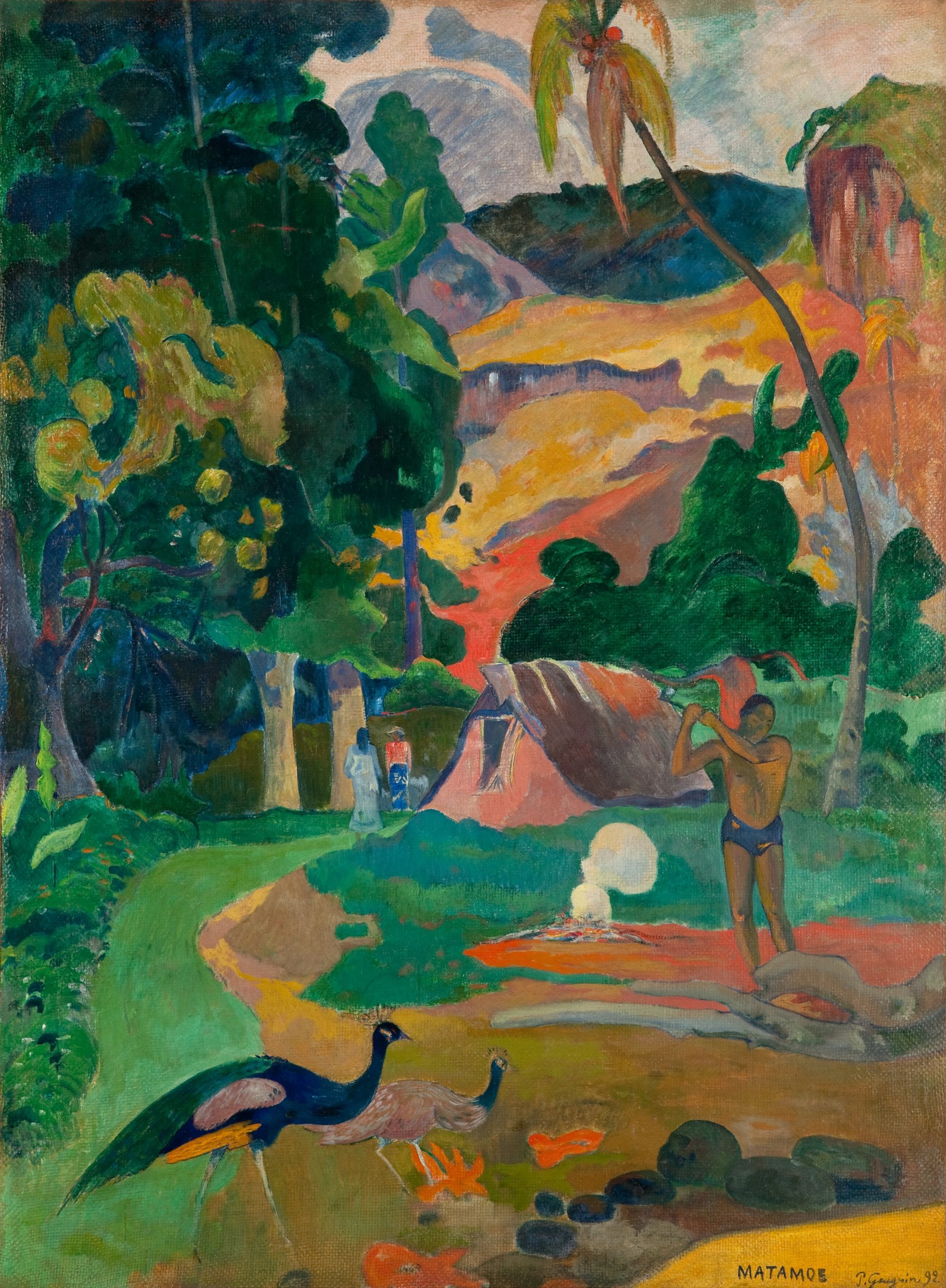 Derain’s Mountains at Collioure is more carefully structured than Matisse’s contemporary landscape. Both paintings use brilliant color and visible brushstrokes to create surface patterns, but Derain distinguished foreground from background by distinct differences in paint application. The foreground trees with their thickly painted, regular patterns of leaves were depicted in the style of van Gogh, while the undulating flat colored planes of the background mountains echoed Gauguin’s abstraction of landscape forms.

Like the Post-Impressionists, Derain and Matisse intensified or even disregarded local colors in their landscapes while emphasizing surface patterns and textures. What distinguished their paintings from their predecessors and prompted an art critic to call them “Fauves” (wild beasts) was their use of more simplified color palettes, more liberated and inconsistent brushwork, and a greater degree of abstraction in both form and color.

Landscapes and city views were the favored subjects of the Fauve painters. They followed the Impressionists and Post-Impressionists in depicting popular vacation spots and scenes of modern leisure. These included the Paris suburbs and beach resorts of Normandy favored by the Impressionists, as well as Mediterranean towns in the south of France painted by Cézanne, van Gogh, and Gauguin. Many of their compositions of these vacation spots are very similar to contemporary postcard views of the same locations. Their paintings are, however, far from photographic. All of the Fauve painters used a liberated style to create paintings that seem to celebrate the pleasures of painting as much as the pleasures of life. They embraced both the decorative qualities of painting — the abstract arrangement of colors and shapes—and the employment of liberated, expressive brushwork. Maurice Vlaminck is often considered the most truly Fauve painter of the group. A close friend of Derain’s, he was largely self-taught and a devoted admirer of van Gogh’s work. He painted the small towns and landscapes near the Paris suburb of Chatou where he lived. His use of intense color, thick paint, and simplified forms is very similar to van Gogh’s style. Vlaminck, however, applies paint much more randomly and chaotically than van Gogh, who meticulously organized his canvases into regularly textured patterns of repeating brushstrokes.

In Vlaminck’s The Banks of the Seine at Chatou, the blocky red tree trunks rise up from ochre, red, and bright blue stripes of long grass. Small patches of vibrant color pepper the upper portion of the canvas like a mosaic suggesting a tangle of branches and leaves swirling above the gleaming river on a bright windy day. Fauve painters tended to use a limited range of colors, emphasizing the brightest shades of the primaries (red, blue, and yellow) as well as the secondaries green and orange. Vlaminck took this restricted palette further than Derain and Matisse, and often used his colors straight out of the tube without mixing them. In Bougival he organizes the landscape in broad color areas: red for the foreground field, yellow leaves for the middle ground, green trees in the background, and blue hills and water in the distance. The paint is applied with simple, blunt strokes to create a powerful image of a fall day in the countryside. Derain’s Charing Cross Bridge is one of a series of paintings he was commissioned to make of London views. Claude Monet had recently exhibited an Impressionist series of London scenes, and Derain painted many of the same subjects in an aggressive Fauve style. Consistent with the Impressionist interest in recording specific atmospheric effects, Monet’s Charing Cross Bridge depicts the boats, bridge, and buildings dissolving into a bright haze of foggy light and visible brushstrokes. Derain’s painting, in stark contrast, makes no attempt to convey the effects of light in a realistic manner; instead, it is a riotous celebration of color and free brushwork. Bright reds, blues, and yellows dominate, with a glowing pale green shape indicating the distant Houses of Parliament.

Monet used delicate, textured brushstrokes to depict touches of light on the water, clouds of steam and swirls of fog. Derain’s brushstrokes are like colored bricks representing the patterns of light and reflections on the water’s rough surface. The sky, rendered with tightly packed vertical brushstrokes, is an apocalyptic orange-red, while the left side of the river is an even more intense shade of deep red with scattered light and dark blue strokes suggesting reflections. Deep and bright blues outline the boats and buildings, and the bridge itself is a deep blue marked with a row of red of X’s that slashes across the upper portion of the canvas. An area of yellow and orange brushstrokes on bare canvas creates a visual path of light on the river flowing under the bridge to the distant horizon. Flat pale clouds of smoke rise above the bridge like cartoon bubbles. The subject is recognizable, but the colors and simplifications of form render it hallucinatory. Next to Derain’s wildly exaggerated vision, Monet’s Impressionist view looks extremely refined and even old-fashioned with its nuanced rendering of reflected light and color. Most of Derain’s London paintings depict river views, but he also painted a crowded shopping street. In Regent Street the simplifications of color and form create a compelling image of the city’s commercial district. Horse-drawn carriages, a bicycle, and pedestrians fill the roadway. We see shop signs and posters, flags and street lights. A man wearing advertising posters dominates the lower left corner, while fashionably dressed shoppers occupy the right as they move down the sidewalk towards us. Derain’s Fauve colors and shapes are here an effective means to render the chaos of the modern city. Raoul Dufy painted many scenes of the beach resorts in Normandy with bright colors and simplified forms. Rather than using the intense, often non-naturalistic colors of the leading Fauves — Matisse, Derain and Vlaminck — Dufy chose subjects that were themselves brightly colored, such as advertising billboards and the flag-decorated streets of Bastille Day. His approach was closer to Impressionism, but like his fellow Fauves he embraced simplified form, brilliant colors and direct visible brushwork.