As an artist, Julian Martínez from San Ildefonso Pueblo is best known for the ceramics he made with his wife, Maria Martínez. Together, they produced the matte-black on polished-black pottery for which they and their Pueblo colleagues gained international fame.

Maria formed the pots into elegant shapes and Julian painted the designs, both geometric and figurative, including historic motifs such as the feather pattern from Mimbres pottery and the avanyu, the horned serpent similar the Mesoamerican deity Quetzalcoatl.

Julian Martínez also worked at the Museum of New Mexico, where he took advantage of the opportunity to study the Museum’s collection of Southwestern pottery, and he learned more during the summers when he worked at the field school at the Pajarito Plateau (later renamed Bandelier National Monument). In addition to his work on pottery, Martínez drew on paper; he always kept a notebook where he sketched ideas and recorded what he had seen. Though most of his images were painted on paper, he created a few murals on walls and, on rare occasions, he painted on hide, as he did for his Buffalo Dancers from about 1930, now in the collection of the National Museum of the American Indian in New York City (below). 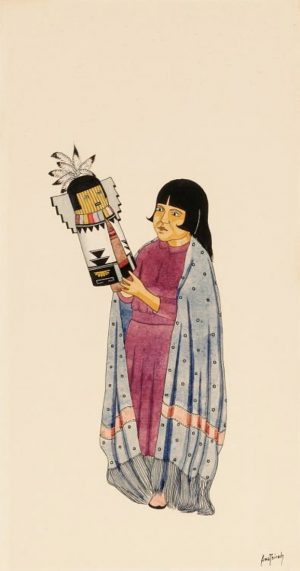 Painting has long been part of Pueblo life; it can be found on the walls of the kivas (the round ceremonial structures usually partially underground) and on dance regalia such as wands, tablitas (ceremonial headdresses), clothing, and other items. A thriving art community developed around 1900 during a difficult time in Pueblo history: due to illness and outward migration, the population was reduced to less than 200. When the Atchison Topeka and Santa Fe Railway extended its track to the area in 1880, the economy of the Pueblo was transformed as more outside goods were purchased and more items, especially ceramics and paintings on paper, were made to sell to tourists traveling to the area.

Martínez was elected governor of San Ildefonso in 1925 and he served as a leader in ceremonies. Like other Pueblo painters, he refrained from depicting ritual objects, sites, and altars that were considered private, and focused instead on dances that were open to the public. The Buffalo Dance is one of the most commonly represented of all Pueblo dances by the Self-Taught Group.  Art historian J.J. Brody described it as one of the most “comprehensible to outsiders of all public ritual dances of the Pueblo people.” [1] Performed annually on January 23rd to honor the Pueblo patron saint, San Ildefonso, the Buffalo Dance enacts a hunting scene, with three dancers playing the roles of a hunter, buffalo, and a buffalo maiden (or buffalo mother) who has the power to induce the animals to sacrifice themselves to provide food and hide.

Early twentieth-century Pueblo paintings by artists including Tsireh, Peña, and Martínez all depict the Buffalo Dance in the same way, with the three figures in profile, facing the same direction as they would be during the dance.  The men wear a buffalo headdress and dance kilts with depictions of avanyu (a horned serpent), and their skin is painted black. The buffalo maiden wears an embroidered one-shouldered manta, or dress. In this hide painting, Martínez gave all three figures the same facial features, focusing instead on varying details in their clothing and regalia. There is no sense of space; the figures lack modeling and do not cast shadows. The flatness of the figures and the lack of a background suggest the influence of early Modernist abstraction. The empty space might also symbolize an area that is sacred—unbound by place or time. Paintings of such dances might even portray a space where the viewers themselves also participate in the dance, because, as anthropologist Alfonso Ortiz from Ohkay Owingeh Pueblo has observed, everyone in the community dances in ceremonies.[2]

Though Martínez painted several versions of the Buffalo Dance, the NMAI version is unusual for its material: animal hide. More commonly used in art from the Plains, hide is stronger and suppler than paper as a base. This particular hide has small holes on three of its sides, suggesting that it was used to cover a portfolio or large book, with a string or leather cord run through the holes to attach it over a group of drawings.[3] Later, the image may have been unlaced and cut along one side, accounting for the smooth edge.

With its bright colors and strong forms, Julian Martínez’s Buffalo Dancers exemplifies the early period of Pueblo painting. In 1932, the Santa Fe Indian School (whose painting program became known as “The Studio School”) started teaching art, and developed the Santa Fe Indian School Style. This new style retained the earlier emphasis on dance and genre scenes with the same flatness and lack of modeling, but the work became more decorative and lost the intimacy of the earlier works.

During Martínez’s life, local artists, anthropologists, and ethnographers expressed their appreciation for his work, noting his radiant colors, technical skill, and mastery of form. Martínez’s Buffalo Dancers, like other paintings produced by the San Ildefonso Self-Taught Group, conveys a sense of movement and energy in its figures and shares the joy of the ceremonies.

[2] Alfonzo Ortiz, The Tewa World: Space, Time, Being and Becoming in a Pueblo Society (Chicago, Illinois: The University of Chicago Press, 1969).

[3] I am indebted to Dr. Jonathon Batkin and Dr. Bruce Bernstein for sharing this idea.

Mimbres Pottery (from the Smithsonian)

Elizabeth A Newsome, “Reflexivity and Subjectivity in Early Native American Painting: A Critique of Perspectives on the Traditional Style,” American Indian Culture and Research Journal 25:3 (2001), pp.103-142.

Alfonzo Ortiz, The Tewa World: Space, Time, Being and Becoming in a Pueblo Society (Chicago, Illinois: The University of Chicago Press, 1969).

Tryntje Van Ness Seymour, When the Rainbow Touches Down: The Artists and Stories Behind the Apache, Navajo, Rio Grande Pueblo, and Hopi Paintings in the William and Leslie Van Ness Denman Collection. (Phoenix, Arizona:  Heard Museum, 1988).