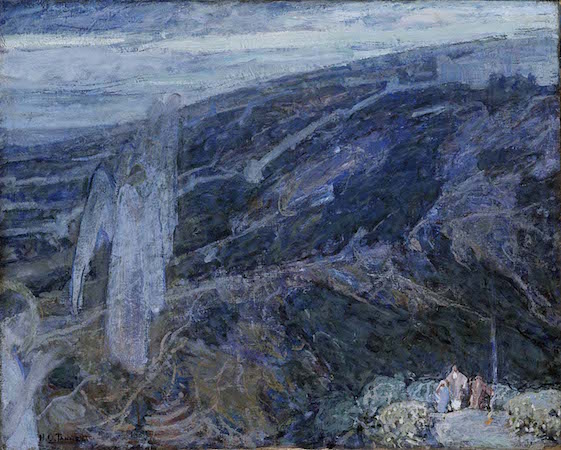 Henry Ossawa Tanner’s evocative Angels Appearing before the Shepherds compels us to ask larger questions: what is the purpose of art that depicts religious subjects? Can the visual arts dramatize the Biblical word in a way that text cannot? Tanner grappled with these questions in a painting depicting a scene from the New Testament when angels appeared before the shepherds in Bethlehem to announce the birth of Jesus. In doing so, he followed in the footsteps of many artists—like those that crafted the stained glass windows at Reims Cathedral depicting Christian angels and saints or the craftsman that sculpted bronze statues of Hindu gods in 11th century India—who used the power of visual representation for religious messages.

Tanner, his formation and influences

Henry Ossawa Tanner was the first African-American painter to gain critical recognition outside of the United States in the late nineteenth and early twentieth-century. Trained at the Pennsylvania Academy of Fine Arts under the guidance of Thomas Eakins and then at the Académie Julian in Paris with Jean-Léon Gérôme, Tanner’s remarkable talent and experience was highly unique for a man of his position and race in post-Civil War America. 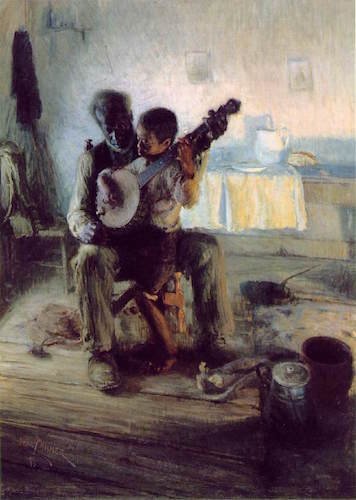 Though Tanner painted his most well-known works, The Banjo Lesson (1893) and The Thankful Poor (1894), in a more naturalistic style, he painted Angels Appearing before the Shepherds in a more abstract, Symbolist style. The painting reflects his lifelong fascination with Christianity and the stories of the Bible. Tanner’s father, Benjamin Tucker Tanner, was a minister in the African Methodist Episcopal Church in Pittsburgh and a political activist for the abolition of slavery, and religion played an important role in Tanner’s life and art.

Tanner completed this painting a few years after traveling to the Middle East in 1897. His first major biblical paintings, Daniel in the Lions’ Den (1896) and The Resurrection of Lazarus (1897) (below), gained critical acclaim in the Paris Salon (the official art exhibition of the Académie des Beaux-Arts). The art critic Rodman Wanamaker funded a trip for Tanner to visit the Middle East claiming that any serious artist who wanted to paint biblical scenes with conviction should familiarize himself with the Holy Land. From the experience of his travels, Tanner evokes the various shades of blue in the twilight sky of Jerusalem along the hills of Bethlehem. 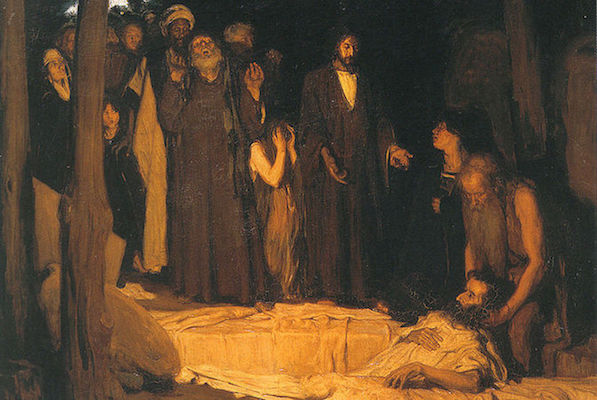 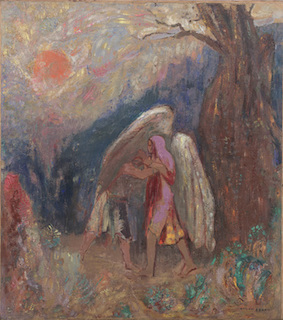 Tanner’s painting of the angel and shepherds is a familiar subject for many artists like Rembrandt, Castiglione, and Thomas Cole. He depicts the pivotal scene of revelation, but renders it in a more lush and atmospheric tone than seen in the work of previous painters. Tanner’s exposure to the work of the post-Impressionists and the Symbolists in Paris in the 1890s seems to influence his hazy melding of color and line. The work of Odilon Redon, in particular, is a strong influence in this depiction of the multi-formed angel and in the blending of cool muted colors to echo the tones of pastels.

Looking closely at the painting, we have to ask ourselves what was the artist thinking in choosing to paint this dramatic scene in blue. Why would Tanner depict such an important scene of spiritual revelation in shadowy tones and cool colors? 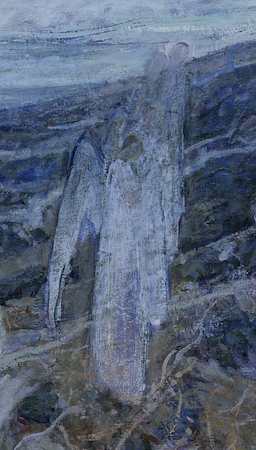 Around the time Tanner painted this, the work of the Symbolist painters was at the vanguard of new intellectual thought in art in Paris, a group which included Paul Gauguin, Odilon Redon, and Gustave Moreau. The Symbolists were influenced by the color theories of German artist Franz von Stück, who was in turn influenced by Johan Wolfgang von Goethe’s important theory of color published in 1810. According to Goethe, colors, in addition to their inherent optical and scientific qualities, possessed psychological qualities as well. Stück explained that blue exuded mystery, eternity and calm. Through his modulated use of shades of blue and gray, Henry Tanner’s painting exudes the tranquility of God’s spiritual grace.

Beyond the colors, it is also important to consider our perspective as viewers into the painting. By situating our point-of-view from behind the angels, we look down at the distant figures of the shepherds below. Tanner enhances our sense of wonder by heightening the illusion of flight, the vastness of the landscape, and smallness of the shepherds within the aerial view. 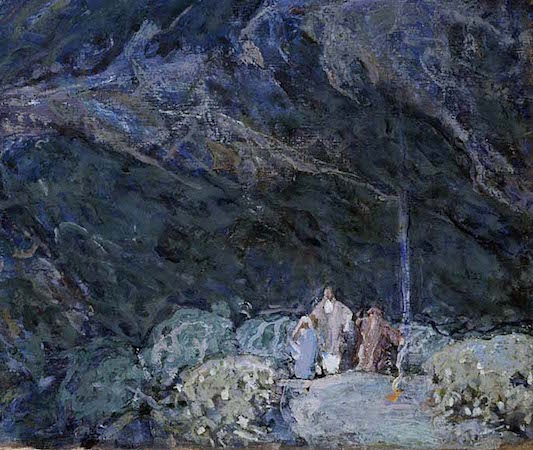 This painting is emblematic of Tanner’s evolving style in the middle part of his unique career. The critical acclaim of The Banjo Lesson made him wary that he might be restricted to painting tender scenes of rural life among Black Americans, which would have been limiting to a man of his diverse interests and cosmopolitan background. In Angels Appearing before the Shepherds, we see Tanner move from the more traditional, naturalistic style of The Banjo Lesson, inspired by the work of Vermeer and the light-infused paintings of the Dutch Golden Age, to the more visionary approach of the Symbolists.

The influence of the nineteenth-century Romantic painters is also a palpable influence. In the cool blue glow of light along the Judean hills, Tanner evokes the moon paintings of Caspar David Friedrich (below), whose work inspired other American artists like Childe Hassam and Frederic Remington. Like Friedrich, who brings his spectator into a hushed communion with his cloaked subjects and the otherwordly eminence of nature and God, in Angels Appearing before the Shepherds, Tanner represents a time, tone, and scene conducive to a mood of spiritual reflection. As the art historian Alexander Nemerov describes Friedrich’s paintings, “the figures not only stand for the audience outside the canvas, but show us how to behave in the presence of moonlight—with awe and reverence.” 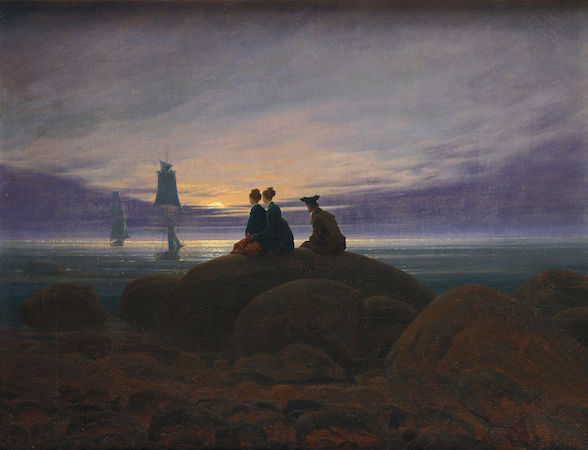 To an early twentieth-century European and American audience, the grandeur of biblical imagery in art was embodied by the traditional style of Rembrandt, Rubens, and the painters of the Spanish Baroque. Henry Tanner hoped to redefine religious painting in the twentieth century and to prove that an American—a Black American—could create incisive and moving religious art on par with the work of the European Masters. Tanner proved that the visual representation of the Bible could indeed continue to be fresh, modern and highly relevant and accessible to any contemporary age.

This painting at the Smithsoinian American Art Museum