Careful inspection reveals this line drawing to be based on an electric diagram of an automobile, with two headlights at the bottom corners and a spark plug just right of center at the top. There are a number of schematic electro-mechanical components and wiring that attaches to the crotch and left breast of an empty woman’s corset. Nothing in the diagram or the text explains how this is a portrait of the Mexican writer and caricaturist Marius de Zayas, as the title indicates. It is one of many works by Picabia and other Dada artists that refer to modern science, engineering, and technology, often in bewilderingly nonsensical ways. What is this about? Why do science and technology feature so prominently in Dada works, and why are they treated so absurdly? Descriptions of scientific discoveries and advertisements for new technology tended to tout them in utopian terms — as solving longstanding problems and advancing wealth, leisure, and public welfare. In the early decades of the 20th century, modern artists such as Fernand Léger and Robert Delaunay celebrated the machine age both directly in their subject matter, and indirectly by choosing a hard-edged, geometric, rationalized style that mimicked machine-made products. In part, the Dadaists presented a scientific and mechanized vision of the world and humankind as an antithesis to expressionist artists, such as the Blaue Reiter group, who emphasized humankind’s spirituality. German Dadaists in particular adopted a materialist view of nature and human history that aligned with the political philosophy of Karl Marx and Communism. However, the Dadaists were also suspicious of the new science and technology for several reasons. Their response to the destructive use of technology during World War I is discussed in the essay Dada Politics. More generally, the Dadaists rejected all rational systems and utopian fantasies as part of their embrace of absurdism. Dadaists mocked all the ways that humankind has tried to find sense and purpose in what they saw as a senseless universe and purposeless existence.

For example, Three Standard Stoppages by French Dadaist Marcel Duchamp parodies the metric system, an attempt to advance scientific knowledge, engineering, and trade by standardizing units of measure. In 1799, France was the first country to adopt the metric system, when the meter was defined as one ten-millionth of the distance from the equator to the North Pole on a meridian passing through Paris. Duchamp created his own parodic metric system(s) by dropping three meter-long lengths of string from a height of one meter onto a horizontal plane, allowing each to twist “as it pleases,” and then tracing their lines to make three wooden prototype “rulers,” which were placed in a special case. These rulers can be used both for measurement (although all three differ in length), and as straightedges (although all three have different curving profiles). Needless to say, any scientific or engineering project that depended on Duchamp’s system would be sabotaged from the start. Duchamp used his new metric system to create one of the most absurd “engineering” projects of all time, The Bride Stripped Bare by her Bachelors, Even (1915-23), often called the Large Glass. Essentially a design for a machine to help the nine bachelors in the lower register make love to the bride above, the elaborate physics and engineering of the contraption were described in hundreds of notes that the artist wrote on scrap paper over many years. Many are written in complex pseudo-technical language, such as:

The bride, at her base, is a reservoir of love gasoline. (or timid power). This timid-power, distributed to the motor with quite feeble cylinders, in contact with the sparks of her constant life (desire-magneto) explodes and makes this virgin blossom who has attained her desire.Translated in Michel Sanouillet and Elmer Peterson, eds., The Writings of Marcel Duchamp (New York, 1973), pp. 43-4.

These bewildering notes were tossed into a box in no particular order, and in later years, Duchamp meticulously reproduced them in limited-edition box sets, thereby increasing the absurdity of the project.

Duchamp was inspired by the absurdist writings of French Symbolist author Alfred Jarry, who coined the term “pataphysics” to refer to a “science of imaginary solutions” that would “examine the laws governing exceptions” in his posthumously published novel The Exploits and Opinions of Dr Faustroll, Pataphysician (1914).[1] The term pataphysics is currently used to refer to works that imitate the language and imagery of science and technology, but upend them and make them dysfunctional or absurd.

The Dada artist Max Ernst was also inspired by Jarry, and claimed that his works could only be understood by “poets, pataphysicians, and a few illiterates.”[2] Among his absurd pataphysical creations was a set of works made by using a catalog of scientific teaching materials called Bibliotheca Paedagogica.

In this piece, for example, an illustration of the inner organs of a horse is flipped upside-down and selectively covered with opaque paints until it becomes a diagram of geological strata where bizarre fossilized life-forms and a machine with pulleys await discovery. Ernst’s title, written longhand below, reinforces the pseudo-scientific qualities of the work in a characteristically absurd way: Stratified Rocks, Nature’s Gift of Gneiss Lava Iceland Moss 2 kinds of lungwort 2 kinds of ruptures of the perinaeum growths of the heart b) the same thing in a well-polished little box somewhat more expensive.

While many Dada misappropriations of contemporary science and technology are nonsensical, others seem calculated to raise philosophical questions about human nature and ethics. This is especially true of works that use the common Dada tactic of substituting machines for humans, either in whole or in part. Human beings are commonly considered superior to machines because of our ability to feel, to act with free will, and to behave ethically — all of which are thrown into question when technology replaces humanity. As photographer Paul Haviland put it in a 1915 essay:

We are living in the age of the machine. Man made the machine in his own image. She has limbs which act; lungs which breathe; a heart which beats; a nervous system through which runs electricity. The phonograph is the image of his voice; the camera the image of his eye … After making the machine in his own image he has made his human ideal machinomorphic.Paul B. Haviland, statement in 291, nos. 7-8 (September-October 1915), n.p.

The same year, Francis Picabia made a portrait of Haviland as a lamp with its plug-less electric cord wrapped impotently around it. German Dadaist Raoul Hausmann’s Mechanical Head seems to realize this human-machine “cyborg” ideal, while at the same time underscoring the dangers of idealizing machines and using them to replace humanity.

Dada artists frequently conflated technology and sexuality, creating an uncomfortable disjunction between the cold, geometric impersonality of machines, and our expectations of emotionally-engaged, warm, organic intimacy. This is evident in Duchamp’s Bride Stripped Bare and Picabia’s Portrait of Marius de Zayas discussed above, and even more blatantly in Picabia’s Universal Prostitution, where an upright, phallic electrical machine spews provocative words (“to invite … to ignore … human body”) over the kneeling mechanical form to which it is wired. The lower form is labeled “ideological feminine sex” with her “travel bag,” suggesting an absurd commentary on the relationship between the genders. In all of his works illustrated on this page, Picabia’s style reinforces the machine-versus-human contrast. Where we expect the original, expressive, and autographic mark of the artist, Picabia employs the inexpressive linear anonymity of an engineering diagram.

The Dada interest in science and technology was not only highly topical in the early twentieth century during a burgeoning “machine age,” but it also posed wider, philosophical questions about what happens when machinery replaces humanity. 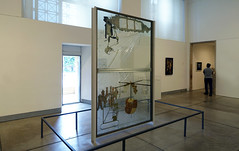 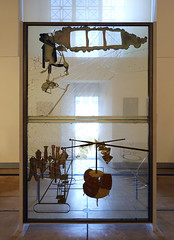 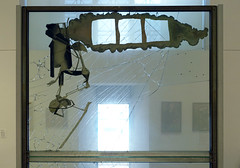 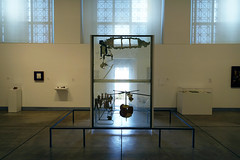 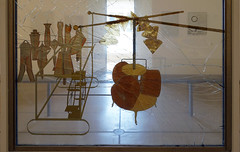 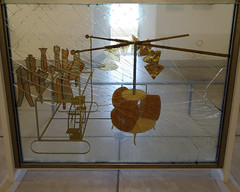 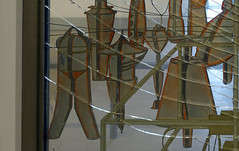 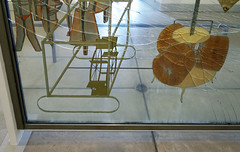 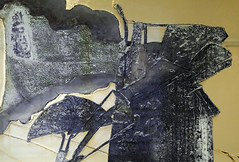 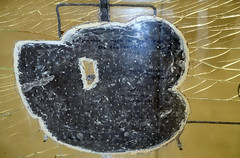