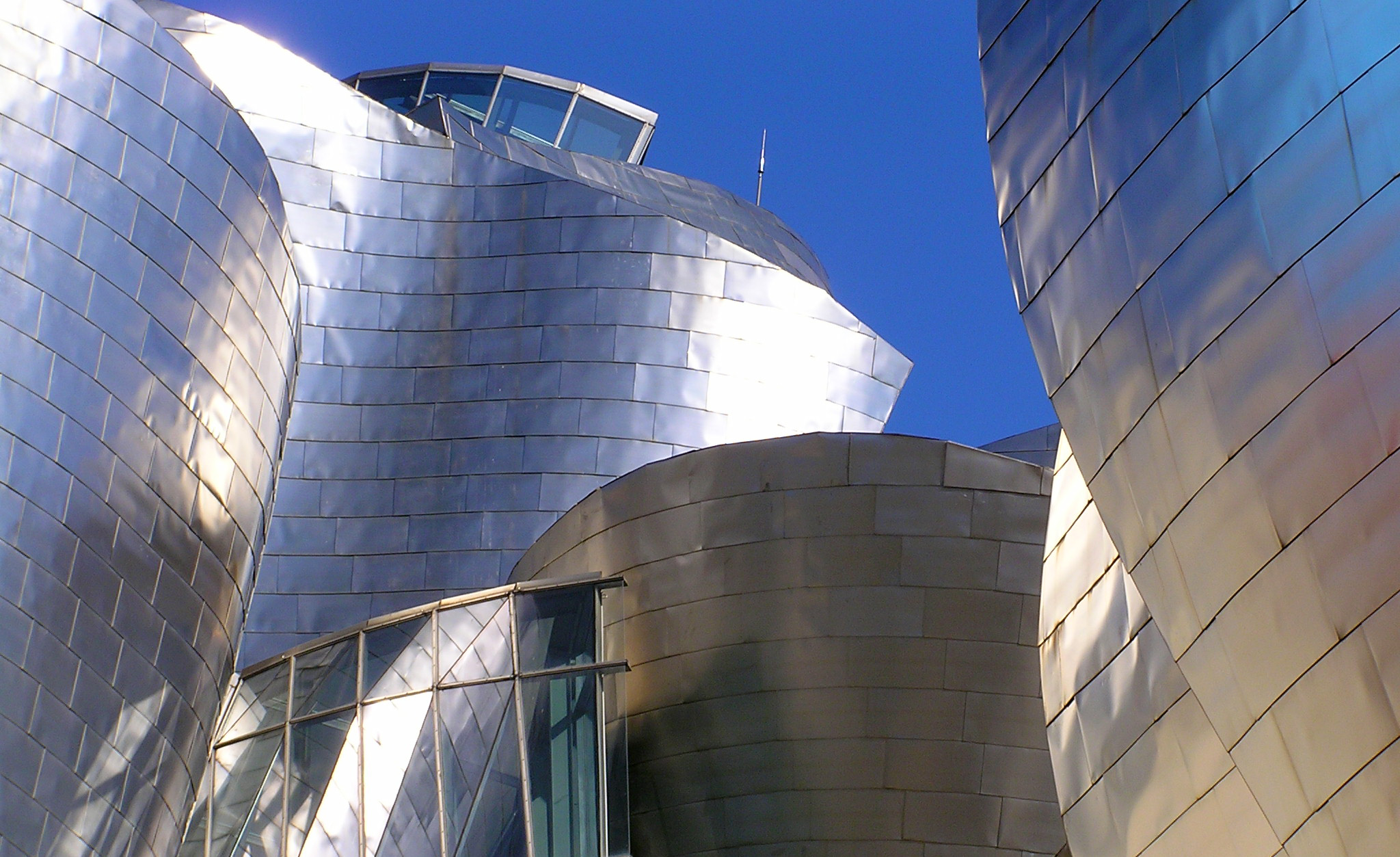 Prior to the mid-20th century, art museums in Europe and the United States were mostly designed in variants of the neo-classical style. From the Louvre in Paris to the National Gallery of Art in Washington, D.C. (below left), large and small cultural institutions commissioned stately stone structures, distinguished by pedimented fronts, long colonnades, and lofty rotundas. Axial and processional, exhibition galleries were traditionally arranged in rows, with understated decorative treatments that complement the artworks.

What is a pediment, colonnade, and rotunda

The 1959 Solomon R. Guggenheim Museum (originally the Museum of Non-Objective Art), with its spiraling concrete ramps, was one of the first museums to challenge this tradition. By the 1980s it had outgrown its Frank Lloyd Wright-designed Fifth Avenue home in New York (above right) and Thomas Krens, the museum’s director, began developing plans to expand the museum’s reach though the establishment of satellite branches funded by foreign governments. 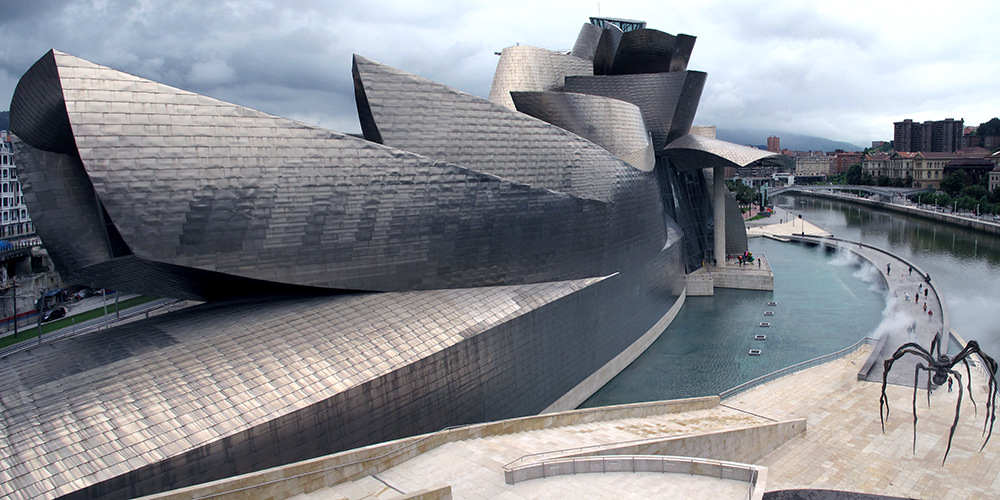 Among these projects, the 1997 branch in Bilbao, Spain, has been the most highly regarded. Not only did it provide the Guggenheim with a large exhibition venue for 20th century and contemporary art but it shifted the direction of museum design. At this point in his prolific career, Frank Gehry had a number of cultural institutions to his credit and was developing an international reputation for producing consistently innovative work. Born in Toronto, Canada, in 1929, this Los Angeles-based architect received the prestigious Pritzker Architecture Prize in 1989. Important early projects by Gehry include his remodeled bungalow (begun 1977) in Santa Monica, California, the Vitra Design Museum (1989) in Germany (below) and the Frederick R. Weisman Art Museum (1990-93) at the University of Minnesota, which was under construction when he received the Guggenheim commission. 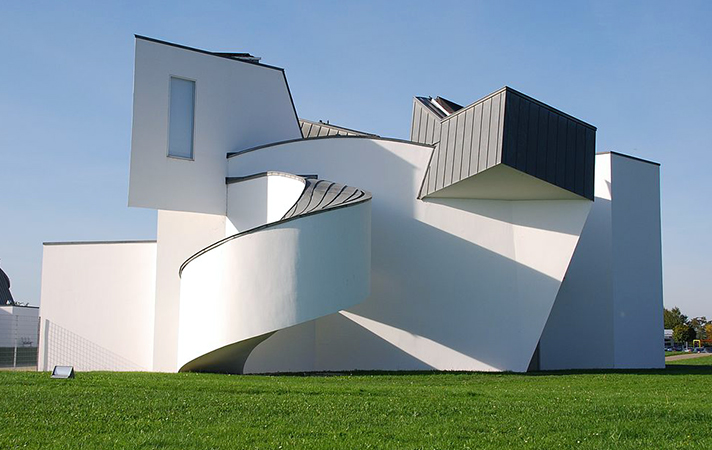 The Guggenheim Bilbao was also part of an ambitious urban renewal program conceived by the Basque regional government. An aging port and industrial center, the city had entered a period of significant economic decline during the 1980s. Various well-known architects were invited to design new structures, including Santiago Calatrava from Spain and Norman Foster from England. Though initial discussions focused on converting an existing industrial structure into an art museum, Krens convinced local officials to provide a more central and flexible location, a site on the banks of the Nerviron River. 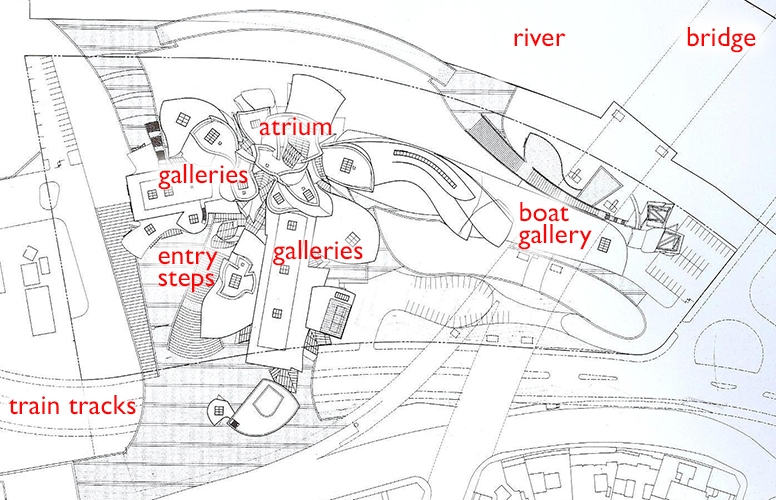 Comparisons to the Guggenheim Museum in New York would be inevitable. Krens urged Gehry to “make it better than Wright” and the Bilbao museum recalls the earlier building in various subtle ways. From the absence of historical references to the focus on a central rotunda or atrium—albeit in Bilbao on a much larger scale—both architects produced unrestrained modern spaces of great architectural force and energy. 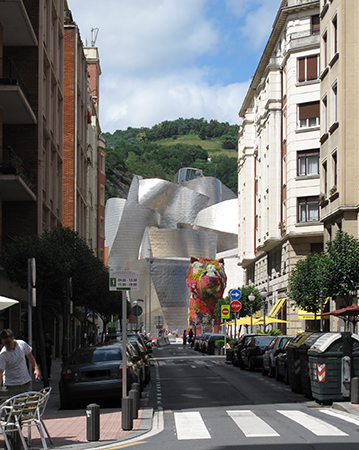 Gehry, who started his career in the 1960s, developed a personal aesthetic gradually, discovering exhilarating ways to shatter and re-assemble architectural forms. As most architects do, he began with the structure’s most basic program. After determining the size and shape of the interiors, he melded the forms together, arranging them into a lively sculptural whole.

Most photographs depict the Guggenheim Bilbao from across the river. Although this view is arguably the most dramatic and satisfying, the main entrance is on the opposite side of the building, at the foot of a narrow residential street, the Iparraguirre Kalea (above left). Arriving visitors cross over concealed railroad tracks and descend through a broad stepped limestone plaza passing from a slender notch into a soaring 165-foot atrium. A complex and somewhat chaotic interior, this twisting glass-and-steel volume combines irregularly-shaped limestone and plaster walls, glazed elevator shafts, and vertigo-inducing catwalks. 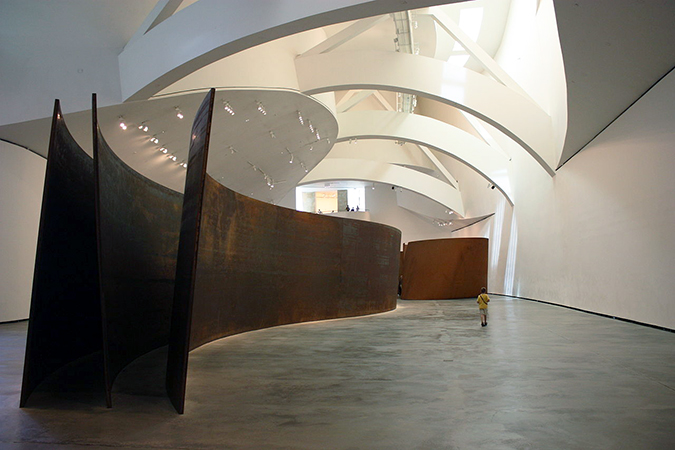 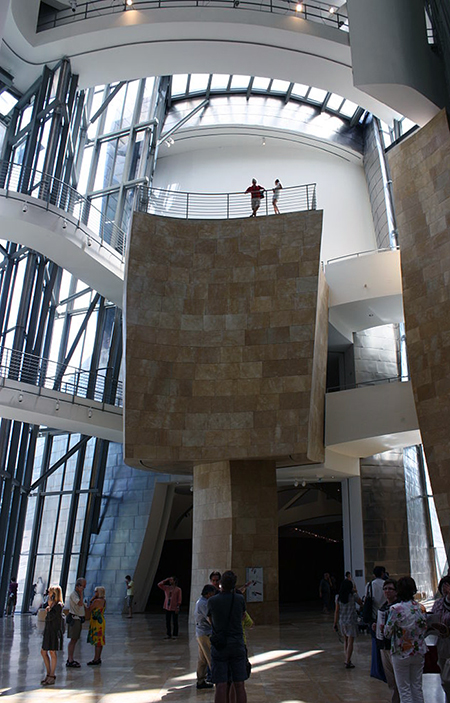 The central atrium (left) serves as a circulation hub and orientation gallery, providing access to approximately 20 galleries on three levels. While the sequence of “classic” galleries are predictably rectangular, other exhibition spaces have surprising shapes, with angled or curving walls and occasional balconies. Particularly memorable is the so-called “boat gallery.” Though Gehry compares the shape to a fish (a reoccurring motif in his work), this enormous column-free space (above) extends more than 400 feet along the river-front promenade and beneath the adjoining bridge. Ideal for large works of sculpture, this vast space contains an installation by Richard Serra.

A “miracle” in Bilbao

The Guggenheim Bilbao opened to the public in 1997. The reception to Gehry’s unorthodox design was nothing less than ecstatic, drawing international acclaim from fellow architects and critics, as well as from tourists who throng here from throughout the world. Herbert Muschamp, The New York Timesarchitecture critic called the undulating structure a “miracle.”[1] The benefit to the city’s local economy was immediate and substantial and numerous cities have tried (but not always succeeded) to match its success, commissioning similarly dynamic structures from high-profile “starchitects.” 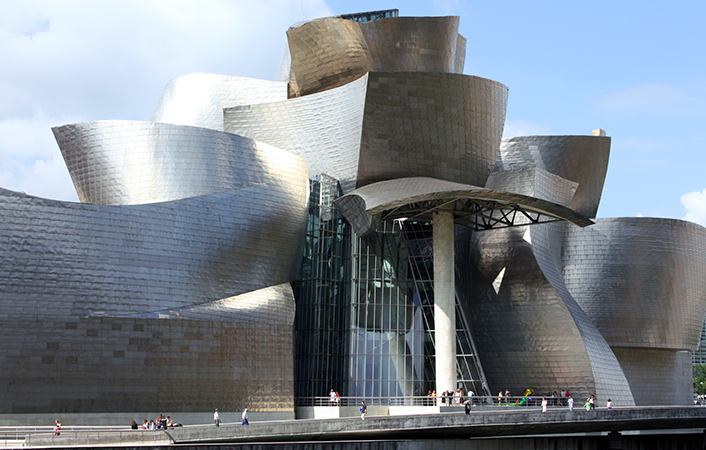