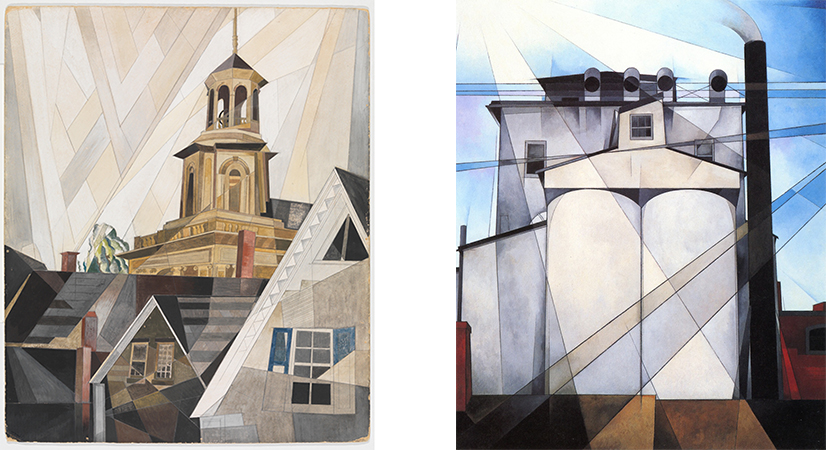 Charles Demuth is known as a Precisionist, and many of his paintings apply the fractured visual language of cubism and the dynamism of futurism to distinctive American places like cities and factories. In the 1920s, Precisionists like Demuth, Charles Sheeler, and others were called the “Immaculates” because of the smooth surfaces, clean lines, and meticulous geometry of their images. In this vein, Demuth painted the church tower and rooftops of Provincetown, Massachusetts in After Sir Christopher Wren, 1920, the brand new grain elevators in his hometown of Lancaster, Pennsylvania in My Egypt, 1927, and New York City in I Saw the Figure 5 in Gold, 1928.

From poem to painting

I Saw the Figure 5 in Gold was inspired by the poem, “The Great Figure,” written by Demuth’s friend, William Carlos Williams:

Among the rain
and lights
I saw the figure 5
in gold
on a red
firetruck
moving
tense
unheeded
to gong clangs
siren howls
and wheels rumbling
through the dark city.

Williams’ poem recalls a night when he was walking down Ninth Avenue in New York City on his way to painter Marsden Hartley’s studio. He heard the noises of a fire truck, only to turn around just as it was passing by. All he saw was the number of the truck, a five painted in gold, on a red background speeding past. At this moment in his career Williams was trying to create poems that were precise and concrete representations of original experiences, so he avoided symbolism and metaphor in favor of simple language that evokes the speed (“moving tense unheeded”), the sounds (“gong clangs siren howls and wheels rumbling”), and the images (rain, lights, firetruck, dark city) he witnessed. Reportedly, Williams wrote this one-sentence poem right there on the street that night. 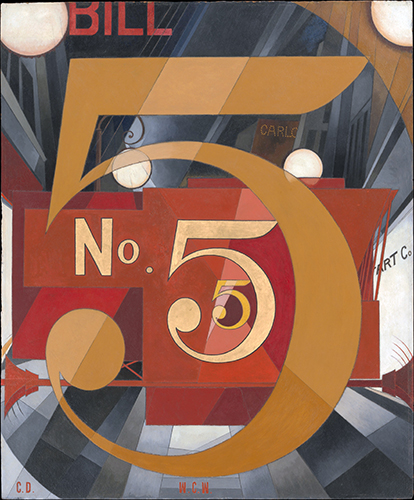 Williams’ poetry is deliberately straightforward, but Demuth’s painting is complicated. You really must know the poem to decode the painting. The setting is a tunnel-like street, which is flanked by sidewalks and buildings. Much of this backdrop is gray and black, but for the illuminated shop windows and globular streetlamps on both sides. The fire engine dominates the middle of the composition and although its form is abstracted we can recognize it by its red color. We can see the truck’s ladder on the right, and a long bar stretches across the bottom of the truck, which resembles an axle with two wheels or roaring sirens. The little curved lines that radiate from those sirens or wheels can indicate sound, motion, or both. 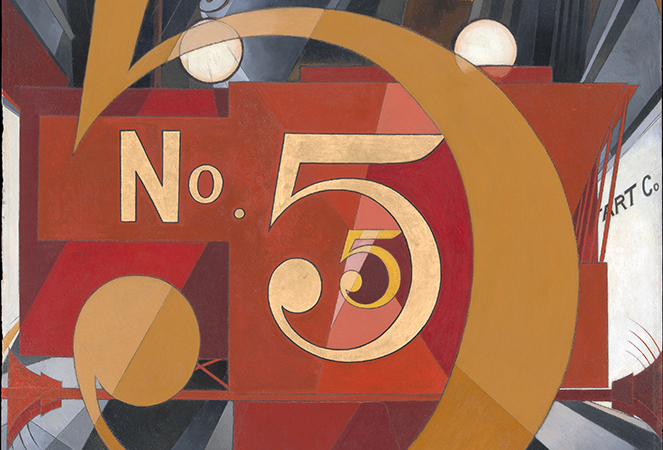 Demuth divided the picture plane into rectangles and triangles, which refract light and change the color of space and shapes. The diagonal lines force your eyes to race around as you try to understand the image. That identifying number five repeats very clearly three times in the center of the composition. The fives get larger as they surge into the foreground (or smaller as they recede into the background), and in the upper right corner you can glimpse the curve of a fourth five as it leaves the surface of the picture and enters your space. The echoing numbers evoke the fire truck as it races toward you and past. Demuth’s painting, with its prismatic chards of space and color and the recurring number five, visualizes the motion and mystery of Williams’ experience in a futurist way. It collapses an extended period of time onto one still canvas. 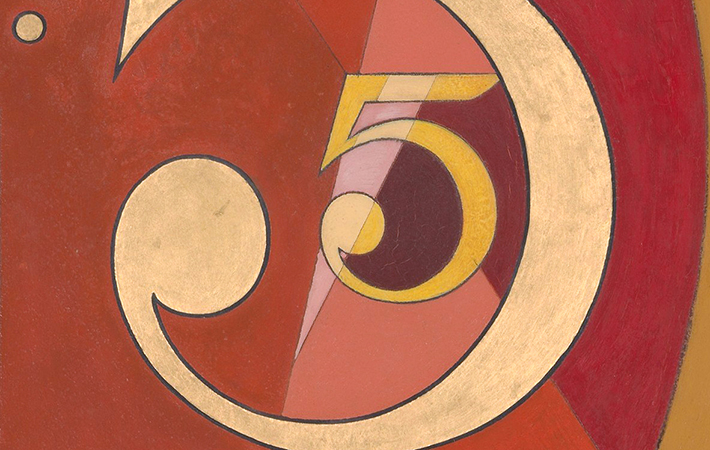 In addition to representing Williams’ poem, Demuth designed I Saw the Figure 5 in Gold as a portrait of Williams. It is one of at least eight “poster portraits” that Demuth completed during the 1920s. All are abstract or symbolic representations of Demuth’s friends, which contain oblique references to their subjects’ identity instead of depicting them in bodily form. In I Saw the Figure 5 in Gold, Demuth included Williams’ initials, W.C.W., at the bottom of the composition. His nickname Bill is cropped at the top, and his middle name Carlos emanates from a skyscraper in the distance (with the “s” on the end hidden behind another structure). These references to Williams are not terribly obvious, though, and they only make sense if you already know to associate Williams with this painting.

The poster portraits function as graphic advertisements for their sitters, but they also included puns or inside jokes that encode Demuth’s friendship with his subjects in more subtle ways. Carlos, which is how Demuth addressed Williams, consists of yellow dots like the light bulbs on an illuminated theater sign, making Williams into a Broadway star. Bill is high in the sky, as if on a billboard above a building, and is a pun on the word “bill,” which can mean poster or ad. Like I Saw the Figure 5 in Gold, the poster portraits that Demuth made of his friends and fellow artists Georgia O’Keeffe and Arthur Dove incorporate their signature subject matter—fruits, plants, and landscapes—and their names, written in popular 1920s commercial fonts and bold colors. 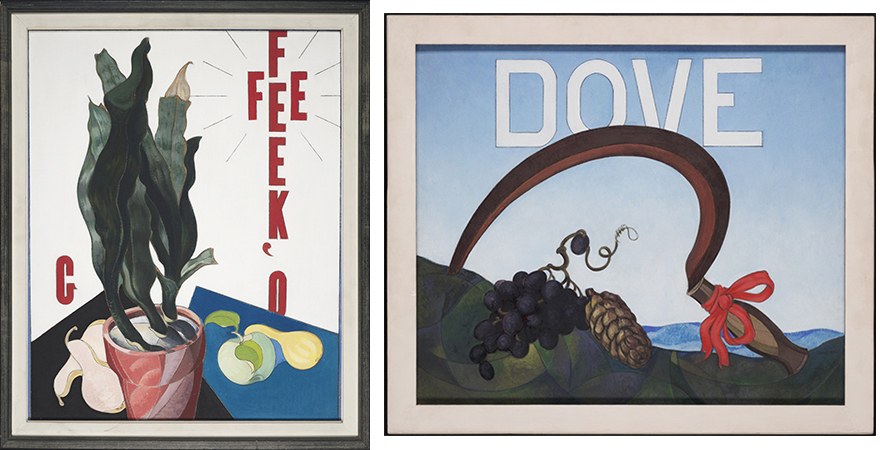 O’Keeffe’s portrait practically shouts the letters of her last name, which people were always misspelling. Here Demuth is telling her (and us) that he knows her well enough to remember how many Es and Fs to include. In his poster portrait, Dove’s scythe has a red ribbon tied around it, a reference to his partner, the painter Helen Torr, who was known to friends as “Reds.” These witty details personalize the images, but only make sense if you know a bit about Demuth and his friends, which is perhaps why critics were slow to appreciate the cleverness of the poster portraits.

Symbolic portraiture as a modernist tactic 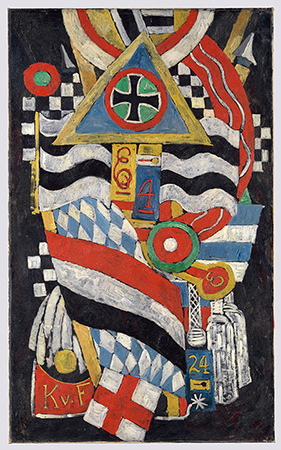 Symbolic or abstract portraiture was in vogue in Demuth’s day. Writer Gertrude Stein made word portraits of her friends, and Francis Picabia and Arthur Dove caricatured photographer and dealer Alfred Stieglitz as parts of a camera. Images like Marsden Hartley’s Portrait of a German Officer, 1914, a painted collage of symbols like flags, chessboards, and parts of a military uniform, are also important precedents for Demuth’s project. As modernists, all of these artists made works that are conceptually complicated, visually abstract, and exciting responses to the challenge of being innovative in the early twentieth century.

This painting at the Metropolitan Museum of Art 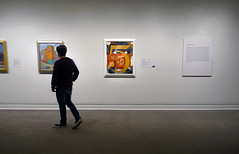 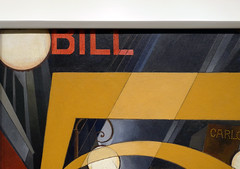 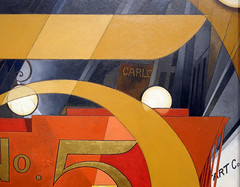 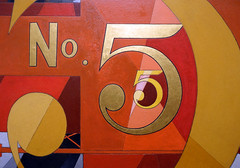 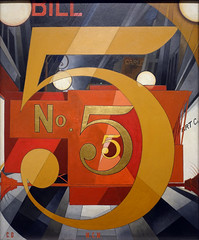