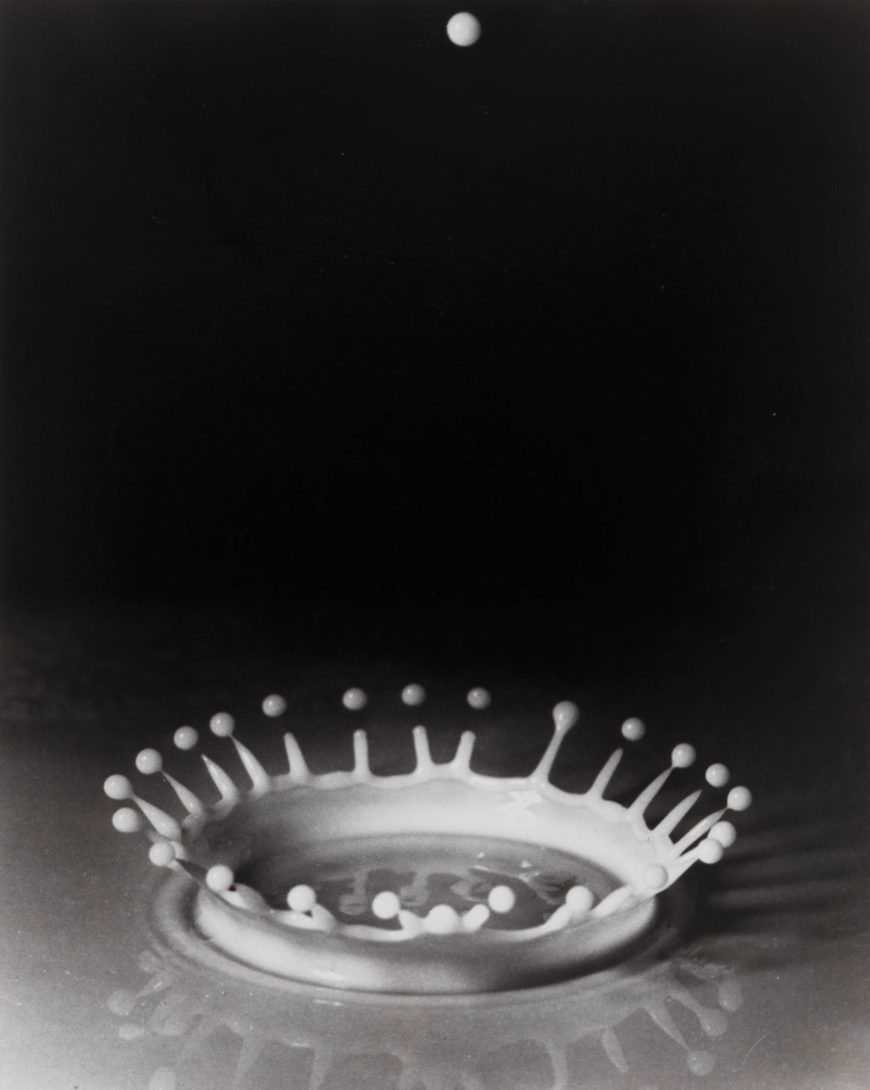 Harold Edgerton’s strobe-illuminated photographs of familiar objects shown in awkward, infinitesimal slices of time captivated the public with pictures of bullets cutting through bananas, lightbulbs, and playing cards, footballs springing from contact with a foot, tennis balls pushing against the racket before taking flight, and golf clubs hitting balls. They revealed the wondrous appearances of commonplace items as they never look to the unaided eye. But Edgerton’s stroboscopy was the culmination of a larger project: photography’s struggle to surpass the “speed” of human vision.

For the first seven decades of its existence as a medium, many practitioners of photography were preoccupied with capturing ever-shorter durations of time. Exposure times steadily diminished in the nineteenth century, thanks to more reactive photochemistry, and advances in lens and shutter design. From 1870 to 1900, this endeavor culminated in the fraction-of-a-second motion studies of photographers such as Eadweard Muybridge, whose batteries of cameras captured subjects in 1/1,000th of a second (far surpassing the sensitivity of human vision, which has an eye-to-brain relay response of 1/10th of a second). [1]

But other photographers pursued a path first suggested in 1851 by William Henry Fox Talbot, one of the pioneering inventors of the medium. Talbot was the first to experiment with open shutters to photograph fast-moving objects in a dark room using spark illumination from Leyden jars. [2] Talbot’s experiments—reiterated by later nineteenth-century Leyden-flash photographers including Arthur Mason Worthington and Charles Vernon Boys—suggested that the speed of photography no longer needed to be limited by the rapid movement of mechanical shutters, but by the speed of light itself.

In 1931, Edgerton developed stroboscopic flash tubes filled with xenon, a conductive gas that creates amazingly bright flashes when triggered by an electrical charge. Strobe lighting allowed him to create highly controlled, bright, durations of light as brief as one microsecond (1/1,000,000th of a second) which he used to create photographs in a pitch-black room, using a camera with an open shutter.

Edgerton’s stroboscope captured thin slices of accessible, familiar objects in a microsecond—including milk drops (as seen in Milk-Drop Coronet Splash, above), hummingbirds in flight, golf clubs and tennis rackets hitting balls, footballs being kicked, water drops and streams, shock waves, bullets in motion, and dancers in mid-step. In Milk-Drop Coronet Splash, a drop of milk landing into a bowl makes an elegant crown shape as tiny droplets rise from its spiky extensions. [3] Another milk drop approaches and promises to repeat this dramatic performance that, to our unaided eyes, would go unnoticed and unappreciated.

After trial and error, Edgerton discerned that a 1/1,000th-of-a-second exposure was sufficient to still a falling drop and a rising splash. It took even more trial and error to trigger the flash to capture the right 1,000th of a second that revealed—in Milk-Drop Coronet Splash—tiny round droplets crowning a dramatic splash. Edgerton photographed milk drops for more than two decades. But perhaps his most famous version, made in 1957, features a reaching crown springing from its collision with the surface of a bright red table. This image was selected by Time magazine as one of the 100 most important photographs of all time. [4] Edgerton also received the Bronze Medal from the Royal Photographic Society of London for his contributions to expanding the boundaries of the medium’s views of time, and for contributing to the development of modern electronic flash technology. Edgerton’s stroboscopy has been lauded as a technological milestone in the medium’s mastery of the temporal fragment.

“Papa Flash” and the Popularization of Stroboscopic Photography

The public was mesmerized by Edgerton’s photographs’ views of commonplace objects frozen in infinitesimal moments inaccessible to the unaided human eye and they were regularly included in the recurrent feature “Speaking of Pictures” in Life magazine from 1936 to 1941. “Speaking of Pictures” appeared near the front of each issue, where reader attention was the highest. Edgerton photographs became so popular that he was invited to have a kiosk at the 1939 World’s Fair in New York City, where visitors could take stroboscopic photographs after pushing a button to shoot a baseball from a cannon through a sheet of glass. It was a noted popular attraction at the World’s Fair. His work also appeared in American Golfer (1933); Edgerton’s life and work were featured in American Magazine (1934); and he was profiled in Fortune magazine (1936). Museums and photography organizations also recognized Edgerton’s work and contributions. In 1933, three of his photographs were exhibited for the first time in the Royal Photographic Society’s annual exhibition in London. Also, along with photographs of a foot kicking a football, a hammer smashing a lightbulb, and a club hitting a golf ball, a similar close-up view of a splash of another milk drop (Drop of Milk Dropping into Saucer of Milk), was included in the earliest exhibition of photography at New York’s Museum of Modern Art, organized by the curator Beaumont Newhall in 1937. In the accompanying catalog, Newhall wrote that until then, “[n]o eye has ever seen the form of a drop of milk splashing into a pan of milk . . . , or the indentation made in a football by the toe of the kicker’s boot.” [5] With its appearance in this landmark exhibition, Edgerton’s work immediately was accepted into the canon of the history of photography.

[3] In 1894, Arthur Mason Worthington captured a crisp image of a splash of a drop of milk by discharging spark illumination from a bank of Leyden jars to achieve a ten-millionths-of-a-second exposure. His work circulated in scientific circles, rather than being published for an audience of the general public. To read more, see: Arthur Mason Worthington, A Study of Splashes (London: Longmans, Green, and Co., 1908). Available at:

[5] Beaumont Newhall, Photography, 1839–1937 (New York: Museum of Modern Art, 1937), 88. The exposure time is identified in the caption as 1/100,000th of a second in duration, which is ten times longer than the duration of the flash of light that Edgerton later claimed he used.