Given the colossal buildings that now cover downtown Manhattan, it can be hard to understand just how distinctive Cass Gilbert’s Woolworth Building appeared in relation to the skyline when it was new, one hundred years ago.

Skyscrapers emerged in Chicago the 1880s as a way to concentrate commercial office functions within the limited space downtown. New engineering technologies like safety elevators and steel-frames allowed Chicago’s buildings to stretch across massive city blocks and rise to ten or twelve stories high. In New York after the turn of the century, a second generation of skyscrapers translated the Chicago School’s innovations into an entirely different, even more monumental aesthetic. The Woolworth, standing on Broadway at the southwest corner of City Hall Park, is a key example of the New York style that developed in the first decades of the twentieth century.

Frank Woolworth conceived of his new corporate headquarters as the ultimate advertising campaign, a luxurious tower that would reflect his own personal wealth and the success of his five-and-dime stores. Perhaps viewing himself as an heir to the great merchant princes of medieval Italy, Woolworth sought bold architecture and economic advantage, including rental income from tenants. Woolworth hired the architect Cass Gilbert, then known primarily for his Beaux-Arts style civic buildings and art museums, to turn this dream into reality. 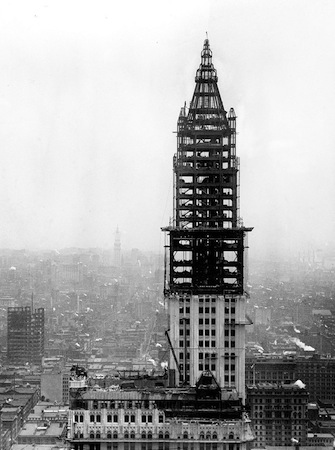 Gilbert utilized the most advanced steel-frame construction techniques of the time allowing the Woolworth to sound 57 stories to 792 feet — the world’s tallest building until 1930.

In contrast to the relative horizontality of Chicago skyscrapers and the sharp divisions between base and tower of earlier New York skyscrapers like the Singer Building (1908), every aspect of the Woolworth’s composition and decoration is oriented up, creating a continuous vertical thrust.

The tower sits flush on the Broadway side of the large V-shaped block that contains City Hall Park. This means you can view Woolworth from a distance and see its full height with an unobstructed view, rare in such a densely built area. The result is that the tower seems to move endlessly upwards. The building’s white-glazed terra-cotta tiles accentuate the piers that run from base to top with few interruptions from cornices or the window spandrels.

The building’s decorative neo-Gothic program only adds to this sense of monumentality. On the exterior, ornate sculptural arches, finials, and gargoyles over-scaled enough to be read from street-level, refer directly to European medieval architecture, and draw the eye towards the heavens in the same manner as a High Gothic cathedral. 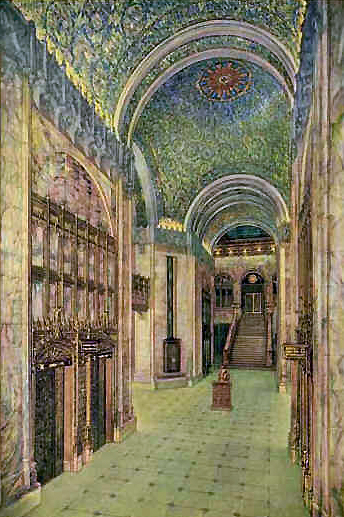 Inside the building’s barrel-vaulted lobby, walls covered with lavish mosaics and stained glass allude to even earlier examples of Christian art and architecture. Yet, as contemporary critics noted, the Woolworth was a tribute not to religion, but to capitalism.

The form of the New York skyscraper would soon shift again with a 1916 zoning law. This regulation used a building’s “footprint” to ensure that sunlight and breezes would reach the city’s narrow streets far below. The “1916 Setback Law” led to the “wedding cake” massing and streamlined style of the Chrysler Building (1930) and Rockefeller Center’s RCA Building (1933), among many others. Just as with Woolworth, skyscrapers continue to serve as important symbols for the corporations that commissioned them.

Essay from the Skyscraper Museum